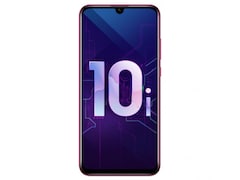 Honor 10i is powered by an octa-core HiSilicon Kirin 710 processor. It comes with 4GB of RAM.

The Honor 10i runs Android Pie and is powered by a 3400mAh battery.

The Honor 10i runs EMUI 9.0.1 based on Android Pie and packs 128GB of inbuilt storage that can be expanded via microSD card (up to 512GB).

Connectivity options on the Honor 10i include Wi-Fi and NFC. Sensors on the phone include fingerprint sensor.

It was launched in Blue, Red, and Black colours.

Honor 10i User Review and Ratings