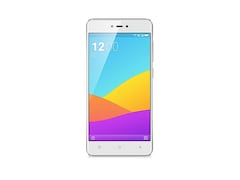 Gionee F103 Pro is powered by a 1.3GHz quad-core processor. It comes with 3GB of RAM.

It was launched in Gold, Grey, and White colours.