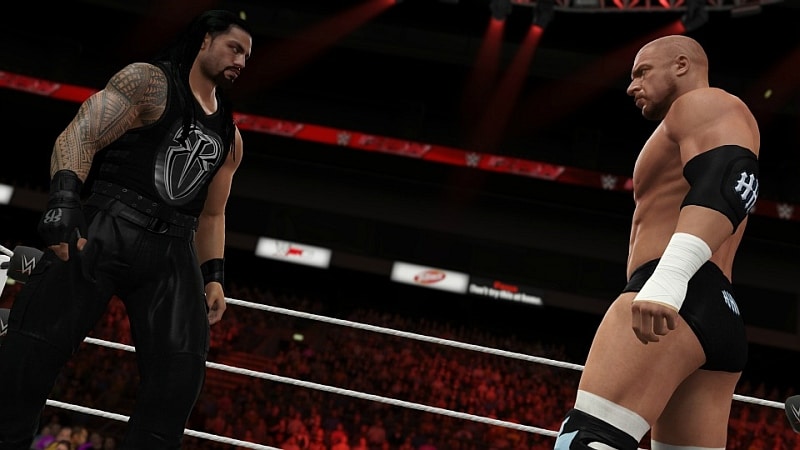 WWE has been a fixture in gaming since back when the company was still called WWF. The games used to be goofy and unreal, but we've been moving closer to simulation ever since the WWE 2K series started. Five years in, the series is starting to feel long in the tooth. That's not to say that WWE2K17 isn't fun - just that it feels too familiar to last year's game, and the changes that have come aren't all positive.

Sports games such as FIFA get yearly updates which feel like small changes, and today, the same can be said about the WWE games. It's a successful franchise that gets a lot of things right - and this makes change very challenging. Instead, what you get is a game that's increasingly polished, and WWE2K17 is certainly polished.

Some of the 120-wrestlers on the roster, such as John Cena, look like they're on TV and not in a game. The moves, the attitude, and the camera cuts - it's all very familiar, and it's helped along by an audio track made up of licensed tracks that you've likely heard before. This is a great looking game that sounds amazing too - though it's not really very different from the last two games in the series. Still, if you're sitting down with a couple of friends to mess around with the game, you're going to have a good time.

Submissions seem to have been improved slightly from last year's iteration - something we had complained about at the time. The fights themselves are polished and well executed. You'll spend a lot of time pressing the right trigger (the reversal button) on the Xbox One, while the left trigger is used to start running. A running grapple, a flurry of hits, a signature move, and then a finisher - the controls flow smoothly and the game is pretty easy to get started with, so you'll be wiping the mat with your opponents in no time.

The AI opponents aren't particularly challenging in the moment-to-moment gameplay of matches, though it sometimes feels like the computer is cheating when it comes to things such as recovery and stamina. If you've spent the last 15 minutes reducing someone to a mushy pulp without taking so much as a single punch, there can't be any justification for losing in the last second. It's a long running complaint we've had with the series, and every year makes us realise it's unlikely to change soon.

With WWE2K15, the series had tried to get a lot more technical, and ended up being a nonstop series or reversals. Last year, this was improved a little, and WWE2K17 seems to have made reversals a little better. The matches go a little quicker as a result, and it's easier to maintain your momentum.

What's not really changed in all this time is the overall flow of the matches. A Rock Bottom always looks great, but the impact on the match can be really limited. Stunning visuals and audio design notwithstanding, the big moves still feel feeble, and the matches themselves end up being muted affairs. Gone is the over the top action that the 'WWF' games used to feature - we're pretty clearly in the WWE era now.

Meanwhile, another thing that is likely to irk people who've played earlier versions of this game is the amount of content that's locked behind paid DLC. This includes a number of wrestlers, but also the popular Showcase mode, that allows you to re-live famous moments of WWE history, the feuds between superstars, and the famous eras of the show.

Instead, the My Universe mode has been tweaked, but it still remains more fun to just fire up random matches on your own without bothering with all the different menus of the former. Speaking of menus - the interface itself is pretty simple but the endless scrolling roster of wrestlers can make it hard to see at a glance who all you can pick from.

There's also Create a Wrestler mode, which is, in our hands, only good for creating atrocities that can only be rightly described as crimes against nature. That being said, there are definitely people who are a lot more skilled than us at fiddling with the many, many sliders that are available to you when creating a custom wrestler, and you can follow instructions online to find out exactly how much an eyebrow ridge needs to be tweaked to create just the right wrestler.

You can take your creation into Career mode and play your way through the WWE. It's a fun idea, and one that the company has been tweaking for a while now, but there's still something very contrived about picking dialogues for your wrestler, and stumbling into rivalries and alliances. All-in-all, it's what you'll probably end up doing the most when you're playing by yourself, but it's when you're playing with friends in the same room that WWE2K17 really starts to shine.

Much like the games before it, the forgiving nature of the fights and the over the top visuals makes it a lot of fun to play with friends when you're not actually taking things seriously. In that sense, the series has constantly delivered, and WWE2K17 is no exception. If you've not got any of the earlier games, this is a good one to add to your collection. Dedicated fans will of course pick up the game no matter what we say. For everyone else... if you've already got WWE2K16, then wait for a price cut. Not enough has changed to justify buying it at full price.