Wizard of Legend for the Nintendo Switch is developed by two-man game studio Contingent99 and there are plenty of telltale signs of its indie roots. From its pixellated art style similar to other indie outings like Broforce and Stardew Valley, to its roguelike gameplay stylings akin to Asura and Darkest Dungeon, it might seem like there’s little to separate Wizard of Legend from the crowd. But is there more to it? Read on to find out.

As the name suggests, you’re a wizard and you’ve been invited to participate in the Chaos Trials. It has you taking on a series of dungeons filled with enemies galore. You’ll equip magic spells and customise your cloak, which lets you buff your health and movement. In addition to this, you also have gear that can be used to customise your playstyle, like letting you to do more damage when you have low health, or reducing the time taken for you to cast spells.

Despite an aesthetic styling that mimics its peers, Wizard of Legend stands out thanks to its use of colour. Set in a world where you’ll be traipsing dungeons galore, Wizard of Legend for the Nintendo Switch is far from a dreary, dire looking game. Be it icy prisons, fiery lairs, or even the special effects of the spells you wield, there’s a lot going on that keeps it from looking stale. Throw in some unique enemy designs ranging from giant blobs to spear-throwing knights as well as interestingly drawn out non-playable characters such as merchants and magic boxes that assist you on your journey, and you have a game that while borrowing from known visual tropes, manages to stay fresh. 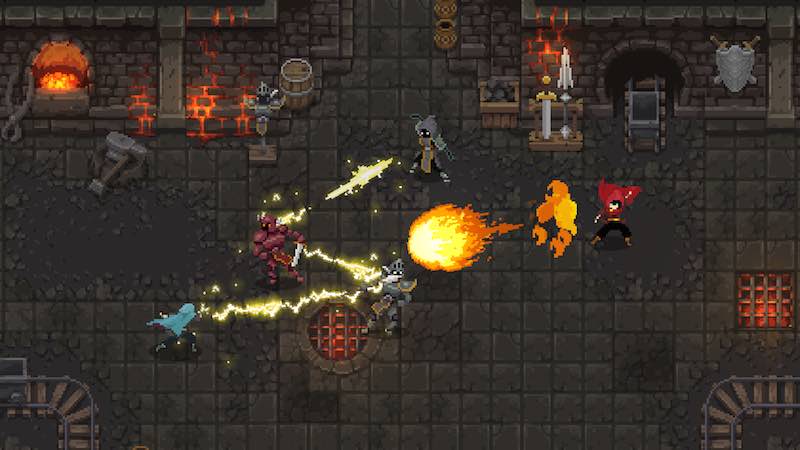 This extends to its story as well. While most roguelikes take perverse pleasure in throwing you into its many rooms filled with fatal foes with little in way of exposition, Wizard of Legend spends a good amount of time setting up its lore and plot, and it does so well. The opening minutes have you going through a museum that explains the game world’s twisted history of wizards before dropping you into the fray. It’s a welcome starting point that gives you an idea of what to expect, while also serving as introduction to the game’s mechanics and systems at play.

The moment to moment gameplay of Wizard of Legend for Nintendo Switch is surprisingly fast. A tap of a button lets you dash across chasms, while casting spells is just as fast. There are plenty to choose from and use at will. From fireballs that push soldiers off ledges, to icicles that freeze archers in place, or elaborate dragons that tunnel through the ground before hitting demons, the variety is immense and encourages experimentation. Outside of some spells that home in on your targets, you’ll have to aim at them for the most powerful attacks, giving Wizard of Legend an added dimension of skill. It demands precision without feeling unforgiving thanks to the wide radius of most spells. Combined with an easy to use dash move to evade incoming strikes makes it feel fair.

Games based on the Unity engine have often had issues on consoles, but Wizard of Legend is technically sound and we didn’t run into any glitches. Regardless of playing it in docked or handheld mode, the frame rate didn’t skip a beat, remaining fluid even in scenes with a lot going on. That said, it would be a lot more convenient if the game explained what you actually get from most of its stores. You don’t have an idea of what each piece of gear does before you buy it and the same applies for spells and cloaks. While it does add a sense of randomness to the proceedings, it’s a bit frustrating as the currency you earn from each dungeon run is limited and making decisions on what to buy for the next isn’t something everyone would like to leave to chance. Thankfully, it’s not a game breaking concern by any means, but it can be annoying if you’re the sort looking to perform the perfect run through Wizard of Legend’s many challenges.

All in all, Wizard of Legend has more than enough to set it apart from the myriad of indie titles right now thanks to its slick controls, variety spells, and welcome emphasis on lore. At $15.99 on the Nintendo eShop (around Rs. 1,080), it’s well worth the price of admission despite some minor stumbling.