It’s barely been a year since Uncharted 4 hit the shelves, so you can’t be faulted for thinking that Uncharted: The Lost Legacy is just a cynical cash grab. Series stalwart Nathan Drake is gone and so are Elena and Sully, his merry supporting cast. Instead, there's treasure hunter Chloe Frazer and mercenary Nadine Ross - two strong female characters who debuted in Uncharted 2 and Uncharted 4 respectively. They’re a far cry from the roguish charms of Drake and Sully, but they end up being more than competent replacements.

They’re strong personalities with interesting back stories that are fleshed out through the game. It works well and comes together quite naturally with their unsteady alliance giving impetus to the proceedings, helping keep Uncharted: The Lost Legacy fresh. That's necessary, given that the familiar loop of exploration, platforming, shooting, and puzzle solving that is core to the gameplay experience hasn't changed much. It’s a well worn formula but it doesn’t feel stale, thanks to Ross and Frazer.

Throughout Uncharted: The Lost Legacy, you control Chloe Frazer, while Nadine Ross is AI-controlled. Ross ends up being crucial in battling your foes, working with Frazer for some spectacular takedowns. This time around, puzzles aren’t as easy as previous games - a welcome change as you’d be forced to think more than usual and the outcome feels all the more satisfying. At the same time, if you fail often enough, Ross chimes in to help out, so you don't get stuck.

What’s new is lock-picking. You’ll be able to break into crates in combat areas for powerful weapons such as scoped pistols and rocket propelled grenade launchers. It’s a minor but interesting addition to the formula that helps you even the odds. Stealth mechanics, which were introduced in Uncharted 4, also help make the action sequences more enjoyable.

Uncharted Lost Legacy also expands the faux open-world elements of Uncharted 4 by giving you a sprawling region to explore in any way you choose. You can approach objectives in this area as you see fit, although it is nowhere close to the level of interactivity you’d assume from most conventional open-world games.

This open-world region makes up the first part of the game, but before you know it, you’re back to Uncharted staples of linear story-based levels, replete with puzzles and disposable soldiers to shoot. Nevertheless, Uncharted Lost Legacy is a solid attempt that makes us look forward to whenever Naughty Dog decides to take on the open-world genre in earnest. Another decision that makes Uncharted: The Lost Legacy feel unique is the choice of locale - India. This adventure takes place along the Western Ghats. You’ll uncover the mysteries behind the Hoysala Empire, as you search for the tusk of Ganesh, while battling rebels plotting to take over the nation.

Without spoiling much, there is an interesting plot riddled with enough intrigue to keep you playing till the very end. Much like prior Uncharted games, there’s nothing offensive in its portrayal of ancient history and legends. The source material is tastefully represented, with near perfect explanations of Hindu mythology, collectibles aplenty that drop nuggets of information on the Hoysala Empire, and gorgeous locales such as gigantic cities carved from rock.

It helps that all of this is beautifully rendered. Uncharted: The Lost Legacy is a visual spectacle even on a normal full-HD TV. From blades of grass to colossal statues, and even the nuanced facial expressions of its characters, this is perhaps the best looking game on the PS4 and PS4 Pro right now. Throw in an enhanced photo mode with a wealth of filters and options as well as HDR support, and Uncharted: The Lost Legacy is a treat for the eyes. 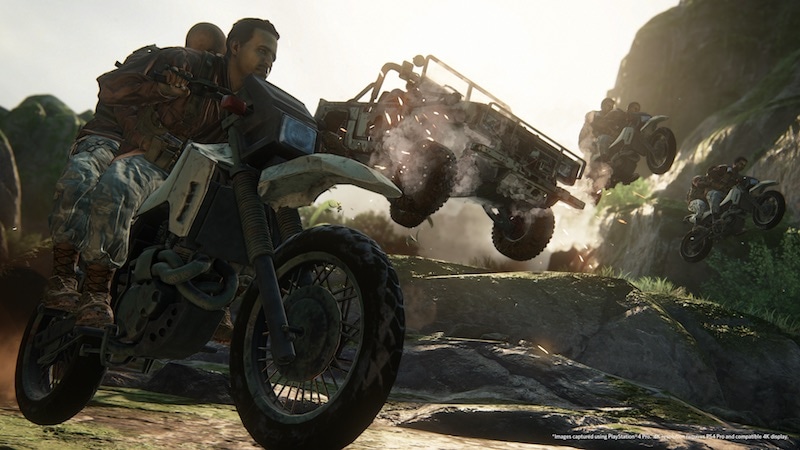 In terms of pacing, it is a rollicking ride through and through, with barely a moment to take a pause. You won’t find any filler moments here, unlike Drake playing Crash Bandicoot in Uncharted 4, or a scene from the childhood of either hero, as was the case with earlier Uncharted games.

Clocking in at around six and a half hours, Uncharted: The Lost Legacy is a worthy entry in the franchise and far from a cash grab. Considering its budget price tag and the inclusion of Uncharted 4’s full multiplayer suite, it’s an unexpected, albeit superlative return to a franchise that’s been consistently entertaining.

product Is PS4-exclusive Uncharted: The Lost Legacy worth playing? We tell you.
Comments