Transistor for iOS Review: As Good as It's on the PC 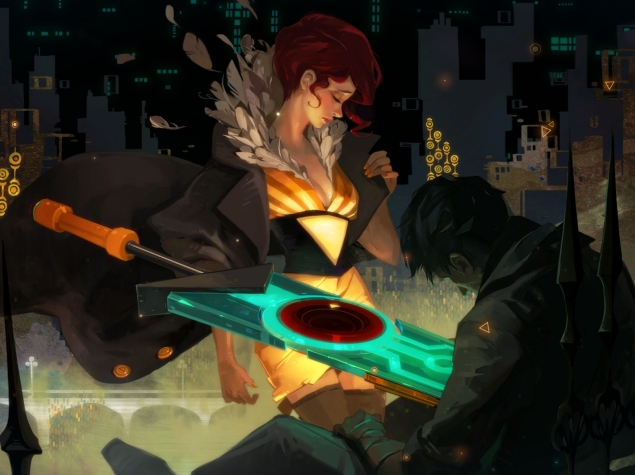 Transistor - made by Bastion creators Supergiant Games - first released in May 2014 for the PlayStation 4 and Windows, followed by Linux and OS X versions in October. Following in Bastion's footsteps, the game was released for iOS devices earlier this month.

We'd played the PC version last year and loved it, so purchasing Transistor on day-one was an obvious choice. But how has it fared in the journey to mobile devices, and should you buy this game for your iPhone or iPad, especially if you haven't played the PC or PS4 version?

Before talking about the porting of Transistor, it's important to get a measure of what this game is, in the first place. If you're already familiar with the game, and just want to know about how it handles on mobile devices, you could just skip the next section of this article. On the other hand, if you're a newcomer to the game, the introduction will help you understand what Transistor is all about, and why you might want to play it. 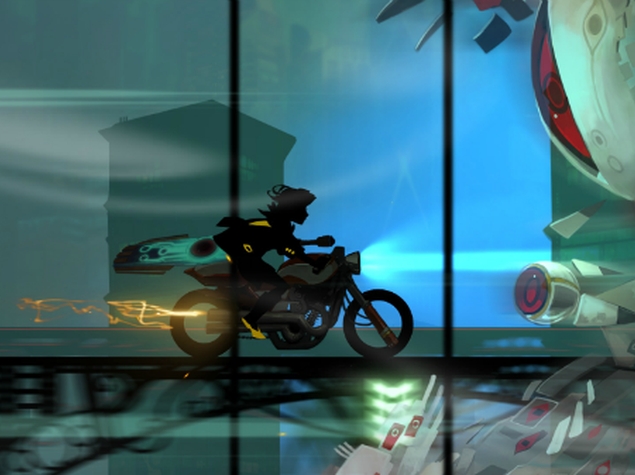 So, what is Transistor?
Transistor is the second game made by Supergiant Games. The small company is (justifiably) famous as the developer of Bastion, which was a top down action-adventure game where you travel through a dystopic world fighting off an eclectic set of enemies with a collection of weapons that you can upgrade over time, accompanied by a beautiful soundtrack, an innovative, expositionary style of narration, and utterly gorgeous art and design.

Not surprisingly, that could also be a description of Transistor. While the basic idea remains the same in both games, the way it is executed - whether we talk about gameplay, the visual aesthetic, or the use of audio - all help to make Transistor a very different, yet equally beautiful experience.

Transistor puts you in the shoes of Red, a popular singer in the city of Cloudbank. You start the game pulling out a giant sword (the Transistor) from the body of a dead man, and things start to go in unexpected directions right away as the sword starts talking to Red.

Red herself doesn't speak - exposition happens through the Transistor's conversations with Red - and right from the start you're digging through the backstory to figure out what's going on. 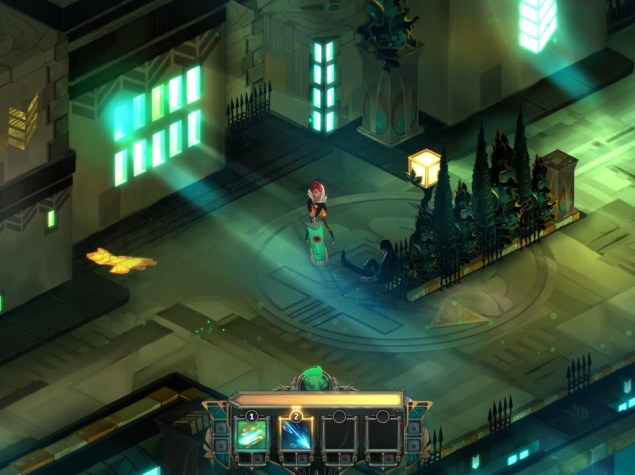 Like Bastion, the world of Transistor has a beautiful, almost hand drawn feeling to it, but here everything is much sharper, much more angular. Like Bastion, the world is largely empty, except for your enemies, but there are now various computer terminals spread throughout the world where you will learn further snippets about the game's history, or just order some food from a restaurant.

But the real difference comes in combat; Bastion played out like an arcade game, with dodge rolls to get out of trouble, letting you hack and slash away the rest of the time.

Combat in Transistor is very different and much more deliberate. Enemies frequently ambush you, herding you into tight corners, and while you can fight them with your different weapons, Red would be quickly overwhelmed, except for the fact that you can pause time, to program in a sequence of attacks. When that happens, Transistor becomes a turn-based game, where you can think tactically to take out your enemies. You get to plan out your turn, and then execute the attacks in real time, before starting a new turn.

Do it right, and you could dash around enemies, stunning them on the way if you have the right power-ups, deliver a deadly chained backstab to cut a swathe through your opposition, and end your turn safely behind cover. 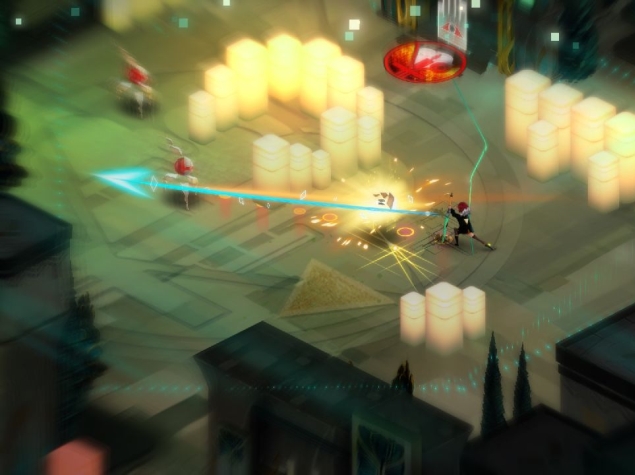 Of course, there's an energy limit to these attacks, and you could find yourself in a much worse situation than you were at the beginning of your turn if the positioning of enemies and cover doesn't lend itself to this kind of ninja attack. In which case you're going to be running around hopelessly while your attacks recharge, an easy target for your enemies.

Real time attacks on the other hand keep you in the battle without worrying about energy; the game isn't shy about tossing a lot of powerful enemies at you though, so planning out your turns is pretty much essential. As the combat gets more hectic, you'll learn to mix and match real time attacks with planned turns, and the fights can become far more complex.

Collecting weapons and power-ups is also a way to experience more of the game's story as well - as you progress, you'll find people dying, and "absorb" them into the Transistor. You get a bit of exposition from the sword when you do that, but it's in the functions menus you find that you can learn a bit more about the personalities that are powering your different attacks as well, and learn how they tie in to the overall story of the game.

The story itself is satisfying, and if it touches a lot of familiar tropes and hits expected narrative beats, it is still very well executed, much like the rest of the game. If the game and the characters don't feel quite as heartfelt as Bastion, they are nonetheless quite compelling. The art, and the music are exceptional; much like Bastion, Transistor is an intensely immersive experience that frankly overwhelms your senses. 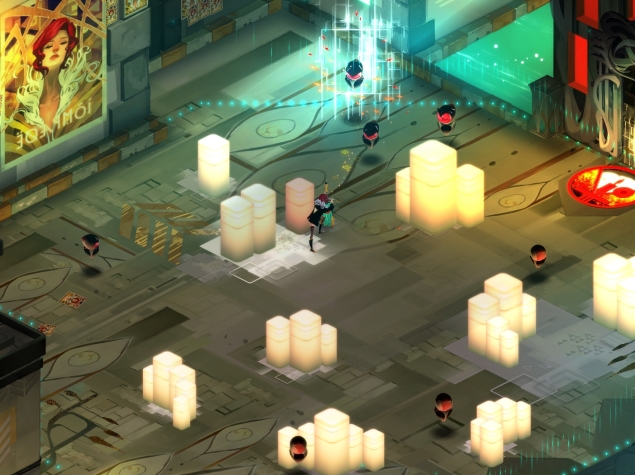 How well does it work on my phone/ tablet?
Considering it's a fairly recent console game, it's no surprise that Transistor works with a relatively limited set of iOS devices. The game requires at least an iPhone 5, iPad 4th generation, or iPad mini 2, and it's just under 2GB to download.

We played the game on an iPad 4th generation, and Transistor played incredibly smoothly. It also looks fantastic, and it doesn't look like the visuals were sacrificed in any noticeable way to make it to mobile devices.

To play, you can either use classic controls (which features a virtual joystick) or you can point and click on the screen to move around. The former option is much better for the combat segments, which are a big part of the game, while the latter is much more convenient for general exploration.

We did try using the game with a borrowed gamepad, and the experience is definitely much better like that. We did complete the full game even without a gamepad though, and found it perfectly playable. The combat segments on the iPad definitely suffer when compared to the PC version - that's because quickly dodging attacks isn't easy with either the virtual stick or tap to move controls. Real time combat suffers, even though the difficultly seems to be dialled down a fair bit. Loading a turn is a lot easier of course but as the game progresses and combat gets more complicated, you're going to need a mix of real time fighting and programmed turns, which can get a little frustrating. 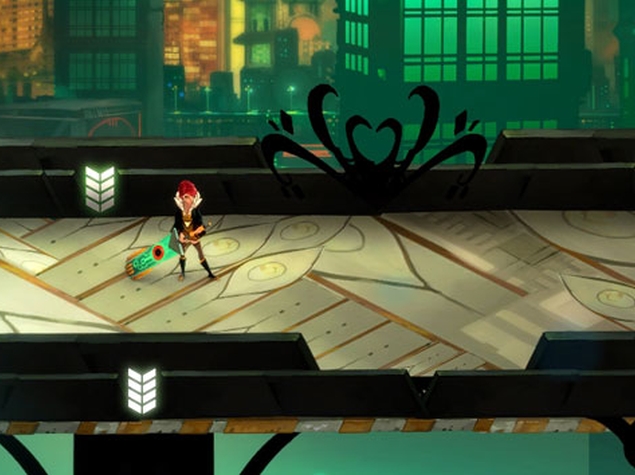 Complicating matters a little further is Transistor's death mechanic - instead of killing you, the game takes away one of your Functions (your weapons), making it even harder to win a fight you were already losing. There will be a few times when the game actively screws you over thanks to the controls. That's why planning your turns perfectly is even more important in the iOS version of the game than it was in the original version.

Despite this small quibble though, there's no denying the Transistor is a beautiful, and engrossing experience that everyone should be able to enjoy. At Rs. 620, it's definitely more expensive than most mobile games, but we'd argue that it's well worth it, particularly if you want mobile games to become more sophisticated than Candy Crush.

If you've not played Transistor before, we'd strongly recommend the game now. If you have played it on your PC or PS4, then you already know what the game is like; all we can add is that the port doesn't have any noticeable issues and it looks great too. The controls can be a little frustrating in a few fights, but work really well for the most part, and if you have a gamepad then this isn't even a consideration.

Transistor is out now as a universal app for iOS devices. You can download Transistor for Rs. 620. It is also available on Steam for your PC on Windows, OS X or Linux; right now you can also get the PC version of Transistor for $4.99, or approximately Rs. 310 as part of the Steam Summer Sale.