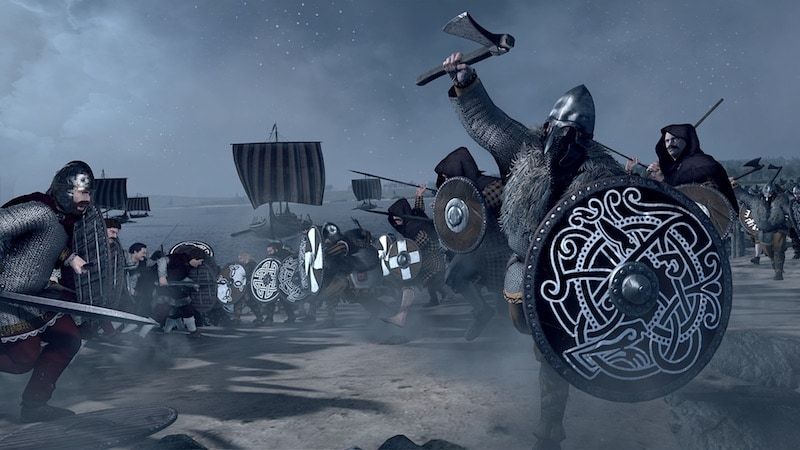 Total War Saga: Thrones of Britannia is the latest in the long-running Total War series of strategy games. Previous entries were set in feudal Japan, the Roman Republic, and even using developer Creative Assembly’s mix of turn-based and real-time strategy flair in established universes like Warhammer. Set in 878AD, the world of Total War Saga: Thrones of Britannia is one of an uneasy peace. You’ll control one of ten factions belonging the game’s five cultures — Anglo-Saxons, Gaelic clans, Welsh tribes, Great Viking Army, and Viking Sea Kings — and you’ll be challenged with re-writing the future of Britain.

As epic as it sounds, most of the action takes place on a highly detailed map of the area rather than immediate, boots on the ground fare. You’ll raise armies, forge treaties, ensure your vassals are in check, and do whatever is needed to maintain your reign. Each turn has you taking these decisions with an adviser notifying you of possible problem spots, such as a paucity of food, or a brewing rebellion. While Total War veterans will be right at home with Total War Saga: Thrones of Britannia’s depth, which lets you manage every aspect from recruiting new soldiers to deciding if your loyal nobles should divorce their significant others in order to keep the peace, newbies will likely feel overwhelmed with the number of systems at play.

Whether you're monitoring the loyalty and influence of your underlings and keeping them in check to prevent an uprising, or maintaining War Fervour — a state in which your populace gets itchy feet for your armies to wage war, allowing for significant bonuses - there’s a lot to take in. Most of it is explained well enough, but if you’re expecting a significant amount of handholding and tutorialising like most new games, think again.

Rather, Total War Saga: Thrones of Britannia teaches you the ropes by putting you in dangerous situations. You’ll learn the drawbacks of stationing your armies to close to your capital when your allies turn on you and mount a coup in neighbouring provinces — namely, the time taken for your forces to reach these areas, usually several turns, allowing your newly minted foes to consolidate their position.

Each faction has unique traits too. In our playthrough as the Anglo-Saxon kingdom of West Seaxe under King Alfred, we made generous use of Fyrd — a system that allowed us to recruit more soldiers based on the settlements we had. Because of this, however, keeping public order was impossible with citizens outraging over excessive conscription.

Nonetheless, the game had us coming back for more thanks to Dilemmas. These are scenarios force you to make decisions that could wildly alter your game. From choosing to pay off a Viking horde tearing through your settlements instead of facing them head on, to dealing with vengeful subjects by stripping them of their estate or ending them outright, these questions kept us playing to see what new political drama Total War Saga: Thrones of Britannia would throw at us next. Every turn and decision felt more immediate than in past entries due to the game’s razor-sharp focus on historical moments, instead of an entire era.

It helps that you don’t need the latest and greatest to play Total War Saga: Thrones of Britannia either. The game ran well on our gaming rig sporting an Intel Core i5 3470 processor, 16GB of RAM, and an Nvidia GeForce GTX 1070 and was playable Dell Inspiron 13-inch laptop with integrated Intel 620 graphics after tweaking a few settings. With most of the action taking place on a map littered with text boxes, this should come as no surprise. But with the trend of PC games having demanding specifications, it’s nice to know that Total War Saga: Thrones of Britannia scales quite well.

All in all, Total War Saga: Thrones of Britannia is solid entry in the franchise. It’s not exactly the most accessible for newcomers but once you come to grips with its depth and scale, you’re treated to solid sessions of political intrigue, backstabbing, and drama galore.

Gadgets 360 played a review copy of Total War Saga: Thrones of Britannia on a PC. The game is available via Steam at Rs. 1,339 .