In one of the three opening vignettes for Ron Gilbert and Gary Winnick's (both ex-LucasArts developers known for their work on Maniac Mansion, and Monkey Island series) new point-and-click adventure game Thimbleweed Park, a town sign proudly states: Population 81. Then, a bullet hole opens in the middle of the board, and a few seconds later, the population count changes to 80.

For the game’s thousands of Kickstarter backers, who contributed over half a million dollars towards development, it’s a scene they must have already come across, as it was part of the original video pitch. But even now, despite a delay of nine months beyond its predicted completion, the tiny moment is as funny as it was the first time.

This kind of black humour, along with a heavy dose of wit and sarcasm, is present throughout Thimbleweed Park. For one, the game regularly breaks the fourth wall, and is self-referential to the fact that it's a video game made of giant pixels that resembles the 90s’ era. And it’s a deliberate move on part of the makers, to tap into a wave of nostalgia that LucasArts holds with its classic adventure games.

As it harkens back to the point-and-click world, Thimbleweed Park operates with a split view – the top two-thirds of the screen displays its 2D world, while the bottom third is devoted to player actions and character inventory. You move your character around by pointing and clicking with a giant four-point cursor, or holding/ double-clicking in a particular direction to move them faster. You can also use nine keyboard keys – 3x3 from Q across C – to choose the desired action.

To interact with anything that you see, you need to form crude sentences with the actions available to you, including ‘Open’, ‘Close’, ‘Pick up’, and ‘Use’ among a total of nine. If you’ve played 90s adventure games, you know how it goes. To go through a door, you’d click on Open, and then click on the door. These actions can also be paired with items you carry. If a door needs a key, you’d choose Use, then pick the key card in inventory, and then click on the door. 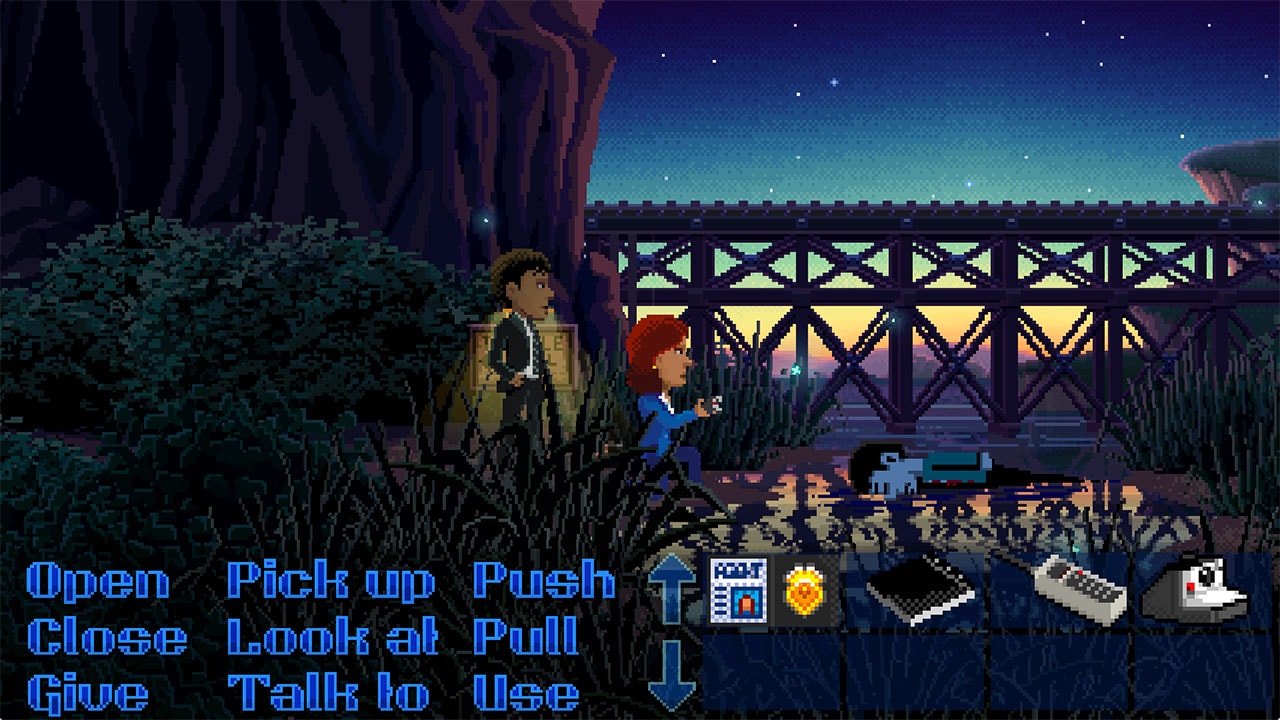 A murder mystery kick-starts the events that take place in and around the small town, introduced to us through two FBI detectives – Agent Ray, and Agent Reyes. Ray is a veteran, and her long career has turned her into a deeply sarcastic woman, and a misanthrope in some form. That’s why she prefers working alone, and gets upset at having to take part in any human interaction, letting out loud sighs with every line, and showing disdain for nearly everything.

Reyes, on the other hand, is fresh off his training. Eager to learn, and please, the police force pairs him with Ray. Or so he says anyway. Now stuck with each other, the two want to solve the murder case on their hands as quickly as possible, so they can get out of the lonely, depressed town that is Thimbleweed Park. Or so they say. Hey, it’s a murder mystery.

But those aren’t the only playable characters. As you dig deeper into the game’s mystery – the dead body turns into a small concern few hours in – you’ll come across three other characters, all introduced through playable flashback chapters of their own. The oddest among them is Ransome the *Beeping* Clown, a famous old comedian with a knack for insulting jokes. His constant cursing, beeped out for rating, complements his behaviour and mood that have got him into a pickle.

Then there’s Dolores Edmund, a young woman who belongs to the famous and respected Edmund family of Thimbleweed Park. That fame is down to her late uncle Chuck Edmund, who’s a local hero thanks to his creation of the Pillow Factory, which brought money (and, in turn, development) to the town. But Dolores has no interest in running the family business. Instead - much to the distaste of everyone around her - she wants to be a video game developer, and the game gets out a lot of commentary on the state and world of video gaming through her, as well as the life of developers themselves.

Then you have a ghost version of Dolores’ father, Franklin. Unlike his admired brother, Franklin lacked any great achievements of his own, and perpetually lived in Chuck’s shadow. The fact that he has the least game time of all five characters plays into that, as funny and depressing as that is.

As the local town-folk (non-playable characters, aka NPCs) engage in conversations with the two detectives, they reveal the lives of the other three, and cast suspicions in their direction, in regards to the murder. Once you’ve encountered all of that, you can switch between all five characters at any time, as you go about checking things off your literal to-do list, handily located in your inventory. 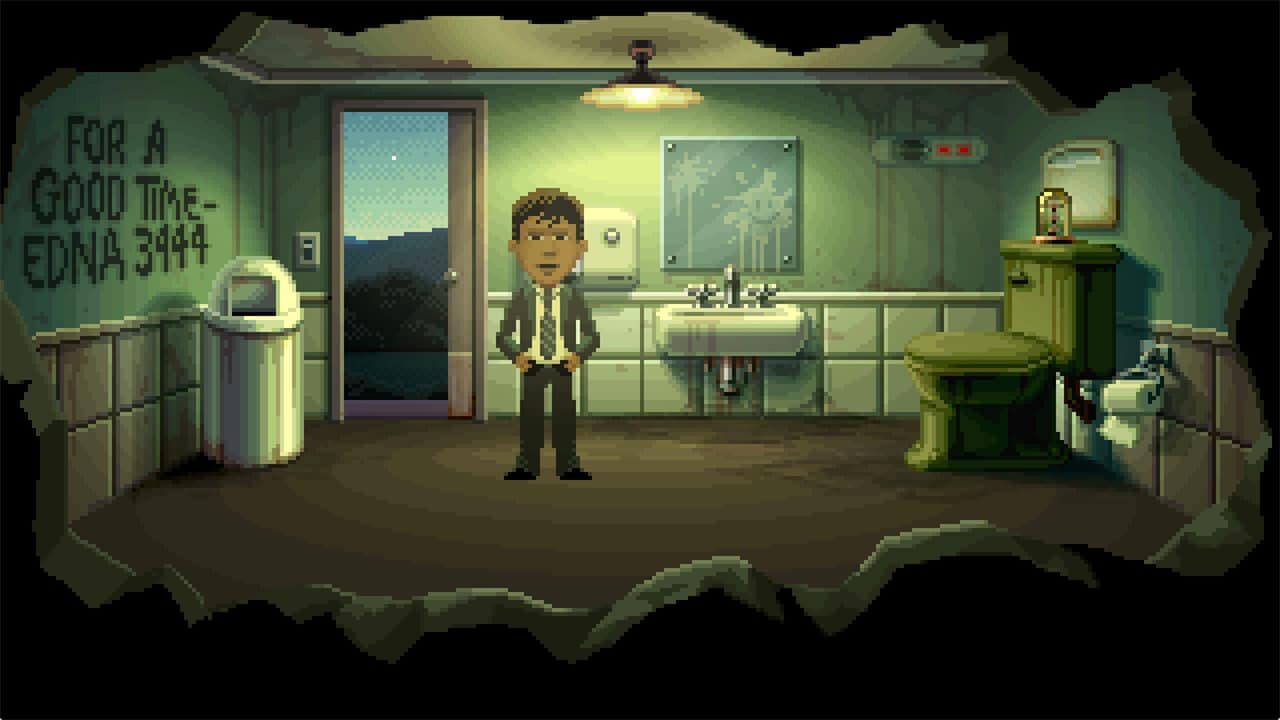 “Are we all in a video game?!”
Gilbert brings his signature black and meta humour to everything in his path, and comments on a whole variety of topics – from misogyny, and sexism to the concept of free-will, and from supernatural happenings to simulated reality – across Thimbleweed Park’s 10-hour playthrough.

Early on, a character wonders out loud whether they should save their game, should they end up dying, seemingly alert to the fact that they exist only on our computer screens. Almost immediately, an NPC sneakily adds in fact there are no dead-ends in the game, so you need not be worried. Such dialogue flows into the co-creator’s thinking with video games, which had its origins with The Secret of Monkey Island, a quarter of a century ago.

Gilbert has always wanted adventure titles to be more about exploration, which is why dying in that 1990 classic was almost impossible. In Thimbleweed Park, too, there are no ways to end up dead, and the only way to bring up a ‘Game Over’ screen is so in your face that you'll have to voluntarily go through with it.

When the spotlight is put on Dolores (who is great with computers, and caused ripples within the family with her wishes) Agent Ray remarks: "Hmm, a woman with a brain. Definitely suspicious." It’s a nice way of taking on the prejudiced culture against women at work in general, and in the video games circles in particular. 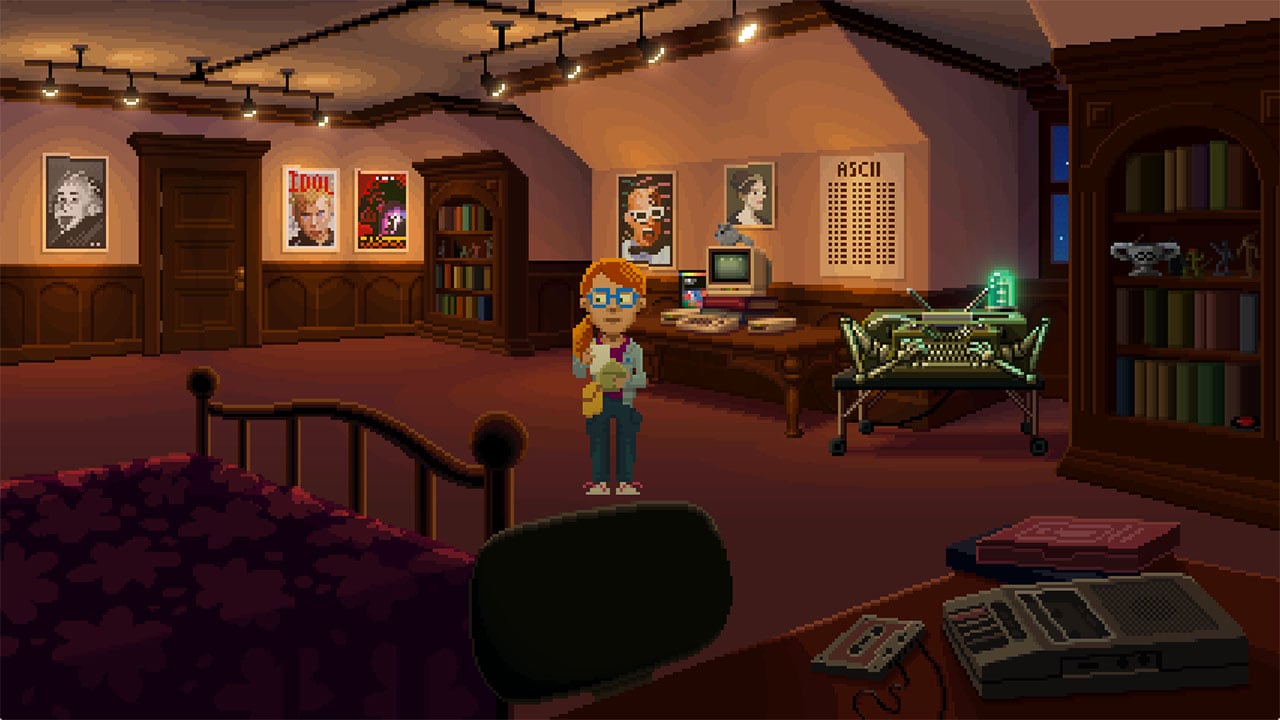 Elsewhere, people mock video games as ‘murder simulators’, and there are even comments on the title's own budget restrictions and development time. “It’s not part of the game!” a character shouts, after learning that their world has an end. There are even direct mentions of the game's Kickstarter campaign, going so far as to include the video pitch as a clue to a puzzle towards the very end.

Gilbert’s dialogue and humour even take on the culture of “downloading” games that has been rampant since the 90s, which they believe contributed to piracy of Maniac Mansion, and Monkey Island, and how it affects the lives of makers "It matters to the thousands of people who earn a living making games," Dolores preaches.

Beyond that, there are dozens of throwaway mentions scattered across Thimbleweed Park, be it Dolores’ dream studio – MmucasFlem, to get around Lucasfilm/ LucasArts copyright – or that dead bodies “pixelate” over time.

Maniac Mansion for the 21st century
Thanks to other experienced head creator in Winnick, Thimbleweed Park perfectly recreates the environment and feeling of a 90s-adventure game, replete with gorgeous pixel art that feeds on retro, neon, and noir to instil and set up its mystery-filled world. And owing to the technological advances since then, the developers can now create pixel art that was beyond anyone’s capability or reach. But it’s testament to their passion and understanding of design that Thimbleweed Park doesn’t feel out of place, and comes across as just the right type of amalgamation.

That knowledge extends to the part that matters most – the puzzles. Thimbleweed Park is split into over half a dozen story acts, that begin and end with something pivotal. But it’s not a walking simulator. Incidentally, to emphasise how little the dead body matters to the overall plot, the murder is solved halfway through. We’re steering clear of spoiler territory here, since the actual meat and potatoes involves figuring out the puzzles.

The game offers two difficulty options – casual, and hard. Depending on the one you decide to go with, the number of steps needed to solve something increase. Having spent time in both modes, we can attest that hard is a big step up from casual, which we felt becomes reasonably complex in itself as you go into later stages. If you’re looking to challenge yourself (aka become frustrated, bang your head on the wall, and then wait for the ‘Aha!’ moment), then hard might be right for you.

There is considerable depth to puzzles throughout the game, and you’ll need to pay attention to stray objects scattered on roads, what NPCs say, and ask them questions to get out information nibbles that will help you elsewhere. The presence of some rooms/ objects can end up confusing you, as they have no purpose for ‘casual’ players, and have been put there to allow ‘hard’ players to progress. There are entire mini-quests that you will never see when playing on casual.

The other gripe we had, as the game progressed, was that certain missions tended to become slightly repetitive, forcing you to perform the same action with multiple playable characters. You can’t give the same command to more than one character, which means you’re forced to look at the same animations over and over, for no use. It’s naturally frustrating, and an unnecessary waste of time.

Then there’s how Thimbleweed Park handles object generation. Some inventory items only appear after you’ve obtained something else, or had a conversation with someone. If you interact with such objects that contain a later solution while doing something else, the game behaves as if the object doesn’t exist. For example, a drawer with a fingerprint lab kit appears empty, if the timing isn’t right. To us, this felt like an illogical extension of the 90s-adventure-game world, locking away necessary items for no reason.

Overall though, the ex-LucasArts game veterans have created an appealing, and effective love letter to the movement they started back in the day. If you loved growing up with those titles, your decision has most likely already been made. For everyone else, Thimbleweed Park’s darkly humorous and self-referential approach, in combination with its oddball bunch of characters – everyone will have a different favourite – makes it an adventure well-worth pointing your cursor at.

Further reading: Thimbleweed Park, Ron Gilbert, Maniac Mansion
Akhil Arora Email Akhil
Akhil Arora covers entertainment for Gadgets 360, interviewing stars such as Christian Bale and Anurag Kashyap, covering series premieres, product and service launches across the globe, and looking at American blockbusters and Indian dramas from a global socio-political and feminist perspective. As a Rotten Tomatoes-certified film critic, Akhil has reviewed over 150 movies and TV shows in over half a decade at Gadgets 360. When he is not completely caught up with new film and TV releases, Akhil ...More
Samsung Galaxy S8 Aims to Dispel the Galaxy Note 7 Debacle