When it released in 2011, Skyrim or The Elder Scrolls V: Skyrim as it’s properly known, was the gold standard for open-world role-playing games. It had a wealth of quest lines, more than its share of factions, and so much to do that you could not get bored. Bethesda is yet to announce a new single-player game in The Elder Scrolls series, but it has brought back Skyrim by the way of a remaster. But we live in a post-Witcher 3 world now, where the expectations from role-playing games have undergone a drastic transformation. Does the Skyrim Special Edition hold up?

Skyrim Special Edition contains reworked arts and effects, volumetric god rays, dynamic depth of field and mod support - allowing users to place their own content in the game world. It also comes with three add-ons to the base game - the Dawnguard, Hearthfire, and Dragonborn DLCs. It also comes with all of the bugs of the original game for good measure.

Yes, some of the many issues from half a decade ago have found their way into this edition of the game. Characters literally merge into tables instead of sitting on chairs, and entire segments of dialogue sometimes freeze, making the lack of polish is obvious. This is after applying a 636.1MB day one patch which according to the notes brings “general optimisations” to the game. It could be forgivable for a new game, but you would think that after five years these problems would be addressed.

Unfortunately, the visuals of the game also show the same half-hearted approach. Outdoors, Skyrim Special Edition is stunning. Its snow-capped peaks and vast meadows are great to look at. Changes from day to night happen more smoothly than in other open-world games, and weather effects from rain to snow to sunlight all add to the immersion. However, when you find yourself indoors, particularly in the game’s many dungeons or caverns, it doesn’t exhibit the same level of visual fidelity. The difference between the two is so vast that you’d think you were playing two different games. 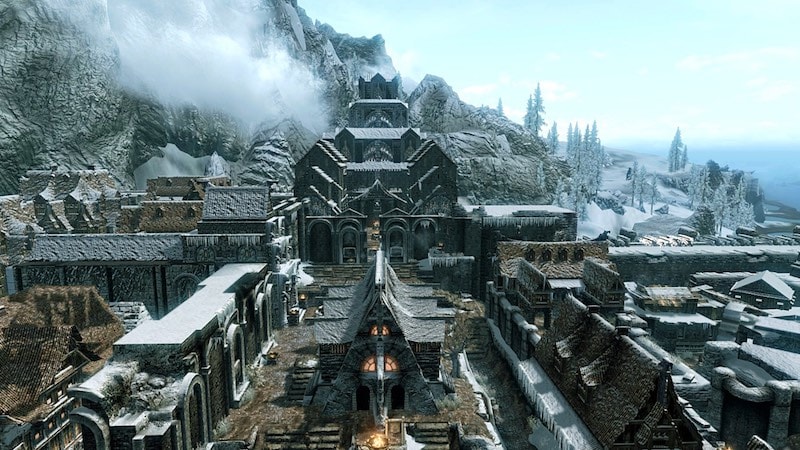 Another concern that is not as pressing is the frame rate. Although it remained stable for most part, there were one or two minor slowdowns during the game’s assassination animations. Coupled with this, the menus aren’t as responsive as they should be, and while Skyrim’s inventory management is easy enough to use, we were wondering what stopped Bethesda from allowing you to see what weapons and armour you equip your warrior with this time around.

And before you ask, yes, the game still doles loading screens liberally. Whether you’re entering a house, cave, palace, or a shop, regardless of the structure you find yourself entering or exiting from, you’ll be greeted by a loading screen. It’s tolerable in the likes of Fallout 4 - what with a newer version of the Creation Engine and such - but in a game that’s this old, you’d think there would be some advantages of better console hardware that could be utilised. 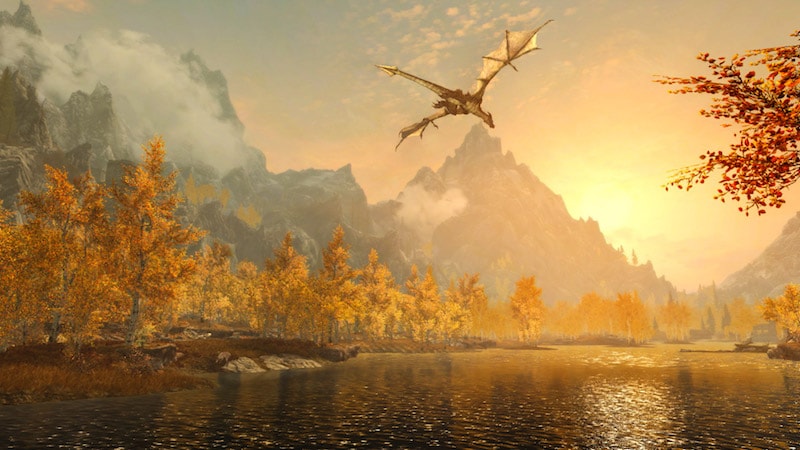 Once you get past all these niggles though, the adventuring is as fun as it gets. The scale and variety of quests on offer are still enjoyable. You can cause romantic discord between an elf-human couple, lay waste to a clan of vampires terrorising a village, or get drunk and find yourself transported to a temple on the other side of the world altogether. There’s a lot you can do in Skyrim Special Edition and not all of it is tied in to the main quest. You could be inspecting a house only to find yourself up against the lord of the underworld, find yourself greeted by one of Skyrim's many factions by committing a crime, or if you like, simply spend your time capturing butterflies.

As for the main quest, here’s the short and skinny: you’re a nameless prisoner who evades death thanks to the timely intervention of a dragon that lays waste to your oppressors, and anything else in its way. Soon you discover you can absorb the souls of these beasts and learn shouts - spells that let you move faster, or push foes off cliffs with your voice. Apart from this you have the usual complement of magic, stealth, and combat options at your disposal.

To sum it up, there’s no real reason to check it out all over again. It’s brimming with content but it’s not exactly new, and the remaster doesn't add any features to augment the experience in any way to justify its Rs. 3,499 price tag.

If you've not played Skyrim before, then you this remaster is a solid option. Everyone else should hold off until a price drop.

We played a retail copy of The Elder Scrolls V: Skyrim Special Edition on the PS4. The game will be available for the PS4 and Xbox One for Rs. 3,499 from October 28.

product Is the remaster of Skyrim as good as it should be? We tell you in our review of The Elder Scrolls V: Skyrim Special Edition. 3.5 out of 5 stars