The Croods for iOS app review

Share on Facebook Tweet Snapchat Share Reddit Email Comment
Rovio has just launched a new game for iOS and Android called The Croods, inspired from the upcoming DreamWorks movie by the same name. The game is based on the story of the world's first modern caveman family who support each other to survive in the wild and are trying to evolve to move beyond the Stone Age era with their revolutionary new tool called the Idea! We ventured into their wacky world on our iPhone and see what they're up to.

Say Hello to The Croods!
Like every family, The Croods are a close-knit group with Grug Crood, the overprotective dad and the Crood patriarch leading the family, who believes in "fear is good, change is bad" philosophy".Then there's Ugga Crood the mom, who adapts to the surroundings to keep the family secure in times of need. Eep Crood is their teenage rebel daughter, who plants the idea of a life existing beyond the cave.

Thunk Crood is a tall, meaty son who takes inspiration from his dad to be a hunter but can't kill for stones! Four-year old Sandy Crood is the youngest member of the Croods family but her innocence isn't to get you fooled. Living amongst the Croodaceous creatures, Sandy is prepared to bite back if the need be.

Gran the mother-in-law is a firm believer in natural selection and loves to boss around though she's as old as dirt. Guy the new guy is the brainy guy always making discoveries like fires, shoes et al that lets the Croods explore new possibilities. Belt the sloth is Guy's best friend and the world's first pet. Though he doesn't have much of a role to play in the game, his occasional appearances are a delight when you level up. He is most known for his signature sing-song expression, "Da da daaaaaa!"

Trap and Tame time!
Now that you're well acquainted with the characters, let's get you started with the game. Like we've mentioned earlier, The Croods is a strategy-based experience demanding your time and patience. But there's never a dull moment. The first time you open the app, Rovio will prompt you to register/sign in to track your game's progress online.

Once your through with the registration that doesn't take more than a couple of seconds, you jump right into a brief tutorial guiding you with basic gameplay. After some brief instructions, it gets pretty easy. The game offers you a certain set of coins and gems to begin your survival.

Grug does most of the work when it comes to trapping and taming animals in the pen. These creatures yield various resources to help you build your inventions and further level up to help you trap more Croodaceous creatures. Ugga takes care of the creatures' evolvement by offering them soup to give them a super-boost. The ingredients for the soup are berries, leaves and carrots in different quantities. 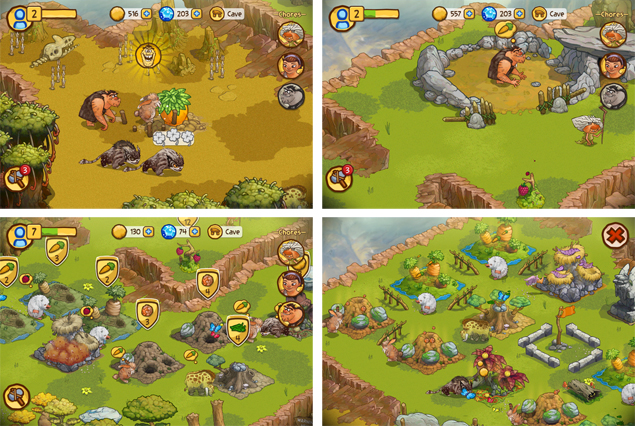 The Berry Bush constantly gives you berries at a rate of 1 berry per 10 seconds. Initially when the bush is in its nascent stage, it gives you 6 berries, but once you have enough resources to help the bush evolve, you get 12 berries and so on. These fruits are an extremely crucial nutrition to fuel various creatures like the Molarbear and the Bear Owl. The Albatroceros is fed leaves, which is an expensive resource in terms of yielding time and the Giralephant needs carrots.

Trapping initially, is easy. But as you progress, you'll end up goofing up quite a bit. It's not your fault, that's how the game's been programmed. You'll need to use an evolved version of the trap to capture bigger and more stranger creatures. The trapping territory is separate from where the family is nurturing the animals, thereby offering enough space for movement etc.

The Croodaceous creatures
The first creature you begin with is a Molarbear. "Give me berries and I shall give you carrots" is the creature's norm. You'll learn how to trap and tame this hybrid in the tutorial itself. Once all creatures are tamed, you'll be required to build homes for them using the accumulated resources. Just in case, you fall short, you'll need to release the creature, only to trap it another time when you're better prepared.

All creatures give you different resources. The Bear Owl offers coins, the Albatroceros gives feathers, the Bunny Beast gives stones while the Giralephant provides you with leaves. In all there are a total of 10 such creatures, each with it's unique characteristics.

As you learn to tame and provide shelter, you progress with other creatures. 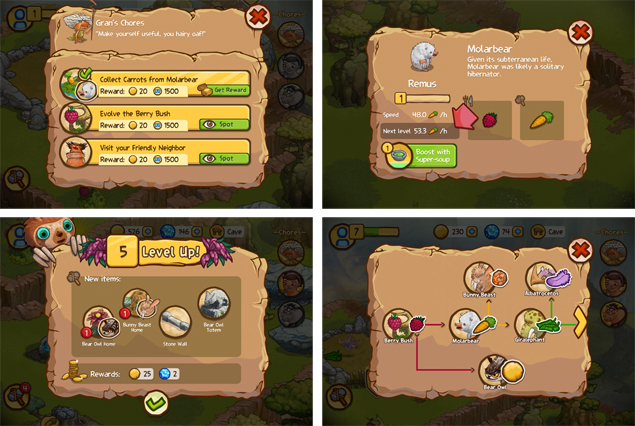 The resources are stored in the Cave. The Cave can also be evolved to offer more storage as you get ahead in the game. The initial one-storey evolves into multiple storeys as it evolves. You can track your progress with the cave chart that is located just beside the cave. It tells you, which animal yields what resource and you can see the carry-forward visuals to see how far you've come.

Apart from Homes and Traps, the build menu also lets you put up decorations to accessorise your surroundings with stone sculptures of various creatures, stone walls and fountains, wooden decorations and many such stone-age inspired stuff.

Gameplay and graphics
You start out with Ugga and Gran in the beginning with Grug only helping out in the chores. His inventions don't come into the picture until you've reached level 6. The first invention that you come across is the Elevator. The building process for this invention takes place in three sets of processes with each set demanding a combination of more resources than the previous one like stones, leaves, feathers, berries, carrots in large volumes. The Elevator is basically a sling shot to encroach upon and explore nearby areas for new creatures.

Gran is always assigning Chores, all performed by Grug, who is the hard worker amongst the family. Completing a set of three chores reveals a new set. You're awarded XP or experience points along with coins. Even creatures give you XP. You can see more Info for a creature by simply tapping on a particular animal and going into the Info section. It offers a short gist about the animal, it's level of evolvement and the rate at which it offers resources.

Other ways of collecting coins are doing self chorus such as clearing the area of trees and rocks. But in order to do that, you'll need to spend coins and even the rare gems. So you're most likely to avoid them and prioritise your resources for other purposes. Eventually, you will have to start removing the unnecessary elements to make more space for your animals. While the family territory remains static with elements being unmovable, you can move around the homes of the creatures and place them as per your convenience. 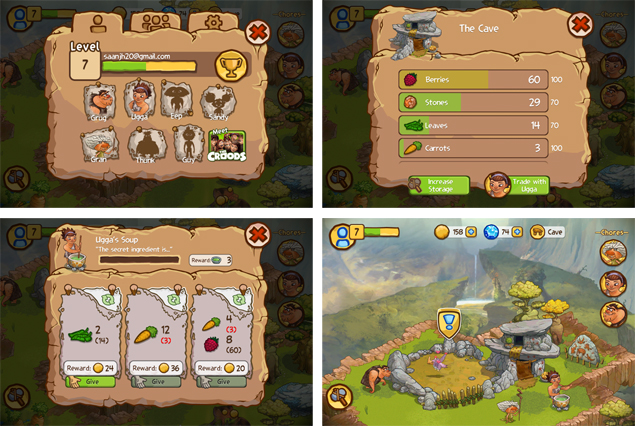 As you grow in the game, you'll acquaint other members of the Croods family including Eep, Sandy,Thunk and Guy and you can view achievements and challenges from friends with the Leaderboard. There's also a neighbour you can visit though, his role doesn't come until much later in the game and though we're not sure how he offers help. All he says is, "Hello neighbour! Grug's Hunt and Gather idea has caught on. Maybe we can help each other out later. Check back soon!"

The game is a visual treat on the iPhone with crisp and clear details of the game's environs. It's evident that a lot of attention has been paid to detailing each creature, it's movement and even various elements in the natural surroundings. For intense, the cave map that we mentioned earlier, is depicted on a stone structure with cave paintings of some of the creatures on the wall. The game stays true to the Stone-age era and instills the caveman essence beautifully.

The only disappointing thing about the game is that you don't get lot of opportunities to earn coins, which are a basic currency in the game. Sure, you're awarded with some on completing chores, but they don't seem enough and you'll find yourself struggling to earn some more. Some side missions would've helped. Earning gems is equally difficult. If you engage in a cleaning spree, getting rid of big trees and rocks awards you with only 2-3 gems max and again you'll need to shell out a couple 100 coins as well.

Also, finishing the chores uses up other resources, that are hard to refill over a period of time. The progression of the game is slow and requires a lot of patience. But once you master the strategy, you'll get comfortable.

The only creature that awards coins is the Grey Owl, but only at the rate of just 1 coin per minute. Evolving the Grey Owl requires 480 coins and 5 feathers and acquiring them is not an easy affair. Similarly, the Berry Bush requires 100 gems to evolve a third time. Evolution is necessary for all things so that they are able to churn out resources at a faster rate.

A fan of The Croods? We sure hope to be!
From the time we've spent with the game, despite being slow initially, the game is addictive. Farmville may have caught on like wild-fire by being the first strategy-based game to dominate the category, but The Croods offers a polished and refined experience with a refreshing look based on the movie.

Though we couldn't experience the role play of other members in the Croods family, besides Grug, Gran and Ugga, but we're pretty sure it'll be a lot more fun to see what all of them can do together. Overall, The Croods is a new experience from the traditional Angry Birds franchise from Rovio and other new projects like Bad Biggies, which were more physics-oriented and puzzle-based games. For those, who love a good, light-hearted strategy based game, The Croods will be a welcome addition to their iOS app world.

product We ventured into the wacky world of The Croods on our iPhone and saw what they're up to.
Comments