Telltale's Guardians of the Galaxy Review

Outside of the Lego series of video games, no developer other than Telltale Games has proven its format to be adaptable for seemingly everything in the world. Telltale’s first partnership with Marvel isn’t an episodic treatment of the Avengers, as unfortunate as that may be for some fans, but rather its band of morally dubious space heroes: Guardians of the Galaxy.

If you’ve played a Telltale title before, you know what to expect – an interactive adventure that runs for a few hours, driven mainly by conversations that allow you to pick from a dialogue tree, with your choices altering your experience across later episodes. Wedged between those scenes is a fair amount of action, entirely controlled by quick-time events that require you to hit a button, or a combo. There are also exploration segments, similar to Telltale's Batman, that involve figuring out clues in your environment. But it'd be a stretch to call them puzzles, given all you need to do is walk around and interact when you see a circle.

It’s straightforward, and owing to its success, Telltale has stuck with it for some time now. The first of five episodes – called ‘Tangled Up in Blue’, and written by Telltale veterans Zack Keller and Molly Maloney – opens with the Nova Corps asking for Star-Lord’s help. While you get to play as other characters during the fighting, you can only speak for the group’s human leader, Peter Quill, aka Star-Lord.

Right off the bat, you’ve to decide what matter most to you, be it money, the group, or own self-worth. And as you’d expect, the options you pick will shape the kind of Star-Lord you turn out to be. 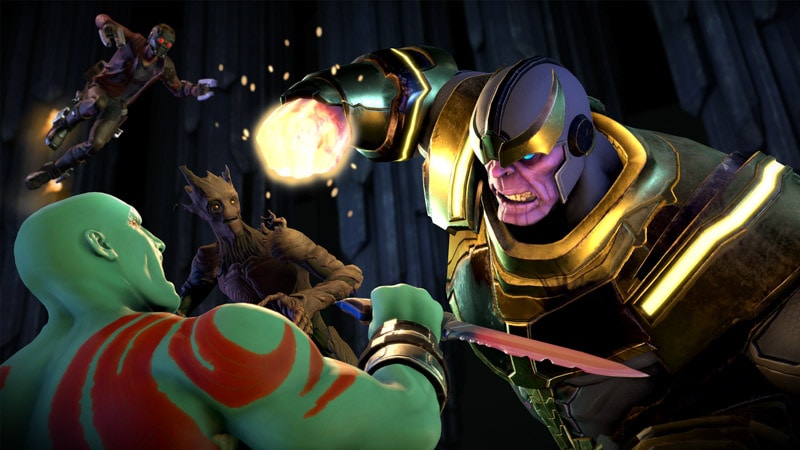 The group’s opening mission leads them straight to Thanos on an unidentified Kree planet. The game spends the first ten minutes getting you accustomed to the controls and mechanics, from looking around to find things to interact with, talking with your crew when they aren’t next to you, to using the Time Scanner to learn more about an environment’s past. Once you’re through all that, you get to meet the Mad Titan himself.

Thanos is a big part of the first episode, as Telltale emphasised in its marketing, but he makes a surprising early exit. The Guardians end up with the artefact called the Eternity Forge that can seemingly raise the dead, and can also embed its user in flashbacks that feel much more real than any dream. Soon though, the gang of misfits have a new antagonist hot on their heels, who’s determined to take everything away from them at all costs.

Telltale has said that the game is inspired by the comics, rather than the film series part of the Marvel Cinematic Universe, but it’s more a mix of the two. It doesn’t fit either continuity, though, and expects to stand on its own it seems.

Groot is his full-self again – Baby Groot fans will have to wait for Guardians of the Galaxy Vol. 2 – and some of its plotlines borrow directly from recent comics.

Then there’s the fact that Nebula is referred to as Gamora’s sister, which is a purely film creation, but Gamora herself is a lot different than Zoe Saldana’s version. Her looks are inspired from the comics, and Star-Lord looks nothing like Chris Pratt. None of that cast has been tapped to voice the actors either. 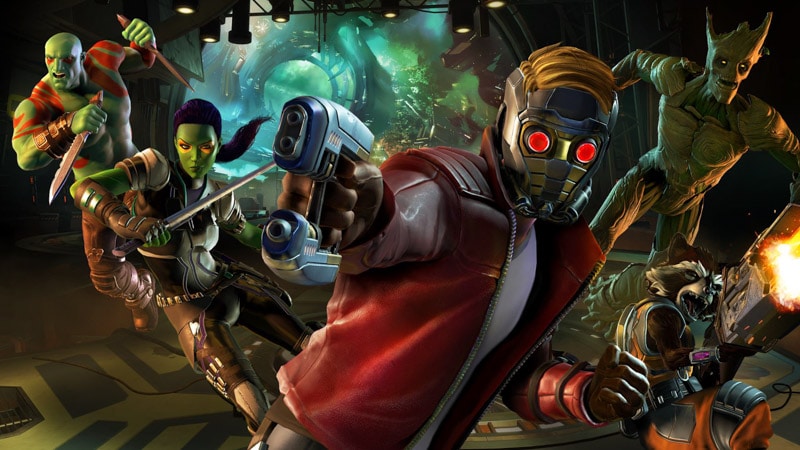 Instead, the game has its own original voice cast – Scott Porter as Star-Lord, Emily O'Brien as Gamora, Brandon Paul Eells as Drax, Nolan North as Rocket Raccoon, and Adam Harrington as Groot.

Of these, Rocket Racoon and Groot are closest to the movie portrayal. Eells’ Drax doesn’t have any of that awkward humour we’ve seen from the character in the film, while Star-Lord lacks the mischief that Pratt brought to the character.

Narratively, Telltale has crafted a tale that slowly draws you in, but it lacks that free-wheeling attitude, casual bravado and the quick-firing jabs that the 2014 film had.

It’s too sincere for the most part, and apart from Rocket and Groot to some extent, the rest of the bunch can feel bland. Thankfully, the action – with the flashbacks – does a good job of making sure the episode keeps chugging on nicely after a sluggish start. Despite being just over an hour of gameplay, it drags through the middle as it tries to set up the dynamic between the characters.

Unlike its movie counterpart, Telltale has kindled a bit of in-fighting within the five, and the descriptions of future episodes make it clear why. The game seems interested in testing the relationship between the Guardians, and as Star-Lord, forces you to make choices that will please a colleague, and displease another. Tensions are already on the rise early on, with the writers hinting at a diversion of paths, and it seems to building up towards a possible show-down. 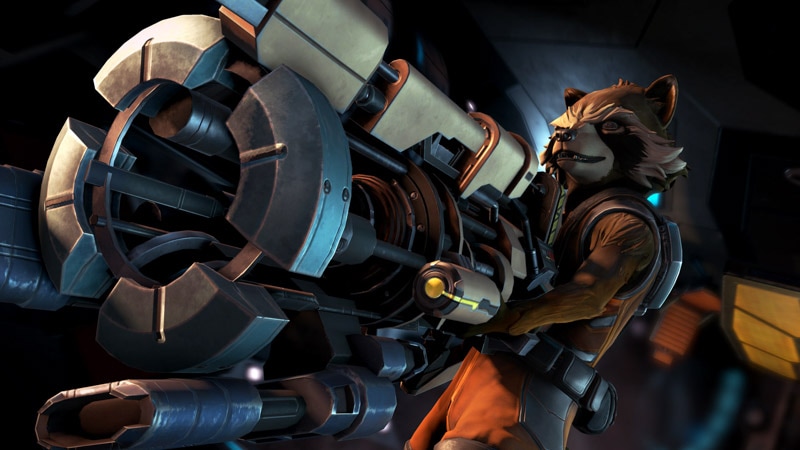 The first episode does retain the film’s cinematic flair in both appearance and framing. And with its music too, Telltale falls back on what director James Gunn has brought to his productions. It definitely makes for a better experience, with the likes of Electric Light Orchestra’s Livin’ Thing, Buzzcocks’ Why Can’t I Touch It?, and Hall & Oates’ You Make My Dreams continuing that 70s and 80s’ classic rock feel.

The opening salvo of Telltale’s Guardians of the Galaxy just isn’t fresh enough, but the biggest of fans will nonetheless likely enjoy the immersion into a new story arc. But Telltale doesn’t seem to be innovating any further than that.

Sure, there’s the Crowd Play feature, which first appeared in last year’s Batman, and gives a slice of multiplayer feel to the gameplay by letting people vote in with their phones, but it doesn’t extend your control beyond Star-Lord.

That might sound like a nice way to spend time on the family couch, but you’ll likely have more fun re-watching its big-screen inspiration. For what it’s worth, ‘Tangled Up in Blue’ does do a good job with its emotional beats, and it’s going to be interesting to see where it leads.

We played a retail copy of Marvel's Guardians of the Galaxy: The Telltale Series on the PC. The game is available via Microsoft Store and Steam for Windows 10, PlayStation 4, Xbox One, and iPhone/iPad.

Further reading: Telltale Games, Guardians of the Galaxy, Marvel, Marvel Comics
Akhil Arora Email Akhil Akhil identifies himself as a stickler for detail and accuracy, and strongly believes that robots will one day take over most human jobs. In his free time, you will find Akhil beating the computer at EA Sports FIFA or streaming new highly-rated TV series. More
Trump to Make Earth-to-Space Call Congratulating Record-Breaking NASA Astronaut