Take an adorable animated character, put him in a colourful environment, and get him to collect yellow coins while solving (mostly) side-scrolling levels that involve jumping on enemies. You're probably thinking of Mario, but he's not here. Inspired would be a strong word, as Super Lucky's Tale – a 3D platformer from Microsoft Studios, releasing Tuesday for the Xbox One X and Windows 10 – feels more like a weak imitation.

Positioned as a game for all ages, though definitely geared towards a younger audience given its low difficulty, it's one of the few "launch" titles for the Xbox One X, Microsoft's souped-up mid-generation 4K upgrade to its existing console, and a more powerful version of the PS4 Pro. But Super Lucky's Tale isn't meant to serve as a flagship advertisement of the One X's capability.

Its graphics are appealing and inviting, filled with characters that are variations on wild animals: foxes, cats, bees, and a bird that looks it was modelled after the Angry Birds protagonist. But they aren't even top-notch in terms of animation, as there's something off about the in-game lighting that makes everything feel plain, and tends to push Lucky's face into the uncanny valley.

Considering you rarely see the talking fox (that's Lucky) up close, it's not much of a bother. The bigger issue is that Super Lucky's Tale fails to be entertaining for long stretches, across its short 5-6 hour gameplay. The levels are a test of your reflexes, as befits a platformer, but lack any creativity. There's no ingenuity, unlike in games like Rayman Legends, which used its oddballs characters and musical cues to create some of the wildest platformer levels, akin to a roller coaster ride.

There are a total of four worlds in Super Lucky's Tale: Sky Castle, Veggie Village, Holiday Canon, and lastly, Spookington. But the amount of variety between those levels mostly exists in the environment around you, with the same moves and game mechanics – that were taught in the beginning – coming in use to get rid of your enemies. It only adds to the rote feeling brought on by the game.

The game's puzzles are further proof of a lack of creativity, with most being so simple that you find yourself completing them only to progress further – Lucky needs leaf clovers to unlock future levels – rather than for the joy of the 'Aha!' moment. Some of the later worlds don't even retain the puzzles, changing in into a game of reflexes, just as the main platformer levels.

Even if you don't enjoy them, you'll find yourself revisiting them due to Super Lucky's Tale's demand for a bare minimum of clovers to unlock boss fights (the final one needs 80 out of a possible 99). Each sub-level has a total of four clovers: one for collecting 300 yellow coins, a second for a hidden, underground level, a third for collecting the five letters in Lucky's name, and the fourth upon completing said sub-level.

Worse still, the game doesn't let you go back and retry a mini-game that will grant you the missing clover. Instead, you're forced to redo the whole level from scratch, even if you completed all other objectives in a prior run. It's a ridiculous way to pad out game length, with next to zero benefits. 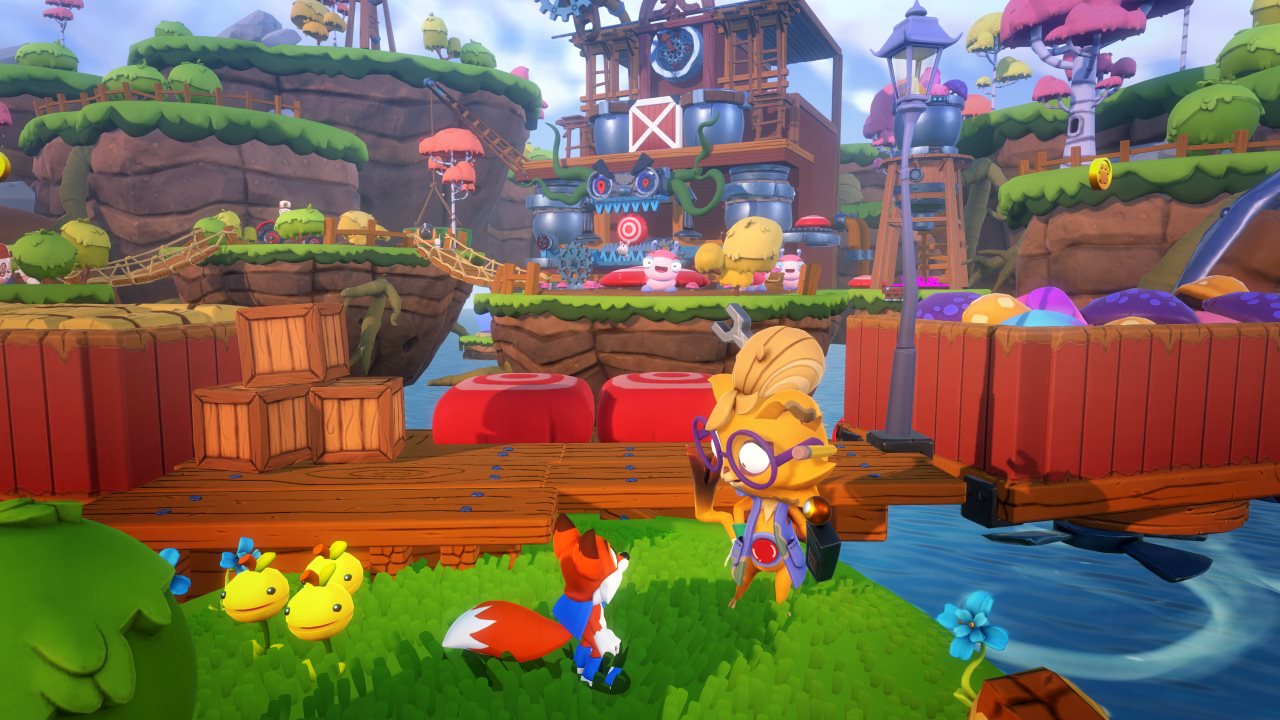 But that doesn't even cover the two biggest crimes of Super Lucky's Tale: a rigid camera, and imprecise controls. Despite being a 3D platformer, the camera only snap-rotates about 30 degrees in either direction, so you can't always see where you're supposed to be going. It's a stupid decision that restricts player sight, one that's a leading cause of death from missed jumps.

Controls are a mess. Lucky's jump and double-jump never give you the sense of whether you're going to make it or fail – thanks in part to the restricting camera – and that's not what you want from a platformer that punishes you at every turn. Maddeningly so, even the hub areas of Super Lucky's Tale – where you pick up collectibles without any enemies bothering you – allow you to fall to your death. Why in the world?

All of this contributes into making a game that was either rushed out, or was never given the development time it needed. There's nothing memorable about Super Lucky's Tale, be it the fairy-tale story about talking foxes taking on varying cats, or the platforming bits that make up most of its gameplay.

Were it pre-bundled with the new Xbox One X, it might serve as a weekend's worth of enjoyment for your children, given the camera and controls were fixed in a future patch. But as a title that costs Rs. 2,000, Super Lucky's Tale is definitely not super – and not a tale worth telling anyway.

Further reading: Super Luckys Tale, Microsoft Studios, Xbox One X, Windows 10, Xbox One
Akhil Arora Email Akhil
Akhil Arora covers entertainment for Gadgets 360, interviewing stars such as Christian Bale and Anurag Kashyap, covering series premieres, product and service launches across the globe, and looking at American blockbusters and Indian dramas from a global socio-political and feminist perspective. As a Rotten Tomatoes-certified film critic, Akhil has reviewed over 150 movies and TV shows in over half a decade at Gadgets 360. When he is not completely caught up with new film and TV releases, Akhil ...More
Google Pixel 2, Pixel 2 XL Get Saturated Colour Profile With November Android Security Update