Spider-Man for PS4 Is the Best Superhero Game Ever

Much like its protagonist, the PS4-exclusive Spider-Man wears its heart on its sleeve. There are obvious gameplay influences from other superhero games like the Batman Arkham series but thanks to a relatable hero, superlative movement, and great combat, it ends up being more than the sum of its parts. With the Spider-Man PS4 release date of September 7, here's what you need to know before the game is out.

Spider-Man is not an an origin story. Instead, it has Spider-Man aka Peter Parker managing his day job as a lab assistant and fighting crime as well as picking up the pieces of his personal life after breaking up with his girlfriend and star reporter Mary Jane. He's also picking up the pieces of life quite literally as he's been evicted from his apartment for skipping rent and had his belongings thrown out.

Couple that with his penchant for being exceptionally late for any commitment — professional or otherwise— and you have a superhero whose troubles feel very much relatable. More so when compared to the likes of other heroes in the Marvel pantheon such as billionaire genius Iron Man and super soldier Captain America. Even Batman's dark, antihero persona, while effective, does little to make us sympathise with his problems.

And while Spider-Man dealing with adult life makes for a compelling set up, it also ensures that you're in the role of the web-slinger in his prime. Developer Insomniac drives this point home with the very first mission of the game having you tasked with apprehending longtime Spider-Man villain and crime lord Kingpin complete with an entertaining boss fight. Instead of wasting time in low stakes situations, you're thrust right into the action.

Before you know it, the Spider-Man PS4 story quickly evolves into a sinister plot that has our hero combatting the who's who of Spider-Man villainy such as Mister Negative, Rhino, Electro, Vulture, and Scorpion to name a few, with the fate of New York City in your genetically-modified-by-a-radioactive-spider hands.

From the very outset, you're treated to a slick set of controls that make the combat enjoyable. On the surface, it might seem akin to the Batman Arkham series, having you string together a set of punches and kicks, but it's layered with unlockable skills that adds variety to the fisticuffs. These include automatically shooting webs to incapacitate your foe on dodging their attacks at the very last moment, throwing rockets back to their sender with your web shooters, or yanking guns from would be attackers. 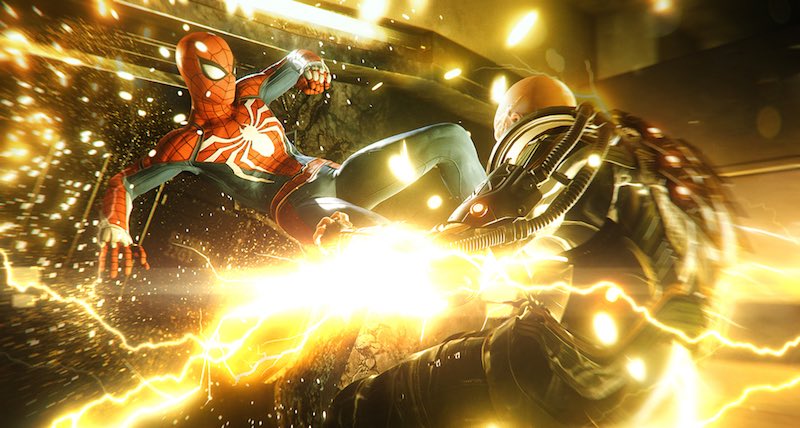 Combat in Spider-Man takes on a life of its own when your pitted against waves of enemies as it has almost ballet-like elegance to it. Sliding behind a shielded gangster to land a knock out blow doesn't get old and neither does juggling multiple enemies in the air as you pulverise them to bits. There's a welcome variety of combatants to square off against and the boss battles are equally challenging. All of this makes donning the role of the friendly, neighbourhood Spider-Man an absolute treat.

Outside of combat, you'll find yourself swinging across the many tall buildings of New York City. With the tap of a button you'll traipse between skyscrapers, parks, and terraces. It builds on Insomniac's Xbox One exclusive, Sunset Overdrive, that rewarded players for avoiding walking on the ground in favour of dashing across buildings and rails. The sense of momentum you achieve by stringing together leaps between buildings is perhaps the best, most responsive sense of control we've felt in a game of this generation. So much so that in our time with Spider-Man, we avoided the option to fast travel — which lets you go directly to an area of interest— just because movement feels incredible. While the combat intrigued us with its depth, Spider-Man's traversal kept us hooked.

In fact, the traversal in Spider-Man is good enough for us to bother with its many collectibles. Throughout your journey, you'll notice that New York is peppered with research labs to activate, areas full of enemies to clear, challenges to pursue, and backpacks to collect. Doing these nets you tokens that you can use to get suits such as the armoured Mk III variant that grants you brief periods of invincibility or the Spider-Man 2099 suit that lets you lower gravity when in the air. Certain suits — such as the Spider-Man Dark Suit are available on completion of side-quests — of which the game has plenty. There's enough in way of a narrative pay-off as well, with cameos from the likes of the Black Cat and Harry Osborn to name a few. 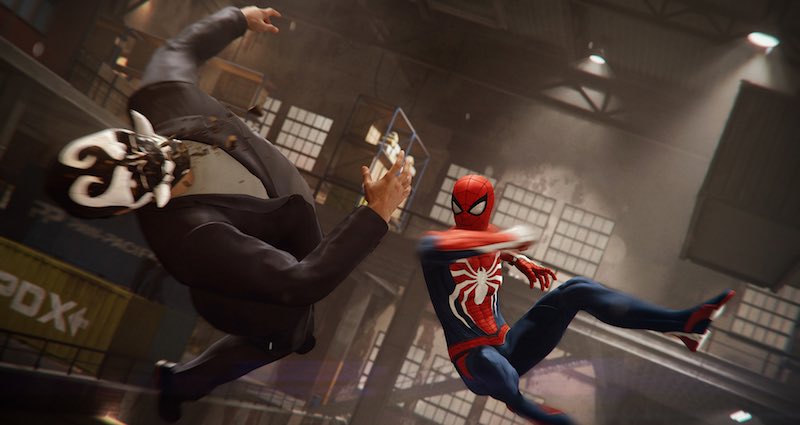 Speaking of cameos, Spider-Man for PS4 puts you in the role of Mary Jane on occasion. As a journalist, she partners with Spider-Man in his search to unmask the conspiracy that threatens New York. These are in the form of stealth missions in locations such as museums and compounds. With five of them spread across the game's three acts, you'll hide between cover as you make your way towards a piece of evidence unseen that helps take the story forward. Some might find these to be an annoyance as the moment you're seen it's game over, but there are ample tools at your disposal that make them simple to negotiate such as being able to distract or incapacitate an enemy. To us, these sections were a welcome change of pace from the breakneck series of events experienced as Spider-Man.

Along with this are the game's quieter moments. These have you as Peter Parker solving lab equations or helping out at a homeless shelter, adding a dimension of the mundane to a game that's essentially about an evicted, down on his luck scientist in a costume trying to save a city from forces beyond his comprehension. Considering that the gold standard of superhero games — the Batman Arkham series — only brings up Bruce Wayne's identity in the context of Batman's origins, Spider-Man feels as much about the superhero as it is about the person behind the mask, and it just comes across as genuine in comparison.

Clocking in at around 30 hours to complete Spider-Man's main storyline, and more if you decide to go after everything else the game has to offer, Spider-Man for PS4 isn't just triumph for video games. It's quite possibly the definitive interpretation of the superhero in any medium.

product Should you buy Spider-Man on PS4? Find out in our Spider-Man PS4 review. 5 out of 5 stars

Spider-Man for PS4 Is the Best Superhero Game Ever
Comment