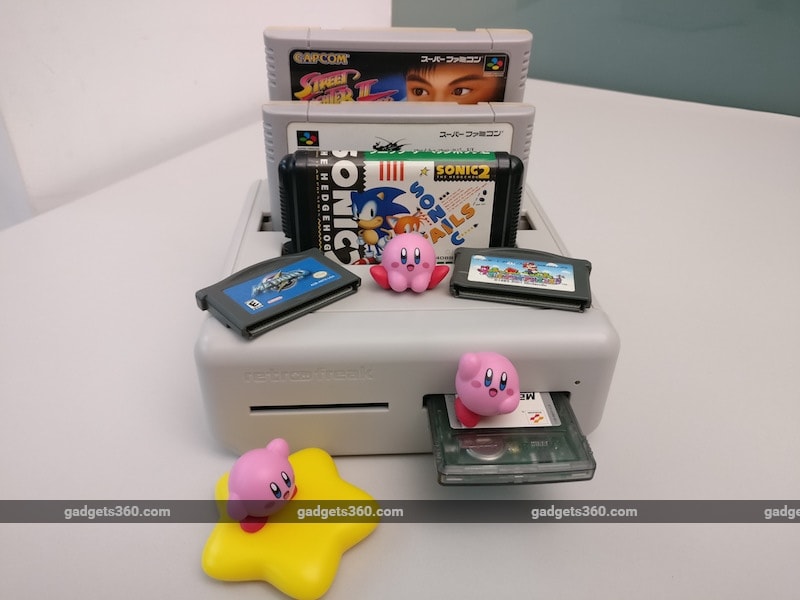 Recently, both Nintendo and Sega have launched classic consoles, the NES Classic Edition and the Sega Mega Drive respectively. Unfortunately, it feels as if both companies are resting on the laurels of the past, and have barely added enough modern day functionality to justify the new gadgets.

If you love retro gaming, your options boil down to buying a third-hand console or downloading ROMs to run on your PC or smartphone. But there's one ray of hope - Cyber Gadget, a little-known Japanese company that has launched a console called the Retro Freak. It might not have the heritage or legitimacy of Nintendo or Sega, but it manages to do a better job than both of them in making the rose memories of simpler times come alive, at least in theory.

The Retro Freak lets you use game cartridges from the Famicom, Super Famicom (known as the SNES ), Sega Genesis (or Mega Drive depending on where you live), TurboGrafx/PC Engine, Game Boy, Game Boy Advance, Game Boy Color, and Supergrafx. Along with support for these classic consoles, there’s an HDMI output that lets you upscale your games to 720p.

Getting to play all these old games is a start, but the real draw is that you can copy all of these games from their cartridges onto an SD card using the Retro Freak, ensuring you have a backup should the cartridge eventually give up due to wear and tear. Of course this backup can then be used to sideload these games onto other devices to run in emulators. This also allows updates to the device’s firmware, patching in fan translations, or simply swapping save files. All of these features make the Retro Freak an exceedingly tempting proposition.

Metroid Fusion for the GBA upscaled on the Retro Freak, looks rather decent on a big screen.

At first glance, the Retro Freak reminded us of a SNES - it’s grey, boxy, and petite, with a plastic yet durable feel to it that dispels any thought of cheapness. The materials used in its construction aren’t premium when compared to what Microsoft, Sony, or even Nintendo bring to the table, but the Retro Freak manages to exude a sense of sturdiness nonetheless. However, its dull colour makes sure it wouldn’t be at home as part of your state-of-the-art entertainment centre.

On the inside there’s a Rockchip 3066 SOC and it’s running an Android-based OS. As for performance, the Retro Freak played every game we threw at it - be it classics like Final Fantasy VI for the SNES or relatively newer fare such as Metroid Fusion for the Game Boy Advance, there wasn’t a single game that did not work. The games play exactly the same as ever, but they are a tad crisper and smoother thanks to an effective up-scaler. Sprites appeared sharp, and games with detailed backgrounds such as Donkey Kong Country looked just a bit more engrossing while the action never skipped a beat. It’s a better effort than Nintendo’s emulation attempts with the Virtual Console on the Wii and Wii U. The Retro Freak also lets you save games instantly without having to memorise passwords or hunt for a save point.

The controllers it shipped with are just as effective. You’d think they belong on a SNES and you wouldn’t be wrong. Be it the buttons or the d-pad, everything feels remarkably responsive as you’d expect it to be. From rapid-fire movements in Street Fighter 2 to finger-busting fatalities in Mortal Kombat, the Retro Freak’s controllers performed admirably. They won’t win any awards for their looks but they serve their purpose exceedingly well. The Retro Freak supports modern-day controllers like Sony's Dual Shock 4, but with the included controllers working well enough, we never did feel the need to switch them out for any other reason other than to confirm that the feature works as advertised. The only thing is that you will need wires to do so, as wireless compatibility is non-existent on the Retro Freak.

Copying our cartridges to an SD card was equally painless, what with the device’s interface prompting us when they were slotted in. Which brings us to one of the Retro Freak’s biggest annoyances - its SNES cartridge slot.

While plugging in a Sega Mega Drive or GameBoy Color cartridge into their respective slots worked as it should (though keep in mind, you can’t plug in more than one game on the Retro Freak at a time), the SNES cartridge slot felt flimsy. Ever so often we were met with an error stating the game we inserted was unrecognisable, or it ejected while in use, putting a damper on the entire experience. This forced us to try a variety of methods to get fully functional original cartridges to work such as exerting as much or as little force while plugging them in, or resorting to the age-old placebo of blowing the cartridge. After some trial and error, we managed to rectify this issue for most part with the aforementioned tricks, though we can’t help but feel that entire struggle is needless and should have been avoided.

(Also see: Five Emulators for Playing Mario and Other Classic Games on Your Android Phone)

The rest of the experience was solid. Powering it up treats you to an interface that is competent enough to allow you to tweak settings such as visual filters, image quality, and scan lines, or simply add cheats. Delving through the SD card or the device’s internal 4GB storage was utilitarian - with a simple text menu to navigate through games, save files, and screenshots. Yes, much like the PS4 and Xbox One, the Retro Freak lets you take screenshots in-game. You can’t share them instantaneously though. Instead you’ll have to transfer them via SD card to a PC to upload to your social network of choice manually.

Super Mario 3 on the SNES is equally crisp decades down the line.

Aside from the minor grievances, the Retro Freak is well worth considering if you have an interest in playing old games as close as they were meant to be played. It’s not available officially in India yet, so you’ll be looking at a cost upwards of Rs. 12,000 if you’re importing it or buying it via the grey market. In our opinion, that’s not too bad considering the length and breadth of games across systems for you to play and the other features it possesses, which make it a better option than either Nintendo or Sega’s offerings, albeit at a higher price. Sure there are cheaper ways to get your old school fix, but if you’re looking at a convenient compromise that brings a gamut of choice, look no further.

Meizu MX6 Gets a New Variant Sporting 3GB of RAM