Resident Evil 2 isn't just the title of the original PS1 game that released in 1998. It's also what Capcom calls the 2019 reimagining of the classic. After an all too short Resident Evil 2 demo that released nearly two weeks ago, we've finally been able to play the full game on PS4 Pro and Xbox One X. Is there more to Resident Evil 2 than its masterful demo? Or is it a missed opportunity at utilising Capcom's stellar RE Engine tech for something new? Here's what you need to know.

Much like the PS1 original, Resident Evil 2 for PS4, Xbox One, and Windows PC has you playing separate campaigns as protagonists Leon Kennedy and Claire Redfield, who are trying to escape Raccoon City that's in the throes of a zombie apocalypse.

Leon is a rookie cop on the way to his first day at work at the Raccoon City Police Station while Claire is a university student searching for her brother and hero of the first Resident Evil game, Chris Redfield, who also works at Raccoon Police Station. Before you ask, no, you don't need to play the original Resident Evil before checking out Resident Evil 2, but it does help add context to the plot.

Without spoiling much, the story of Resident Evil 2 takes some creative liberties with its source material, but nothing that detracts from the experience too much for veterans of the original. What starts off as a simple objective to escape Raccoon City soon snowballs into a conspiracy involving human experiments, secret agents, and sinister corporations.

Nonetheless, Resident Evil 2 looks fantastic. Regardless of your console of choice, you're treated to some gorgeous graphics. Be it highly detailed zombies and gigantic undead monsters or minor elements that other games tend to overlook like inscriptions on police uniforms or simply digits on a lock, Resident Evil 2 looks consistently good. Characters animate realistically too, limping when injured and making subtle eye movements while talking. The level of polish is almost at par with the likes of God of War, Spider-Man, and Forza Horizon 4. Yes, it looks that good.

And it's this superlative first impression that makes some of the rare glitches like certain pillars in the environment shimmer more than they should and the odd enemy clipping through doors stand out like sore thumbs. Perhaps a day one patch will rectify these concerns, though this aside, there's little else out of place.

In addition to this, the gameplay is also up to the task. Be it moving around its cramped, zombie-filled hallways or pulling off a headshot on an encroaching monster, Resident Evil 2's moment to moment gameplay feels good enough to sustain its campaigns that total around 20 hours. There's a welcome mix of exploration and puzzles with an adequate number of undead that need a bullet between the eyes to liven up the proceedings.

Most encounters against Resident Evil 2's varied enemies are tense affairs. These include the long-tongued, ceiling-hugging licker, exceptionally agile zombie dogs, and the Tyrant — a hulking, nearly un-killable lab-created monstrosity that stalks you for most of the game.

Managing your resources plays a major part in survival. Early on, there are rarely any one-shot kills and bullets tend to be scarce. Leon's pistol and Claire's revolver do minimal damage, making it crucial that you have a steady aim to nail those headshots.

This is compounded by your limited inventory. There are a finite number items you can carry, four to begin with. Gear like hip pouches let you expand your inventory if you can find them.

More importantly, unlike other modern games, key items like medallions or pliers that you'll need to unlock new areas share the same inventory space as your guns, ammo, and first-aid sprays. This makes inventory management a necessity, a hold over from past Resident Evil games.

Although you can store items away for later use, deciding what to bring adds a level of strategy to the proceedings. Do you carry all your ammunition, guns, and knives with you or do you leave room for a key you might discover on your journey?

The scarce inventory space also means you'll have to decide when to fight and when to run as there's only so many weapons you can carry with you. Thanks to a modern control scheme that lets you run and turn at the same time, evading enemies is easier than it was in the original game.

Though you won't be able to outrun every foe. The Tyrant will chase you down, stalking your every move. This makes it wise to conserve your most powerful guns for these fights. Meanwhile, lickers would wait right outside the room you're hiding in for a spell before going their own way. 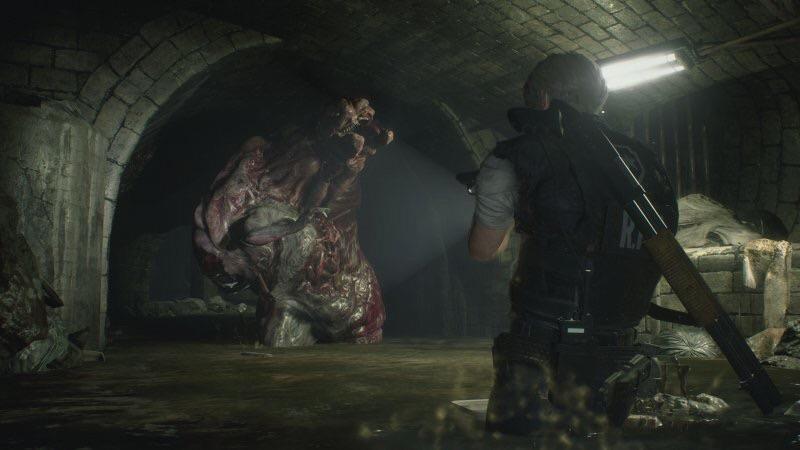 All this makes escaping Resident Evil 2's monsters require a little more thought than just ducking into the first deserted area you see. Rather, you'll need to expertly navigate its narrow passageways to fool them, hopefully long enough for you to give them the slip.

As for the game's puzzles, they come in a host of flavours. These include cracking safe codes that essentially amounts to pressing the d-pad left or right for a certain number of times, lock codes which are three letters needed to open some desks or closets, and even medallion puzzles that need you to input a set of symbols in specific order. Solving these requires you to pay attention to your surroundings and collecting items from other survivors. They're never too tough or simple. In fact they're balanced well enough to make progression through the game feel satisfying.

At times, solutions are scribbled on the wall, or in documents you chance upon while rifling through the game's many drawers, or by simply developing a roll of film in a dark room, making exploration important. Solving a puzzle usually grants one of the aforementioned key items to help you progress like a battery to use in a detonator to blow off a C4-laden wall blocking your path.

It's this combination of exploration, puzzle solving, and action that makes Resident Evil 2 a treat to play. All of these distinct gameplay elements come together in a natural, organic fashion that works well.

That said, it isn't for everyone. For one, there's a gratuitous amount of gore and blood which some may find off-putting. Make no mistake, this game earns its 18+ rating. And a few may find that for them, the true horror lies in juggling Claire's and Leon's limited inventory.

However, to us, the stellar production values and slick gameplay make for a fantastic experience that's robust enough to outweigh its potential flaws. Resident Evil 2 is an entertaining romp through Raccoon City that no horror fan — old or new — should miss.