Ever since the original PlayStation debuted in 1994, Sony has always released a smaller iteration of each generation of consoles. While shrinking down components has become par for the course, when the PS4 released in November 2013, we wondered how could Sony even release a more compact version of an already stunning piece of gaming hardware. It didn’t seem possible.

And then the PS4 Slim happened.

The pictures don't really do it justice - as we learned about the new console through a flurry of leaks, it looked more or less the same size as the original PS4. The reality though is completely different.

These reduced proportions should make it perfect for crammed entertainment centres or desks. After a couple of weeks with the PS4 Slim we can attest that it lives up to the community-given 'Slim' suffix (Sony simply calls it the PS4). It’s small enough to comfortably fit into a messenger bag that’s usually reserved for a 13-inch MacBook Air with ease, as well as occupying a cozy nook in your entertainment set up.

Plus, it’s ridiculously light compared to the original PS4. Sony claims it's lighter by 30 percent, but combined with its low profile, it’s surprisingly mobile for a console designed for gaming at home. Simply put, you won’t have a problem carrying it with you on the go, if you are into that sort of a thing.

Historically, Sony is notorious for cheaping out on its slimmer variants, as any PS Vita 2000 or PS3 Super Slim owner would attest. With the PS4 Slim, this does not seem to be the case.

The all-matte finish is a welcome upgrade from the glossy-and-matte of the original PS4, and the rounded corners are a pragmatic fit for many a living room, as compared to the sharp edges of its predecessor.

Where the PS4 Slim truly shines over the original PS4 or even the PS4 Pro is in its buttons and lighting. Rather than the feather-light touch power and eject buttons of the first PS4, or the slightly obtuse labelling and positioning of these buttons on the PS4 Pro, the PS 4 Slim gets it right.

On the PS4 Slim the buttons are mechanical and rounded. There’s a subtle yet assuring sense of feedback that lets you know when you’ve turned it on or off. Coupled with this is a dotted light indicator that gives you clearer visual feedback of whether the PS4 is on, off, or in Rest Mode. This replaces the vertical light strip of its predecessor, making gaming in the dark a lot more tolerable.

Apart from this, there’s little amiss. Both the PS4 and PS4 Slim sport a near identical feature set. There’s the same Blu-ray drive, as well as 500GB and 1TB storage options. You’ll get the same two front-facing USB ports, an HDMI for video, an Aux port for the PS4 camera, and an Ethernet port. The key difference (apart from the size) is that the PS4 Slim lacks an optical audio-out port. In its place though, the PS4 Slim has a better Wi-Fi chip, which supports the 5GHz band for a more reliable connection (if your router has support).

Nonetheless, there are some minor annoyances. The svelteness results in a rather noisy console that rivals its predecessor particularly when installing a game via Blu-ray. Though it’s almost always cooler, it's most definitely not quieter.

This isn’t all. Although it’s extremely easy to pop in a newer hard drive by simply sliding off a panel on the side, it's a lot more fragile than it should be. Sony’s plastic trimmings work well for the console overall, but the PS4 Slim hard drive panel feels weak and could be prone to snapping.

PS4 Pro vs PS4: What's New, Different, and Everything Else You Need to Know 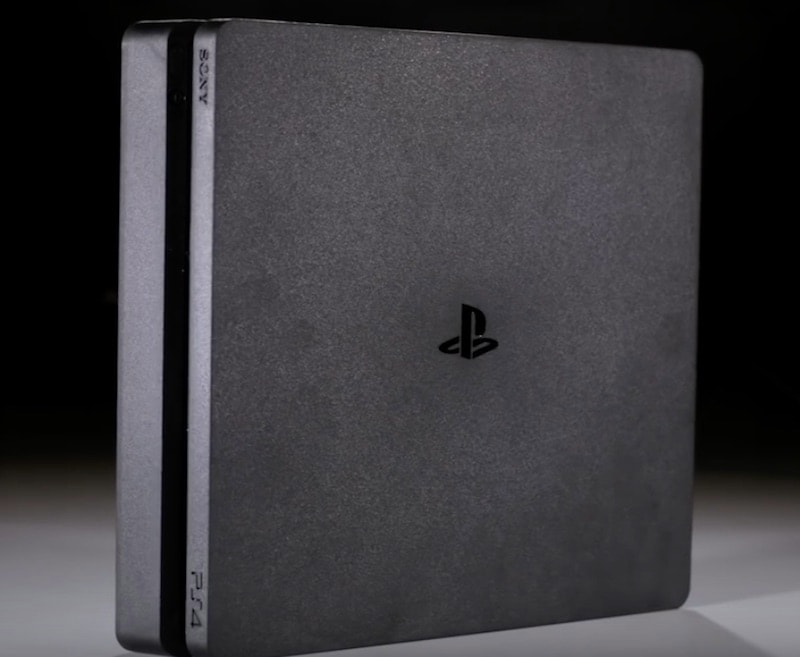 These aside, the PS4 Slim is a slick piece of kit and well worth the price of admission, especially in India. Markets like the US and Europe maintain a $100 (around Rs. 6,700) difference between the PS4 Slim and PS4 Pro. In India, the difference is Rs. 11,000, with the cheapest PS4 Slim cost Rs. 27,990 and the PS4 Pro costing Rs. 38,990. That difference is a lot more if you’re willing to forsake warranty. Several consumers have reported being able to purchase the PS4 Slim 500GB for as low as Rs. 19,700 at grey market outlets in Delhi and Mumbai. For what it’s worth, the PS4 Pro is around Rs. 35,000 minus warranty. With a big difference like that, you’re better off buying the PS4 Slim and putting the money towards more games or a bigger hard drive, especially if you don’t have a 4K TV.

If you already own an older PS4, there's no point in spending the money on a PS4 Slim - unless you really want two consoles for reasons best known to you. But if you're looking to join the PlayStation Nation, then the Slim has a lot going for it, and you can use the extra money to get three or even four games along with the console.

To sum it up, the PS4 Slim is a worthy refresh on the PS4. It’s deceptively compact and has a few worthwhile ergonomic additions. A perfect entry point to anyone looking to buy a gaming console right now.

product The PS4 has got a makeover. But is slimmer better? Find out in our PS4 Slim review. 4.5 out of 5 stars