Konami's focus on mobile gaming, in addition to its other interests such as pachinko machines and casinos in Japan, seems to have hurt the console ambitions of every franchise it owns in recent years. Back in April, its football sim Pro Evolution Soccer was dealt another blow, after Konami opted not to renew its deal with UEFA, a partnership that had been around since 2008. Naturally, its big-moneyed rival EA Sports took advantage of the opportunity, adding the Champions League to its crown of jewels in the upcoming FIFA 19, out later in September.

The UEFA licenses were one of the few things Konami’s PES could boast of in a gaming market that places a high value on playing with official kits in official stadiums under official branding. And in its hour of need, PES 2019 – the latest iteration now out on PC, PS4 and Xbox One; previous-gen consoles PS3 and Xbox 360 have been left behind for the first time in over a decade – doubled down on the charm offensive of lesser-known leagues. Thanks to that, there are seven new licensed leagues in PES 2019 from Belgium, Russia, Scotland, and Turkey, among others.

At the same time, the biggest leagues remain nearly devoid of licenses, except for Arsenal and Liverpool in the English League, and Barcelona in the Spanish League. The Italian League is better off as always, with all 20 clubs except Juventus available in PES 2019. Germany's Bundesliga continues to be missing though France's Ligue 1 is fully licensed. Of course, enterprising players can always "fix" matters by making use of the game's convenient import function, what with PES' dedicated and always-helpful community having already released unofficial kits and name changes.

The addition of several new leagues is beneficial to every game mode: it increases the player roster available in Master League, the manager mode, and myClub, the PES version of FIFA's Ultimate Team (colloquially known as FUT for short), while boosting the club choices for Become A Legend, the player career mode, and all casual kick-off modes be it offline or online. Konami will hope that the additions can bring in football fans from beyond the big European countries looking to play with their local teams. 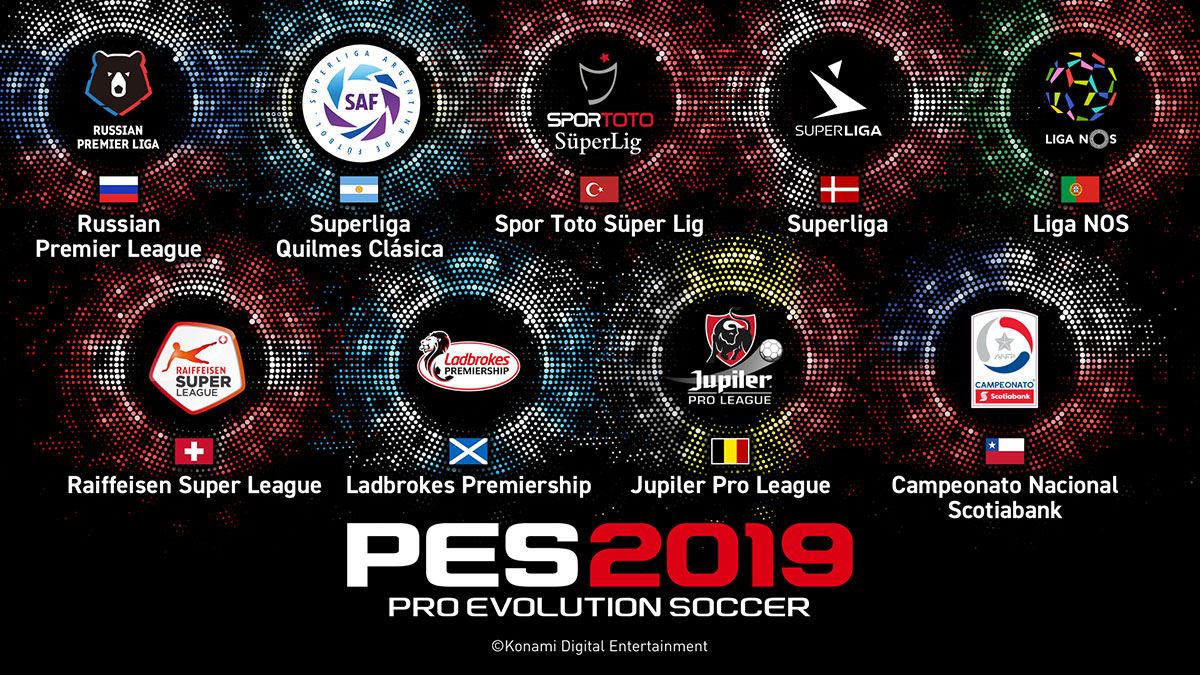 Of course, over the long run, it's the action on the pitch that matters more. Having chosen to mould itself around jogo bonito – football’s nickname popularised by the legendary Pelé – for the past few years, PES 2019 finds the franchise at a curious stage, seemingly trying to infuse a sense of realism into its penchant for style. It’s the only way to explain the duality of the gameplay this year, where the frequency of first-touch football and ease of give-and-go is in contrast with scoring from long shots and no-look passing, the last of those likely a result of the new player traits.

The pace of play, the size of the pitch, and simple defence controls all contribute towards first-touch football being more routine in PES 2019 than it is in real life, and most of it tends to be quite good, even with the teams not high on the pecking order. And it’s much too easy to construct one-two passes in Konami’s latest, with AI defenders not tracking opposition runs very well. For what it’s worth, the difference in player speed with and without the ball is managed well, so you can catch up at times if you’re alert enough.

In the interest of making scores more realistic – PES was synonymous with goal-fests in prior years – Konami has introduced a few welcome changes. One of the big ones is an adjustment of the utopian delivery of crosses and a tweaking of the accuracy of headers, making it tougher to score off aerial balls whipped from wide areas. Long shots are a lot more realistic than in EA’s FIFA 18, thanks to built-in inaccuracies in shooting and more equipped goalkeepers, though weirdly enough, keepers aren’t that great when it comes to shots from narrow angles.

Fouls is another aspect where PES 2019 is more realistic than FIFA, with Konami’s AI liable to be aggressive and make mistakes, more so in derby matches, just as human players tend to be. PES 2019 also dials up the realism for no-look passes and through balls, with stats playing a big role. If the player in control doesn’t have a high passing value or the new player trait, chances are he will overshoot it and punt the ball off the pitch. Unfortunately, defending continues to be the hill to die on for Konami; in addition to not tracking forward runs, ball retrieval mechanics feel outdated, and it’s high time PES reconsidered its homing-missile approach in favourable of a more realistic model. 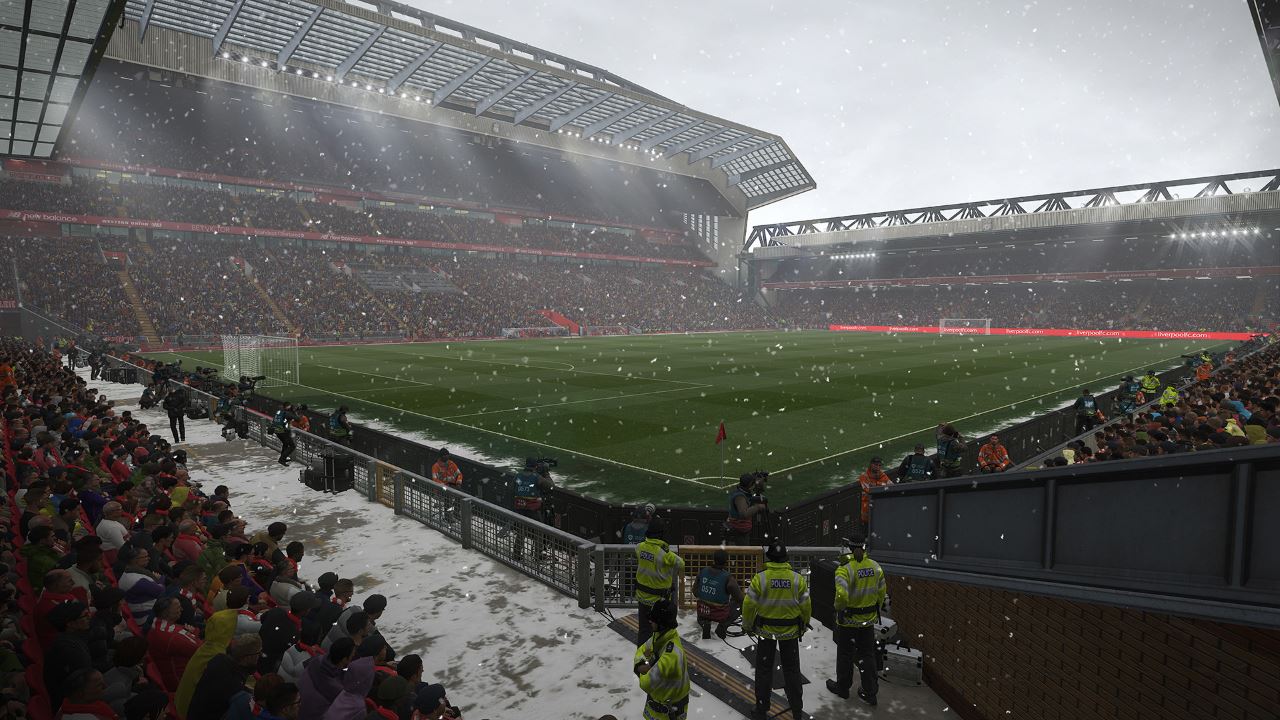 Konami’s Fox Engine is also showing its age when it comes to visuals, though the over-sharpening troubles we had with the demo weren’t a factor in the full release. PES 2019 introduces snow weather to the available options where it’s geographically appropriate, but outside of some additional slipping, there’s no accumulation of snow on the pitch as with FIFA. And though it’s only a matter of decoration, Konami could do well to put more effort into the overall presentation – hell, the PES community works harder than the developers in that regard.

Off the pitch, PES 2019 is touting several improvements to both myClub and Master League. For the former, they include the introduction of “featured players” – the equivalent of FUT’s Team of the Week – in addition to tweaks to player purchase and trade, skill and position trainers, and an overall ranking system among other things. Our big gripe with myClub – and this applies to FUT as well – continues to be how it shifts attention and time from on-pitch action towards off-field matters. Dividing our time between myClub and Master League, it was clear that we could play more matches in the latter.

Over in Master League (and Become A Legend), Konami has licensed the little-known pre-season tournament International Champions Cup and made it to available to every team regardless of their level of prestige. The more important changes though are to transfer negotiations and player development, with Konami claiming the latter is more realistic. While we will need more than a week to assess that, we can decidedly say that the former isn’t realistic even if the options at hand have improved – you can define re-sell percentage and your assistants make it clear if you should haggle more or not.

As Man Red, we picked up Liverpool’s Egyptian forward Mohamed Salah – a rival club’s best player, if the reference is lost – on deadline day and later in the year, successfully exchanged 28-year-old defender Chris Smalling for Barça’s 24-year-old defender Samuel Umtiti for a paltry additional $12 million. And if that wasn’t ridiculous enough, two different clubs paid $36 million apiece for 33-year-old right back Ashley Young and 31-year-old keeper Sergio Romero; the latter is second choice at the club and plays only a handful of matches in a year. 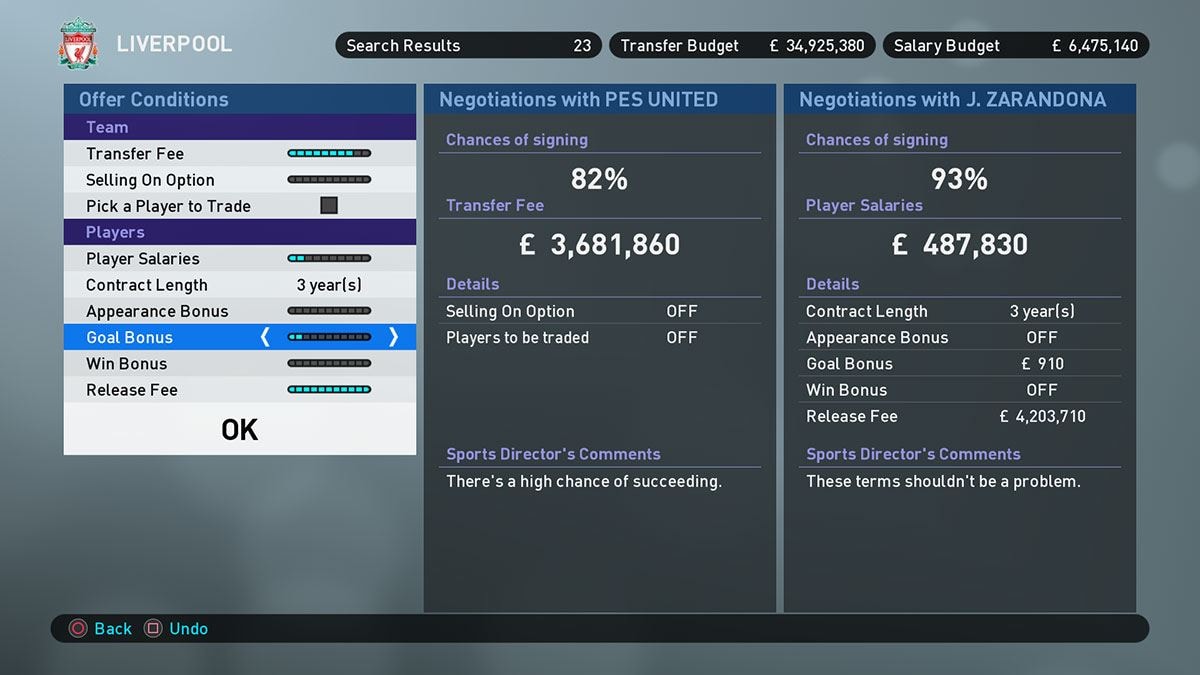 Release clauses are also still omnipresent in transfers in PES 2019, which doesn’t reflect the nature of deals in the real football world. If you want to get rid of it, you'll end up paying through the nose in salary. And in some cases, it's virtually impossible to sign players without keeping a release clause in place, because the success percentage drops so low that it cannot be recovered even if you’re okay with piling on all kinds of bonuses. The AI in PES 2018 was stupid enough to not activate it, unless you were playing on the tougher ‘Challenge Mode’, but that doesn’t justify Konami’s indecision to fix things here.

Though it’s disappointing that Konami chose to not renew its UEFA deal, not simply for what it added to the game but also in what it represents to its long-term commitment to PES, it's likely the numbers weren’t there to justify the expenditure on Europe’s top cross-league competitions. That said, there are aspects of the game that don’t need that kind of money to be made better – be it gameplay that’s stuck in a weird balance of realism and arcade-y fun, the nonsensical transfers or the lacklustre presentation – but it’s starting to feel like PES might have conceded one too many.

Further reading: PES, PES 2019, Pro Evolution Soccer, Pro Evolution Soccer 2019, Konami
Akhil Arora Email Akhil Akhil Arora covers entertainment for Gadgets 360, interviewing stars such as Christian Bale and Anurag Kashyap, covering series premieres, product and service launches across the globe, and looking at American blockbusters and Indian dramas from a global socio-political and feminist perspective. As a Rotten Tomatoes-certified film critic, Akhil has reviewed over 150 movies and TV shows in over half a decade at Gadgets 360. When he is not completely caught up with new film and TV releases, Akhil ...More
PUBG Xbox One V 1.0 Update Now Live
Netflix to Offer Video Streaming Services on Hathway's New Set-Top Box, Launched at Rs. 2,999

product Out now on PC, PS4 and Xbox One, Pro Evolution Soccer 2019 pulls back on the goal-fests with some welcome gameplay changes. 3.5 out of 5 stars