Pro Evolution Soccer 2017, which released on Tuesday, is the latest iteration in Konami's football game franchise. The PES series is one of the two major football games for PC and consoles, competing with EA Sports' FIFA. The FIFA series has long been the undisputed leader in this segment, but does PES have enough to tempt gamers away?

The first thing we noticed about PES 2017 is the lack of licences for several major clubs. EA Sports' marketing machine is proving to be way too strong for Konami. FIFA has exclusive deals with clubs such as Juventus, Manchester United, and Real Madrid, apart from partnerships such as the one with the Spanish La Liga. This leaves PES 2017 with randomly named teams such as PM Black White, Man Red, Man Blue, etc. Commentators will not mention these teams either. This creates an odd paradox because Konami has licenced UEFA Champions League and UEFA Europa League, but most of the teams you can play with in these tournaments are likely to have fake names, kits, and crests.

If South American leagues excite you more than their European counterparts, then PES 2017 is the game for you. It has licences for all major clubs in South America. PES 2017 features real players with excellent likenesses, so the game doesn't suffer much. You can edit the club names yourself too, and these names should also be available via a patch from the game's active user-base, if that bothers you too much. Once you start playing though, all those issues will be forgotten.

PES 2017 has a whole bunch of improvements that fix our frustrations with PES 2016. The refereeing is improved and you can no longer get away with off-the-ball fouls as often as you used to in the previous iteration. PES 2017 retains an arcade-y feel, which is a pleasant contrast to FIFA's recent move towards in-game realism. This means that you will end up scoring plenty of wonder goals, find yourself making a lot of last-ditch sliding tackles, and in general trying things you wouldn't in FIFA. 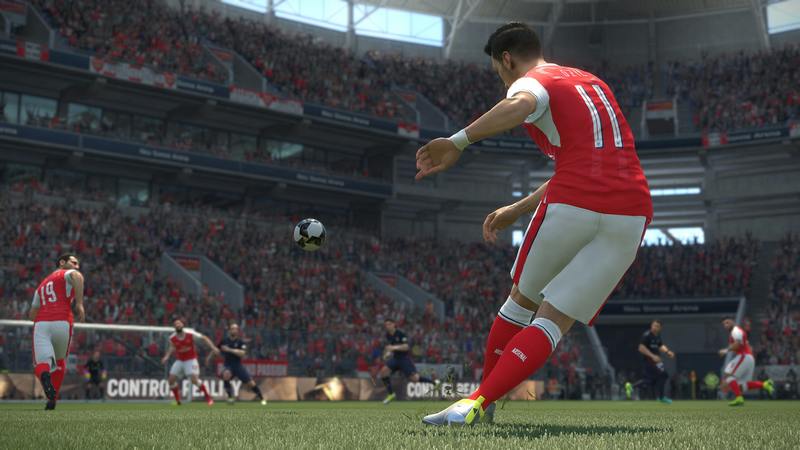 As with all arcade football games, pace is unrealistic in PES 2017. You'll find mediocre fast players running rings around the opposition and slower players will often be unable to compensate for that. Let's look at Arsenal's Per Mertesacker as an example. Mertesacker is a pretty good defender but he lacks pace. In PES 2017, we found ourselves conceding a lot less when we replaced him with Gabriel Paulista - a faster player with a lower overall rating. In real life, Mertesacker compensates for lack of pace through intelligent positioning. Not so much in PES.

Having said that, defending feels a bit easier in this game, and when you are attacking, getting behind the AI's defensive line is a lot harder now thanks to the AI generally defending better as a unit. The conservative tackle (when you try to pinch the ball off the opposing player instead of sliding in) is far more effective in PES 2017. We noticed defenders - both our own and those controlled by AI - taking the ball off players with clean, perfect manoeuvres far too often. The player running with the ball often reacts too slowly, and at other times the defender defies physics to take the ball away - with certain tackles it should be impossible for the defender to stay on his feet, but those rules don't necessarily apply in PES 2017.

This feels like a bit of a balancing act by Konami. You could load the team with pacey players and yet find yourself frustrated by a skillful player or AI with average defenders. The AI is much-improved in PES 2017 too. We noticed players in our team making excellent runs, and in general coordinating a lot better, when compared to PES 2016. If you play with a team such as FC Barcelona, where three world-class players operate in the front line (Luis Suarez, Neymar, and Lionel Messi), you'll suddenly find most of your through balls landing at their feet. When you're running with the ball, one of those three will make a great run for you to pick out. However, scoring is not so easy.

The goalkeeper is a bit overpowered in PES 2017 but that's a good thing. Football is a low-scoring game and it should remain so even in arcadey games. With that said, if you are a moderately skilled player and use the finesse shot to score, then you will find yourself scoring some crazy curlers. With top players such as Lionel Messi and Mesut Ozil, the curl on finesse shots is almost surreal. We're not sure if there's a bit of a bias in the game for left-footed players, but they're the ones who seem to hit the best curling shots. This feels unrealistic but we think every player will enjoy these moments, unless they're losing to wonder goals of course. 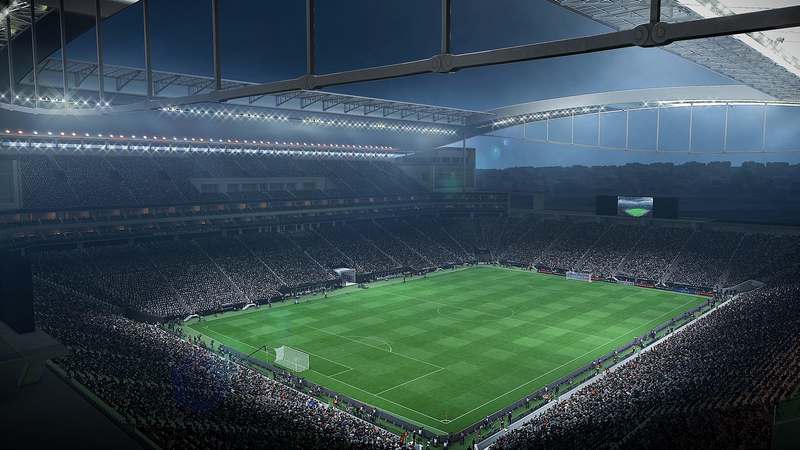 AI catchup adds another level of challenge to the game. The game appears to have a dynamic difficulty level for certain games. For example, we were playing as Arsenal in the Champions League and we beat Schalke 3-1 away in the quarter finals. In the return leg at Arsenal's stadium, we couldn't beat Schalke in five attempts. Finally we just resigned ourselves to losing 2-0 and qualifying via the away goals rule. This happens a lot if you start beating the AI too easily. You could be strolling to a win in the first half and the AI suddenly transforms into a world-beating team in the second.

PES 2017 adds some advanced instructions for the football intellectuals as well. You can set up to four instructions per game. When attacking you could set instructions such as Wing Rotation (your wingers switch places) or Attacking Full Backs. For defending instructions such as Centring Targets (leave one forward ahead while the rest of the team defends) or Gegenpressing allow you far greater control over tactics. These instructions make a big difference on gameplay and could end up being the difference between winning and losing. You'll need to study your opponents' game plan before implementing tactics to counter them for maximum impact.

While these additions are welcome, there are a few things that we feel could be improved. The game's menus are a downgrade from PES 2016. The first screen now shows only three big cards with plenty of white space below the description. This could easily have been used to show more modes. Starting a different mode requires one click/scroll too many.

That's a minor inconvenience but the commentary and music are bigger annoyances. Music has not been a strong point of recent football games, but we still feel the need to mention that almost all of the songs used in PES 2017 are bad. The commentary is inexcusable. The commentators repeat phrases used in PES 2016, and by the time you play three or four games you'll hear them repeating phrases even if you've never played any other PES game. They sometimes give a good background about a player, but mostly the discussion sounds pre-recorded and lacks dynamism. 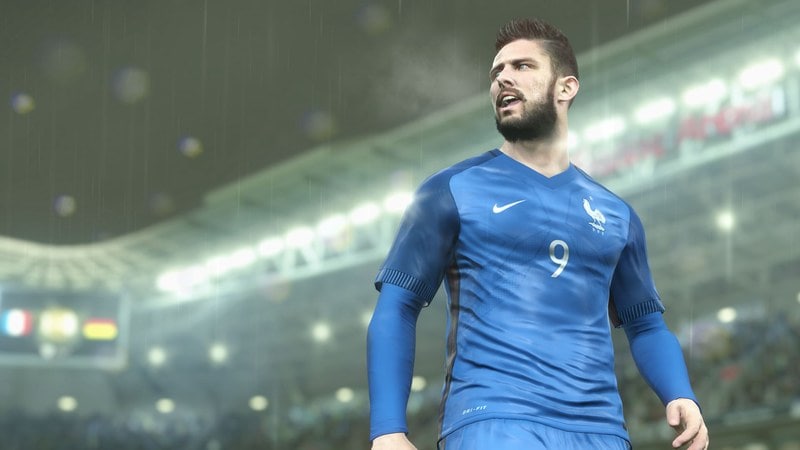 They have certain lines that they keep repeating with just the name of the player replaced. For instance, one line goes something like this, "PLAYERNAME can't do much damage with his back to the goal. They've done very well to mark him." We heard this line repeated at least five times in one 15-game session. This line works when they're talking about an attacker, but once it was used it for Mats Hummels, who is a defender.

There is also a bug in the collision detection mechanism used in PES 2017. Sometimes you can get penalised or even carded for random collisions. Once we hit the pass button and the ball ran off our player a bit. He automatically ran forward, slid towards the ball, and passed it. In the process he hit another player just before getting the ball. The referee showed him a yellow card for this. Similarly one of our players won a header but was penalised because another player barged into him from behind. We also felt that the referee is a bit lenient towards shoving. Three or four defenders can often shove a player and get away without conceding a foul.

We hope Konami fixes these gameplay issues. As for commentary we don't have much hope as it's never been great in PES games. If you want excellent commentary, FIFA is the way to go. PES 2017 uses motion blur for instant replays, which lends it a nice broadcast-like feel, but the sub-par commentary often takes away from that.

Another minor complaint is about the display of certain club names. Longer club names often look like the characters have been pulled close together to make them fit, even though there is plenty of space for the whole name. You can see how bad it looks in the picture below. We hope Konami issues a patch to fix this as it does look rather ugly. 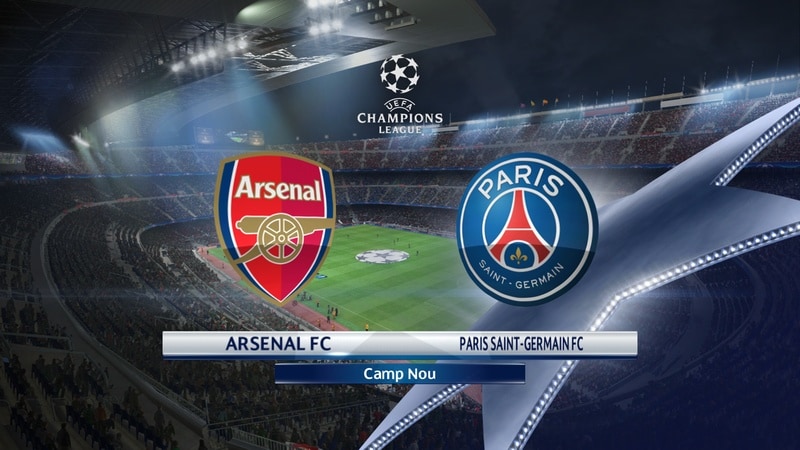 PES 2017 has several gameplay modes to keep you busy for hours. Master League is still just as fun, Champions League and Europa League are obvious attractions, individual leagues, and Become a Legend modes are all pretty good. The last one lets you play through the career of a single player. For online players myClub is PES' answer to FIFA money-spinner Ultimate Team. These modes are not new but regular PES players will enjoy them all the same.

PES 2017 is not perfect or revolutionary, but it is a solid entry into the PES franchise that fixes some of the problems of PES 2016 and features enough AI improvements that make playing a bit more enjoyable. If you want a taste of how good the game can be, try the co-op mode at a higher difficulty level - that is how we enjoyed the game the most. If you've never played football games, PES 2017 is beginner friendly. Training modes and customisable controls are good enough for new players. Experienced players will also find enough of a challenge to have a blast this game. Its only major weakness is the commentary. If that doesn't bother you, then you should buy PES 2017.

We played a review copy of PES 2017 on the Xbox One for this review.

Apple's AirPods May Be a Bit Ahead of Their Time
Vu Launches Premium UHD and Curved TVs in India, Starting Rs. 1,00,000