What do Final Fantasy XV, The Last Guardian, and Nioh have in common? They’re all oft-delayed video games that are finally seeing the light of day. Announced in 2004 under the working title of Oni, it was first meant to be a traditional Japanese role-playing game, then it pivoted to a hack and slash game, similar to the Dynasty Warriors series. Finally, it releases as Nioh, an action role-playing game in the mould of Dark Souls, with an emphasis on over the top bosses and punishing difficulty. Or so would the game’s marketing have us believe. Could it be more than that? Read on to find out.

Nioh puts you in the role of William, an Irish sailor who finds himself in an alternate history version of feudal Japan. The country is at war and Yokai (supernatural monsters in Japanese folklore) flourish in the chaos. Aside from purging the land of demons, you’re on the hunt for a mysterious enemy who seeks to harness Amrita — a power that allowed the British Empire to lay waste to a Spanish Armada.

Suffice to say, Nioh has a surprising amount of exposition. Key moments are punctuated by cut-scenes and each area is peppered with corpses. Tapping a button near them gives you an idea of what happened prior to your arrival. Unlike minimalist story-telling of Dark Souls and Bloodborne, developer Team Ninja has ensured there’s more than a fair bit of narrative to go around. For most part, Nioh walks the fine line between functional and over the top, and does just enough to keep you hooked. But what really kept us coming back to Nioh was its gameplay. You have three combat stances to choose from — high, middle, and low. Each of them let you wield your weapon, be it a sword, spear, axe or two swords if that’s your poison, in a fashion that either maximises the damage you dole out (high), reduces the amount of stamina or Ki as the game calls it you use (low), or gives you a balance of both (middle).

While stamina is a factor in the Souls games, it's present here with a twist. As you stab and maim your way through multiple enemies, you’ll notice a blue circle surrounding William. A perfectly timed button press results in you regaining all your stamina at once. It’s called Ki Pulse and it works akin to the Active Reload feature from Gears of War. Once you get the hang of using it, you’ll be able to turn the tide of battle with ease, particularly against the game’s many Yokai. Interestingly, the game also shows you how much Ki your opposition has, giving a tremendous amount of depth and strategy to the gameplay, as it lets you plan your attacks for when they’ve depleted their energy.

Its this fusion of these mechanics coupled with fluid combat that make Nioh a treat to play. More so when you consider the level of customisation on offer that allows you to fine-tune William to your play style. From specialising with dual swords or grapples (along with unlocking attacks unique to specific weapons) to swapping out guardian spirits — mystical beings that grant bonuses when you evade perfectly or complete an attack with special moves — there’s a lot to tinker with under the hood aside from the obvious pooling of experience points to specific attributes such as health and dexterity. 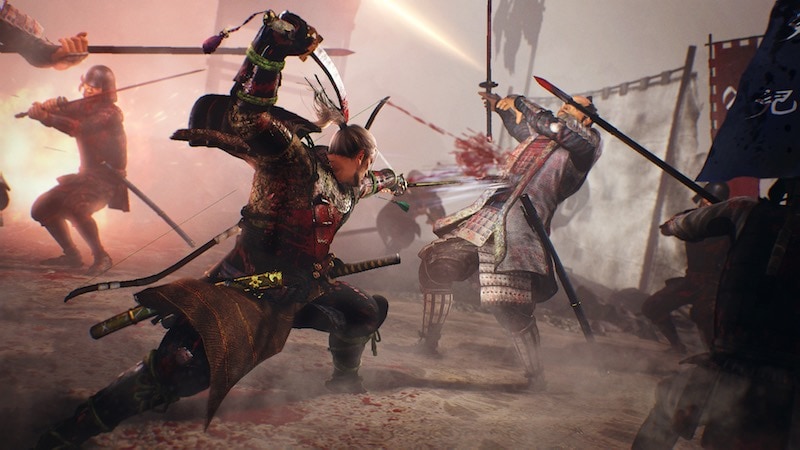 And there’s more. Nioh makes the most of its setting with the variety of enemies on display. There’s the usual lot of bandits and guards to contend with as well as a slew of Yokai bosses ranging from a giant javelin-weilding toad to an octupus-like monster complete with tentacles. Each has its own weaknesses and attack patterns, and poses a unique significant challenge. Nonetheless, the satisfaction gained from defeating these creatures is palpable.

With epic foes come epic loot. Borrowing from Diablo, there’s a wealth of weapons, armour, and items to obtain when you vanquish your opponents. They’re colour coded for rarity with uncoloured being common items, to purple being the rarest. Besides giving you an advantage in battle, the assortment of gear on offer can be traded in to let you level up too. It’s a welcome addition that makes Nioh more fun that it should be as loot drops are randomised, which means, at times, normal enemies and mid-bosses can grant you some extremely rare items.

One area where Nioh falls short is in its presentation. Certain environments such as arachnid-infested castles and burning villages look stellar. But others like its opening level don’t seem to have the same attention to detail. It is this inconsistency that takes away from the experience. Furthermore, while Team Ninja should be lauded for allowing us to prioritise frame-rate or resolution as we prefer, we noticed some frame-pacing when locking the frame-rate at 30fps. What this means is, even though it was running at 30fps, it didn't look like it did and felt choppy resulting in a weird sense of discomfort between the timing of our attacks and them showing up on screen. Combat simply didn’t feel as responsive as it should be, forcing us to choose a variable frame-rate instead. Then again, we felt Bloodborne and Final Fantasy XV did not suffer from frame-pacing issues, while many felt otherwise. Your mileage may vary. 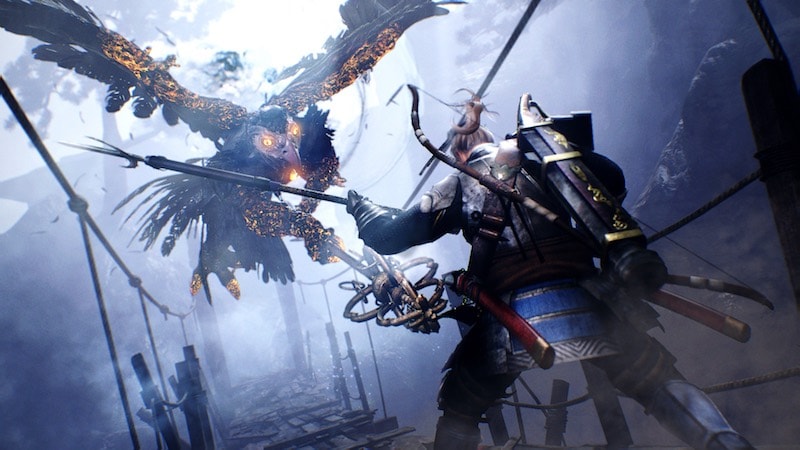 On the surface, Nioh is a compelling take on a sub genre of role-playing games created by the Souls games and its ilk. However by putting stamina at the core of its combat and thoughtfully borrowing mechanics from other titles, it results in a game that’s greater than the sum of its parts. Whether you’re a Souls veteran or have a passing interest in such games, Nioh is well worth checking out.

product PS4-exclusive Nioh may be marketed as yet another Dark Souls, but could it be more than that? We tell you. 4 out of 5 stars