The Nintendo Switch is Nintendo's successor to the Wii U, a home console with some great ideas and games that fell flat in execution. But the Switch has more in common with the iPad, or the slew of Android devices that have captured mainstream attention. Nintendo's own handheld devices, the Nintendo DS and 3DS had their share of the spotlight, but they never had the mainstream reach of the Nintendo Wii which released in 2006. Does the Nintendo Switch do enough to catapult the company back to the masses? Read on to find out.

As you probably know by now, Nintendo Switch is a hybrid console. You can use it with an HDTV (no component or composite connections here, only HDMI), and as a handheld. On the go you have a generous 6.2-inch display that shows off games in 720p with a Joy-Con — the bundled controllers for the Switch - on either side. Drop the Switch into a dock, and it becomes your usual home console.

In the box you get two Joy-Cons with a grip that lets you use them as one single controller when they're not connected to the console; two Joy-Con caps that let you strap a Joy-Con to your wrist when playing motion controlled titles like 1-2 Switch; the Switch Dock; HDMI cable; a USB Type-C power adapter; and the ‘tablet' which houses the guts that power the entire experience. It's worth mentioning that there are no bundles for the Nintendo Switch, well officially at least. If you were expecting a game along with the Switch, you'll be paying extra, much unlike the Wii or the Wii U which had Wii Sports and Nintendo Land respectively.

For most part, the Nintendo Switch is a sturdy piece of kit constructed out of durable plastic. It doesn't feel like a toy, the way the Wii U did, nor does it feel cheap. It's not shiny nor a finger-print magnet. If you've spent the better part of the decade using Nintendo handhelds such as the DS and 3DS, then the lack of a stylus is mildly disturbing, but far from a deal breaker.

Using the Nintendo Switch in handheld mode, the LCD panel is bright with fairly accurate colours, and the Joy-Cons are a treat to use, whether attached to the tablet or not. While some have reported that the Joy-Cons are prone to going out of sync or losing connection to the device, we didn't face this problem at all, despite trying them at various ranges across five days. The kickstand at the back, which covers the memory card slot, is the sole flimsy component from an otherwise sturdy device.

In terms of endurance, we saw around three hours of battery life while in tablet mode in The Legend of Zelda: Breath of the Wild, and almost double that in less graphically intensive games such as Puyo Puyo Tetris, which is actually pretty reasonable. As an added bonus, you can use a regular powerbank (2A) to charge the Nintendo Switch on the go using a USB Type-C cable. The only catch is that the Switch will only charge in sleep mode, gaining three to four percent in ten minutes of charging. While the Switch is on, it doesn't charge at all. 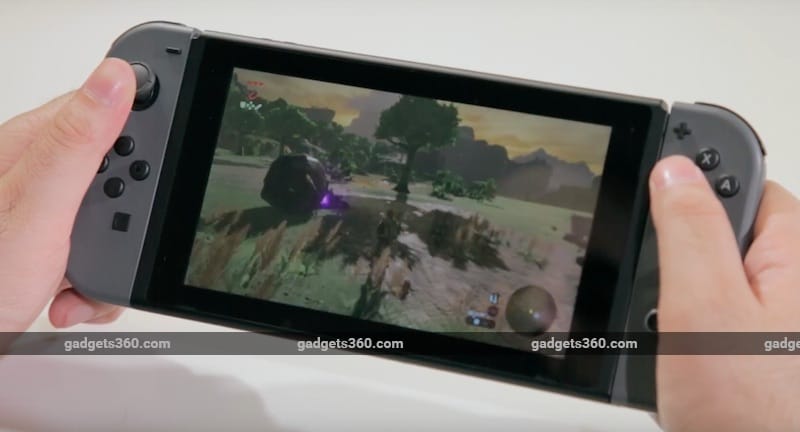 Using the Switch on a TV is straightforward. Regardless of the state the Switch is in — on, off, or in the middle of a game, all you need to do is put it in the provided dock. It doesn't provide any additional processing power, simply housing three USB ports, an HDMI port, and a USB Type-C port for its power. Much like the Switch and the Joy-Cons, the dock is thoughtfully designed, allowing you to hide HDMI and power cables from plain sight. Our only grouse is that it should have been lined with soft material to prevent any scratches on the screen of the tablet.

Aesthetic concerns aside, the performance of the Nintendo Switch when docked is competent and playing games in handheld as well as home console modes is almost the same. We got a slightly smoother frame rate in The Legend of Zelda: Breath of the Wild in a few segments, but otherwise they run nearly identically. Visually, you're restricted to 720p on the go, which is upscaled to 1080p when used with a TV. As for Zelda it plays at 900p, something Nintendo confirmed prior to launch. That said, it looks great even on the bigger screen. The transition is flawless.

While the Nintendo Switch uses game cartridges that are region-free, you can augment its 32GB (around 25.6GB usable) space with Micro SDXC cards upto 2TB. The surprisingly unrestricted digital storefront that lets you buy games from any region — much like the PS4, and unlike Nintendo's previous consoles. 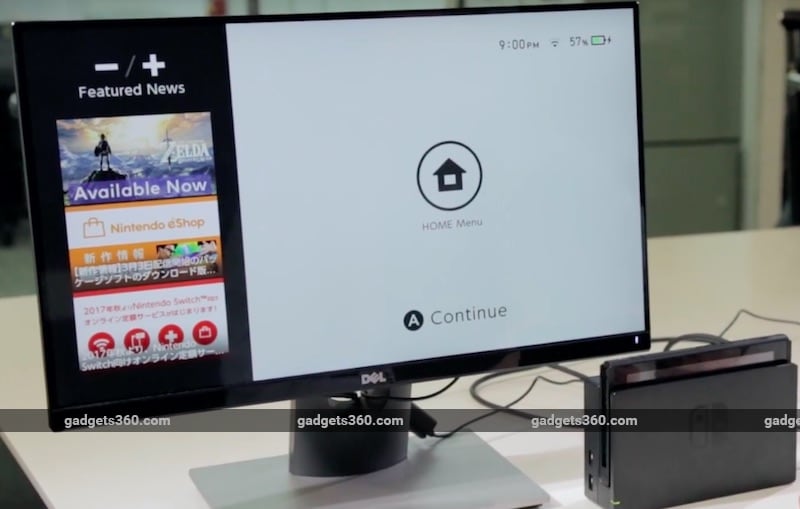 All of this is powered by an unobtrusive interface. The Nintendo Switch UI is straightforward and simple to use with clear to understand menus. The same applies to the eShop that's easy to use as well. There's a news section, which shows the latest games and system updates, and tells you what to expect from Nintendo and other game developers. Long time Nintendo fans will however miss the lack of music in the eShop, particularly given how memorable its been in the past. It's not clear why Nintendo removed it, although perhaps it was to save battery life on the go?

What it lacks in past niceties, the Nintendo Switch somewhat makes up for in modern amenities. Sharing screenshots is easy. A simple tap of the dedicated sharing button lets you capture a screenshot and the Switch's memory management is good enough to let you suspend the game you're in, to tweet your image or post it to Facebook. But you can't record video just yet - this is expected in a future update. Our other gripe is that Nintendo doesn't tell you how much of a game or an update has been downloaded - only how much time is left. There's no button to pause downloads either. In 2013, the PS4 also had similar issues with downloads, which were rectified later. Hopefully Nintendo will also do so quickly.

Where Nintendo scores over the competition is with its launch line-up. As cliched as it sounds, there's something for everyone. The Legend of Zelda: Breath of the Wild is a no-brainer purchase — merging exploration, combat, and puzzles with an enthralling open-world while the likes of I Am Setsuna, Disgaea 5 and Super Bomberman R, available right now, are guaranteed to scratch role-playing, strategy, and multiplayer itches well enough.

So is the Nintendo Switch worth the price of admission? In markets like the US, Europe, and Japan, where the company has an official presence, most definitely. More so at the $300 (around Rs. 20,000) price point it occupies. In India, matters are a little more complicated. Thanks to Nintendo being a no show here, you can spend anywhere between Rs. 35,000 and Rs. 40,000 depending where you buy it from locally. You're better served picking it up abroad through a relative or a friend if you're not travelling. Importing it is an option as well. Though with a host of launch day issues reported including dead pixels and Joy-Cons not working — granted we didn't encounter any of these issues— we'd recommend buying it in a manner where you can check it thoroughly before bringing it into the country.

This caveat aside, the Nintendo Switch is proof that Nintendo knows what people want from a good handheld, and married that with its home console expertise. Moving from Zelda on the go to playing it on a big screen simply means you can get more gaming done, which is never a bad thing. And its done flawlessly in a manner akin to Apple's 'it just works' mentality. It might not have the technical might of the PS4 Pro or even the Xbox One, but that means little when the rest of the experience is as good as it is.

We discuss the Nintendo Switch on the Transition, Gadgets 360's gaming and pop culture podcast. You can subscribe to Transition via iTunes or RSS or just listen to this episode by hitting the play button below.