Moonlighter for the PS4, Xbox One, and PC is an action role-playing game (RPG) that has you in the shoes of Will, a merchant. Yes, instead of donning the garb of a wizard, demon, or the usual hero that most RPGs saddle you as, you run a shop instead. During the day you’ll peddle your wares to many a budding hero, and at night you’ll take on dangerous dungeon runs to earn all manner of whetstones, fabrics, vines, glass lenses, and rare metals to sell at your store.

All of the action in Moonlighter takes place in Rynoka — a small village where your store is located — and a set of gates located just outside it. These gates lead to different dungeons teeming with monsters aplenty and defeating them nets you the aforementioned items you need to sell at your store. Moonlighter gives you a host of ways to do this.

From your very first weapon, a broom, to an enchanted fire-spewing great sword, you can craft your arsenal as you progress with some of the loot you bring back. Throw in a variety of swords, bows, potions, shields, and armour into the mix, and there’s an option for every style of play. 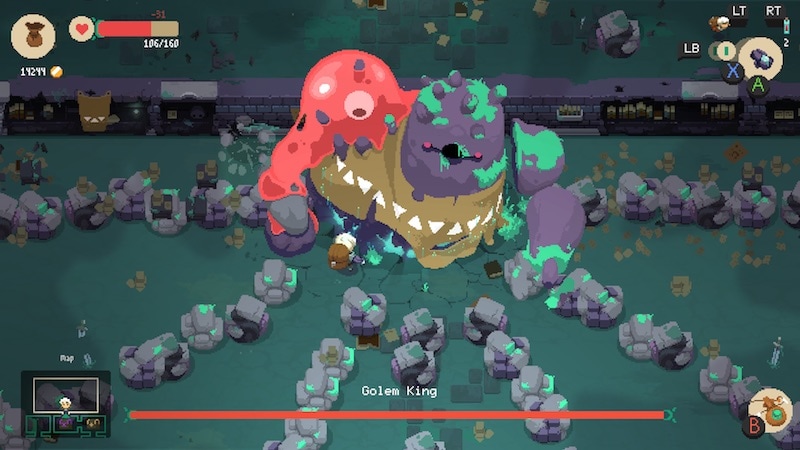 With Moonlighter sporting a top down view, it’s easy to survey your surroundings particularly in its combat sections. Most rooms in its dungeons are filled with enemies aplenty and this perspective allows you to prioritise which foes - stone soldiers that use swords and shields, slime fiends, or turrets spitting blue magic - to attack first. The game’s dungeons are procedurally generated.

What this means is items, enemies, and environments are placed in the game at random by a pre-defined algorithm. In theory, this implies that each area and locale should be different each time, though in our experience this wasn’t really the case with specific monster types and environmental elements like stones and bottomless pits were repeated quite often. While this made battles a tad easier, it also ensured that the game didn’t feel as fresh.

As for Moonlighter’s combat, each weapon has its own attack speed and weight, which means whether you are using a great sword or a bow, they feel responsive. While you have the option to defend yourself with a shield, you can also evade attacks with the press of a button. We ended up using it more often than we would have liked since raising a shield to block incoming blows felt clunky, making a quick dodge roll out of harm’s way the order of the day. As you progress, you’ll come across items that let you teleport out of dungeons if you find yourself overwhelmed by monsters - it’s a useful feature if you run out of potions needed to keep your health up. 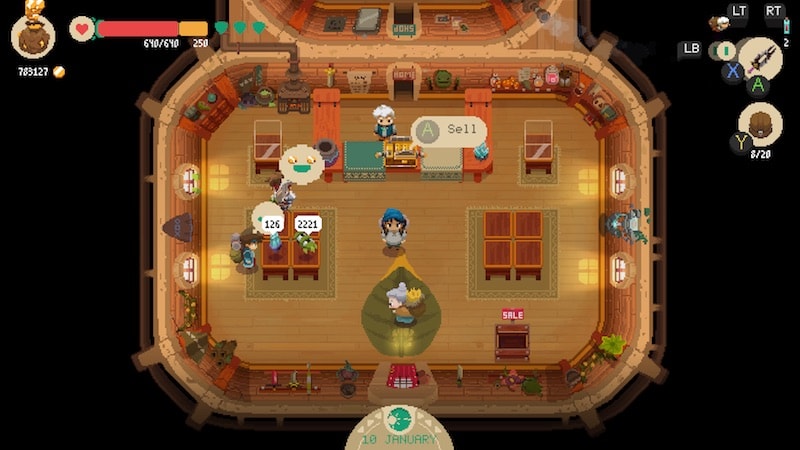 Where Moonlighter really shines is in its store management. You select items to put up for sale, notice customer reactions — displayed by great looking emojis — and tweak your prices accordingly to match their expectations. In addition to this, you can take a look at a product’s popularity along with its supply and demand to make further changes such as tweaking the quantity that is put for sale at a given time.

All of this is easy to understand and each piece of gear has a description along with its price history that helps make your decisions easier. Plus, you have options to bolster your store and the village at large. You can hire staff, expand your floorspace, and even recruit other retailers whose wares you can use to traverse the nearby dungeons. Thanks to the fantastic music that punctuates these segments of gameplay, being a merchant is when Moonlighter's the most fun.

With slick store simulation and solid — albeit somewhat flawed — combat, Moonlighter is a game worth checking out if you’re in the mood for something different. It’s not perfect, but there’s hours of enjoyment to be had leading the double life of a storekeeper and adventurer in the village of Rynoka.

Gadgets 360 played Moonlighter on the Xbox One X. Moonlighter is out May 29 for PS4, Xbox One, and PC priced at $20 in the US and Rs. 1,664 in India with a Nintendo Switch release planned for later this year.

product Moonlighter for PS4, Xbox One, and PC release date is May 29, but should you buy it? Find out in our Moonlighter review. 3.5 out of 5 stars