Monster Hunter World is an action role-playing game from Capcom. Known for franchises like Resident Evil and Street Fighter, Monster Hunter World is the latest in a long-running series stretching back to the days of the PS2. As we stated in our Monster Hunter World preview, it is perhaps the most accessible entry to a world of fantastic beasts, over the top weapons, and cat companions. After spending more time with the final release of the game, does it still ring true?

In Monster Hunter World, you’re a hunter with the Fifth Fleet - a collective of explorers that’s made its way to Astera - a base consisting of hunters and scholars dedicated to unravelling the mysteries of a region known as the New World. It acts as the hub for you to trade gear and items, craft new equipment, or simply concoct and consume new dishes cooked by cat chefs that give you a boost in battle by temporary increasing stats like health or attack power.

Astera is also the location that lets you take on new quests. These usually have you tracking down all manner of monsters and slaying them (it is called Monster Hunter after all). From the poison spewing Pukei Pukei to the highly deadly flame spewing Rathalos, each foe in Monster Hunter World is almost always bigger than you and requires a different strategy to defeat, as each monster has specific weaknesses and behavioural patterns, making every encounter different from the last.

For most part, these encounters are satisfying - particularly when you take down these behemoths for the first time without a retry. You’ll find yourself slaying them over and over again as you’ll soon realise you can craft armour and weapons with their hides, scales, and whatever else you can scavenge. While not necessary, it gives you access to better gear, that is necessary to make fights against tougher combatants a little easier.

The core combat has a welcome sense of skill and depth to it. Each axe swing and sword stab has different animations and weight, and button mashing is an easy way to lose. Mastering the timing of the arsenal at your disposal is half the battle, and it's highly fulfilling. Land a hit on a monster’s weak spot and you’ll see a tail flying off, or its shell being crushed. Monster Hunter World’s assortment of guns, axes, lances, and glaives (or combinations of all) and the visual feedback you get when using them creates a sense of gratification few games can match. It doesn’t get old either ensuring that you’re far from bored when slaying the likes of a Great Jagras the first time or the fifth time - which we needed to do to craft some armour.

This is the core of Monster Hunter World’s gameplay loop. Over the course of its 40 hour campaign you’ll traverse arid deserts, marshy wetlands, colourful forests, and valleys of corpses, discovering all manner of monsters destined to meet the business end of whatever weapon you choose. Along the way, you’ll gain loot such as ore and animal manes. This lets you craft better items, weapons, and gear. In a lot of ways, it feels like Diablo in third-person.

Instead of the bespoke classes of Blizzard’s RPG series, the attributes of your character depend on the weapons and armour you use. In our case, switching from the katana - which granted better protection from physical attacks - to the Proto Commission Axe (a sword and shield that combines to form a giant axe) - gave us better chances at surviving elemental attacks. Each weapon and piece of armour has its own upgrade path and since you can switch between them, there’s enough flexibility to take on what Monster Hunter World has to offer.

In fact it’s so good that you’ll forget any concerns you may have with its plot that barely holds its events together. Without spoiling much, you’ll gain slivers of backstory by speaking to the denizens of your settlement and while most cutscenes make sense, some of them bring in characters that were never introduced with the assumption that you’d know who they are. By and large however, the events of Monster Hunter World are coherent even if you’re new to the franchise like us. 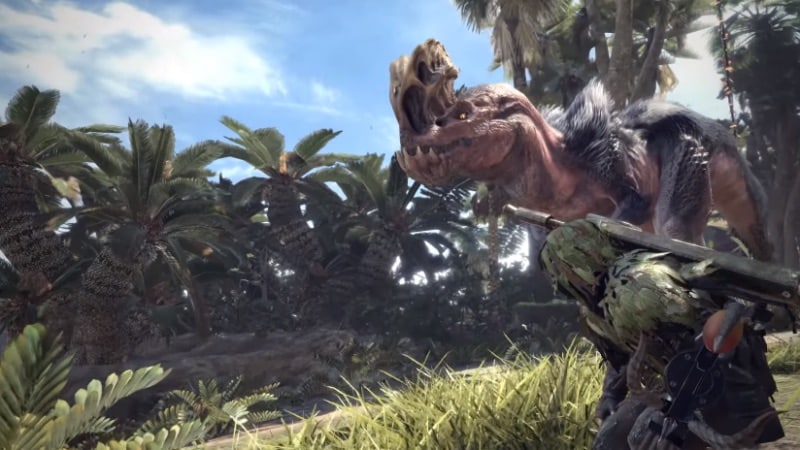 Apart from this, Monster Hunter World’s focus on online play is welcome. Early on it makes it easy to join friends in quests or put up a request for those playing the game online to help you out. Taking on a few online co-operative quests was a lag-free, fun experience and it will be interesting to see if it remains this way after the game is out on January 26.

As we mentioned in our first impressions, Monster Hunter World looks great on the PS4 Pro. Be it colossal wyverns or its many locales, it’s a visual treat. This extends to the standard PS4 barring minor texture pop-in and jagged edges. On the PS4 Pro you can choose between better image quality or frame rate, choosing the latter didn’t make the game any worse for wear and the former never made the frame rate sink to unplayable levels.

All in all, Capcom has crafted a large, sprawling RPG that’s addictive and entertaining without watering down any sense of depth. 2018 has just begun and we already have an exceptionally polished effort in Monster Hunter World. The gameplay mechanics and systems make it hard to put down. We'd recommend it for fans and first-timers alike.

We discussed Monster Hunter World on Transition, our weekly gaming podcast. You can listen to it via Apple Podcasts or RSS or just listen to this episode by hitting the play button below.