Thanks to easy accessibility for spectators, supercross racing – riding customised off-road motorcycles on man-made dirt tracks with steeps jumps and obstacles – has long been more popular than its parent, motocross, in the US. Its popularity has convinced Milestone S.r.l, the veteran Italian game developer known for Superbike, MotoGP, and MXGP, to give the sport its own dedicated game: Monster Energy Supercross – The Official Videogame.

Once you get past the brand-advertisement feeling, which isn't easy since Monster Energy's signature neon-green seeps into every corner of the game's UI, you'll find yourself in a full-on reconstruction of the AMA Supercross Championship, which takes place annually from January to May across the US. There are three championships in total: the 450cc, and both an East and West division of the 250cc. The former is considered to be the most prestigious. The 2018 season is currently ongoing – seven rounds down, 10 to go – which makes this the perfect time to release this game, to capitalise on the viewers and fanbase.

Unfortunately, because Monster Energy Supercross has been in development for a while, it's based on last year's championship, with bikes, tracks, and athletes – in both 250SX and 450SX classes – all accurate as of the 2017 season. In addition to riding the official tracks, you can even create your own with the track editor. If you follow the sport closely, then you'll notice a few things missing, such as the revised points system, and the new events, but otherwise you wouldn't be able to tell at all.

The game opens straight with a race, giving you control of three-time 450cc defending champion Ryan Dungey, at the Angel Stadium in Anaheim, California. Of course, having a great rider in a racing game isn't the same as getting control of Lionel Messi in a football game – it doesn't inherently give you any advantage. That's why, being amateur armchair supercross racers, we had no idea about shifting weight in mid-air and things like that, and triumphantly came last in the opening event.

Our failure points to a recurring problem in Milestone's games, which is the lack of a tutorial. Just like our experience with MXGP3, Monster Energy Supercross has no interest in teaching newcomers the ways of the sport, or giving tips on how to avoid disappointment the first time round. Clearly, this is a game built for the serious fans, who have watched hours and hours of actual supercross racing and don't need to be told that you shouldn't turn your front wheel too much mid-jump.

If you're a newcomer to Supercross wondering why that is, it's because while your front wheel is free to move as much as you like in the air, the rest of your vehicle is headed in the same direction when you lifted off. When you do end up back on dirt, it's physically impossible for the bike to go where you want it to. That's just one of the few amateur errors we made in the first few laps, alongside entering a jump right before a corner at too high a speed, ending outside the track on multiple occasions, which resulted in getting respawned.

Thankfully, Monster Energy Supercross is arcade-ish with a mix of simulation – you can tweak bike settings such as gear ratio, suspensions, etc. – which meant we went from being last to winning events in a short span of time. There's also a helpful rewind system – just as in Forza Horizon, Codemasters' Dirt series, and many other racing games – so you can not only figure out where you went wrong, but also change and (hopefully) do better. There's no upper limit on how many times you can activate the rewind in either, though you can opt to turn it off to get more points at the end of the race.

The rewind system is also emblematic of the lack of polish and finesse in Milestone's presentation efforts. The transition between the race and rewind feels jarring, as the music abruptly comes to a stop, and there's no actual transition scene to give you time to get back on the throttle. The lack of polish extends to the menu screens – buttons for confirming change depending on which section you're in, for example – and the background score, which is just one 30-second piece on loop. 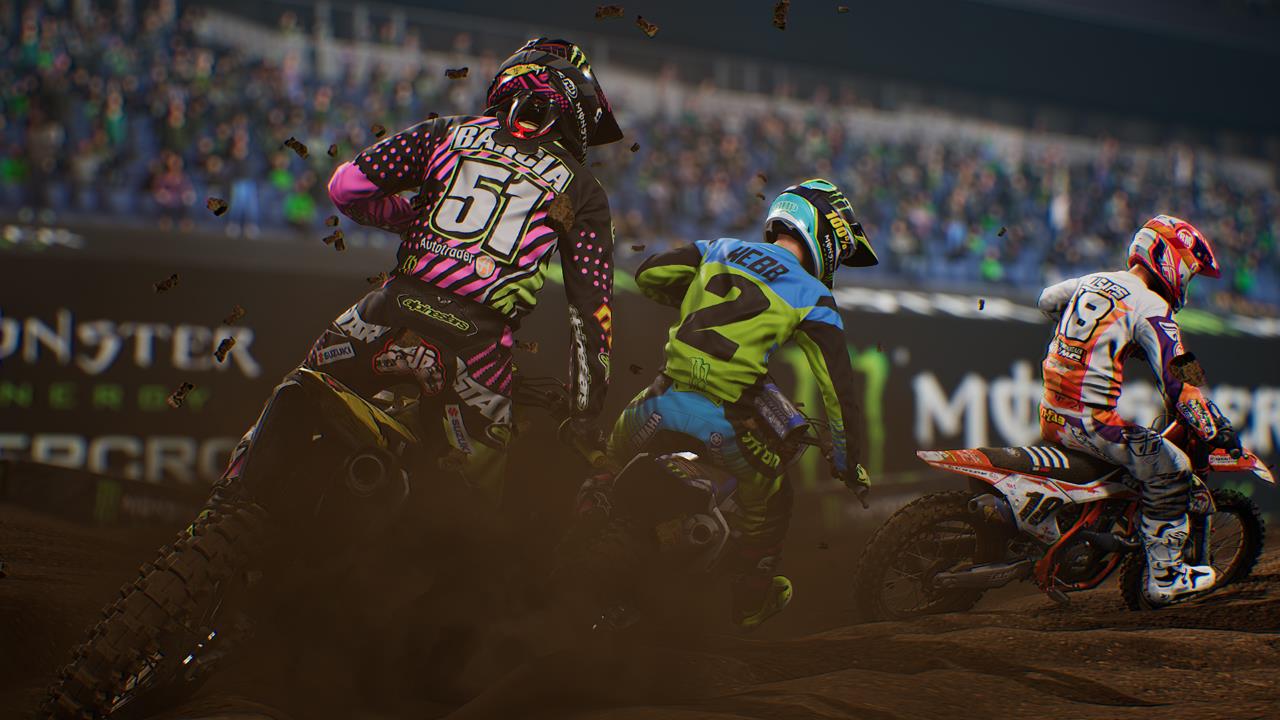 Things are definitely better on the graphics front, which won't wow you out of the gates, but do help sell the realism. Milestone says Monster Energy Supercross is a PS4 Pro Enhanced title – riders went through 3D scanning to capture their facial expressions. For any racing game, what's more important in fact is performance. While the game does offer 60fps on PC, it's restricted to 30fps on PS4 and Xbox One, and we noticed frame-skipping when all 22 riders were in the same shot.

In terms of play-time, there are six game modes across single-player and multiplayer. You can take part in a single event in both, play the official championship – 450cc and both East/West 250cc – in single-player or create a custom one with friends in multiplayer, begin a career mode that takes you from the smallest events to the biggest, or participate in a time attack mode where you're alone on the track, against the clock. You're free to use the official tracks, or custom ones you or others have created in track editor.

No matter where you race, your performance contributes to an overall driver level (as part of your Monster Energy Supercross profile), which helps unlock new sponsors, new bike modifications, and so on. Mostly everything else is pretty straightforward, though customisation and presentation is again lacking in career mode, where you can only choose from a few preset face options when creating your own rider.

Customisation and presentation is much better in the game's track editor section, which is also the only section in Monster Energy Supercross that actually comes with a tutorial video. It's quite intuitive on its own, taking you through the process – stadium shape, start design, jumps, curves, straights, and whoops, and finish line – one step at a time. We quite enjoyed our time creating tracks, and felt more inclined to ride them, since we'd been actively engaged in the design process. 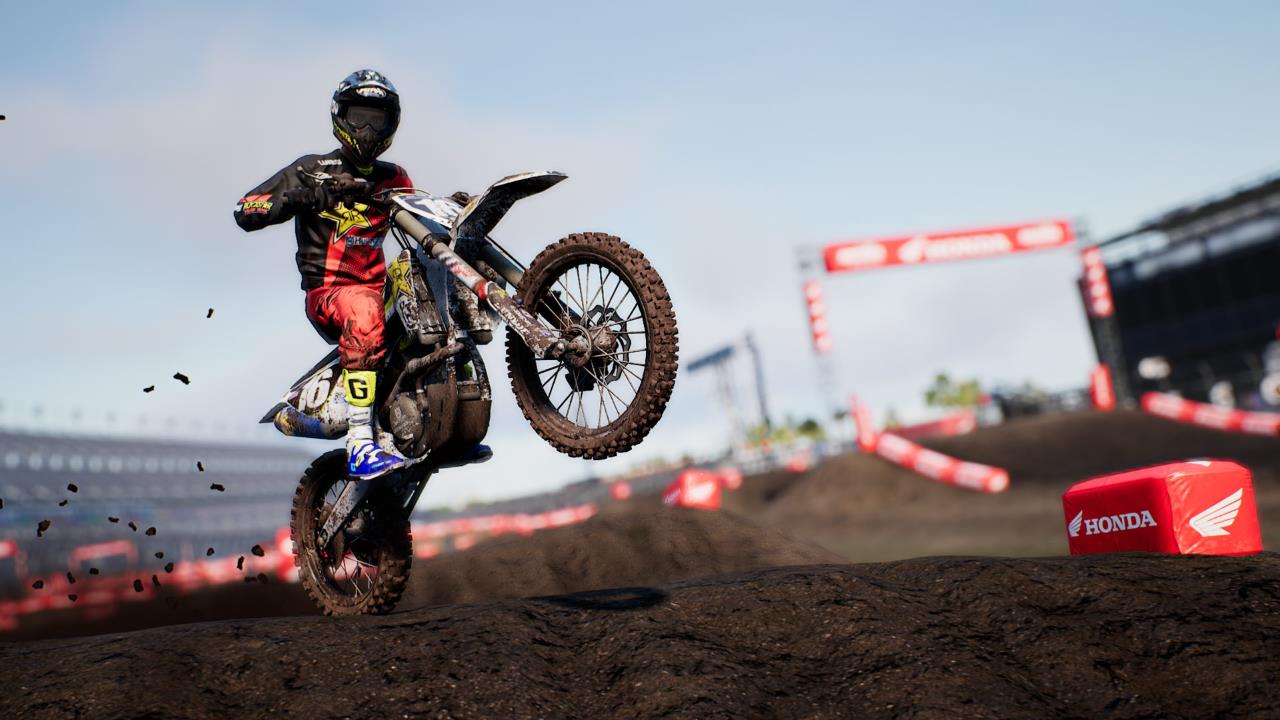 In multiplayer, we couldn't find a way to turn off voice chat, which is turned on by default. Since there's no way to control what kind of language other players use over the Internet, you should disable it on a system level if your kid is going to spend time playing online. We didn't have to wait too long to join lobbies and start races, though performance does suffer if you don't have a good Internet connection, with very obvious frame-skipping.

Overall, Monster Energy Supercross – The Official Videogame is an enjoyable racing game packed within a fairly lacklustre wrapper, one that doesn't try hard enough to please anyone but the hardcore supercross fanbase. With the sport growing in popularity – the official Indian championship, MRF MoGrip Supercross Championship, has been held non-stop since 2009 – it's clear there's a market for it around the world.

But if Milestone is truly serious about its games and not merely interested in delivering cash-grabs – this is the seventh bike-racing game it's made in the last three years, with another to come later in 2018 – then it might want to reset and focus on producing a single stellar title, one that brings together every motorcycle racing fan under the same umbrella, be it Grand Prix, Motocross, Supercross, Enduro, Rally, Speedway, or the Isle of Man TT.