The Mass Effect trilogy is one of the best science fiction game series made so far. We’d go so far as to call it our favourite work of space opera in recent times. Humans and spacefaring aliens collaborate to battle massive machines that threaten to destroy all life in the galaxy and you are at the centre of the action, with your choices shaping the fate of entire alien races and the destiny of life on Milky Way.

The Mass Effect trilogy was epic and that means any new game in the series has to bear the burden of expectations. Mass Effect: Andromeda, which released five years after Mass Effect 3, decided not to make a traditional sequel. Instead of continuing the story in the Milky Way, the developers opted to give the franchise a reboot by shifting the setting 2.5 million light years away to the Andromeda galaxy.

That’s actually a clever touch as it allows developers to introduce fresh challenges and take the series in a new direction altogether. Some of the Milky Way’s major species collaborate to build the Nexus, a massive hub that serves as a base of operations for the Andromeda expedition. The new game focuses on colonisation efforts of all these species in a new galaxy.

Four major races - humans, Salarians, Turians, and the Asari - send giant spaceships known as arks with 20,000 people each to Andromeda. After a journey that takes 634 years, each of these arks is supposed to establish an outpost on one of several “golden worlds” identified for colonisation, and then report to the Nexus, which arrived before the arks.

But if everything went according to plan, there’d be no reason for a new Mass Effect game, would there? A mysterious cloud of dark energy called the Scourge shrouds large swathes of space in Andromeda, and most of the “golden worlds” turn out to be full of hazardous wastelands that throws the colonisation plan off the rails. That is where the player, Scott or Sara Ryder, steps in. Ryder is a Pathfinder, the leader of the human effort to settle new worlds. Your job involves deciding whether a certain planet should have a military outpost, or be turned into a research base, apart from helping make planets habitable enough for life, and dealing with diplomatic situations. 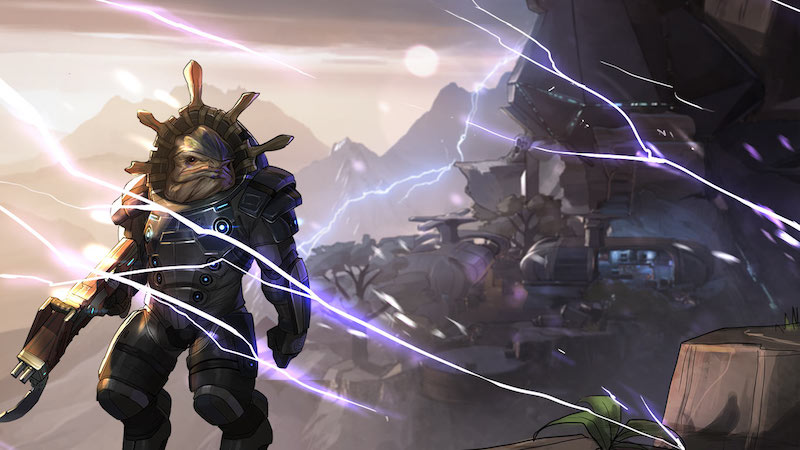 For a game with such a promising story, Mass Effect: Andromeda starts off rather slowly. The first few missions feel like tutorial missions to get new players up to speed but once you head on your first mission to a new planet, the story starts to pick up pace.

Choices and consequences
BioWare, the studio that made this game, is well-known for creating immersive role-playing games (RPGs) with the Dragon Age series to its name, apart from Mass Effect. With Andromeda, the developer has done away with the paragon/ renegade system, which made it easy to tell which choices are good, and which ones are evil. The change should allow for less binary choices, but we felt that the writing in the game makes most choices quite easy.

Choices in Mass Effect: Andromeda could have consequences in sequels, but so far, we haven’t really had to make too many difficult decisions in this game. It almost feels as if the paragon/ renegade system still exists, even though BioWare has removed colour-coded dialogue choices. That’s because it’s easy to guess what kind of response is needed from you to placate an irritated character or rile him or her up even further due to their obvious changes in tone when they talk to you.

Alien races
Despite this story remains the most powerful aspect of Mass Effect: Andromeda. Every planet you visit appears to have massive structures built by a mysteriously absent ancient civilisation, which lends an air of mystery to your colonisation efforts. Then there are new alien species in the game - the Angara and the Kett. BioWare excels at creating alien species and the angara - a race of freedom-fighting jungle-loving spacefarers - is one we’ve come to love over the course of this game. 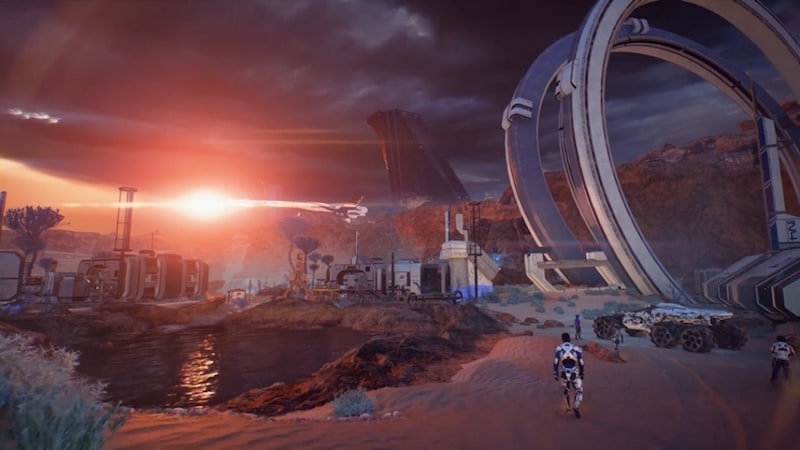 From the Milky Way, we were pleased to see that the reptile-like, resilient Krogan made it to Andromeda but were quite disappointed to find out that neither the nomadic Quarians or the Geth made it. The Geth - sentient robots - are one of our favourite races in Mass Effect and because they don’t need oxygen to survive, they’d have made ideal pilots for the arks and the Nexus. This is partly because the conflict between the Quarians and the Geth is only settled in Mass Effect 3, and all the arks left Milky Way before the events of that game. BioWare has said it may introduce these races in future games. Others such as the quick thinking Salarians and military-minded Turians make a comeback as well.

Missions and combat
Once you land on various planets and set about figuring out how to turn them from inhospitable wastelands to habitable worlds, you’ll find yourself in the familiar Mass Effect loop of squad-based combat. The weapons, armour, and combat system is pretty much the same as previous games. There’s even a narrative difficulty level for those who’re playing this game only for its story.

While we did enjoy taking down enemies during missions, we got tired of it as the game wore on. Combat in the game often feels repetitive, just like some of the game’s missions. The missions involving activating monoliths and clearing out vaults in particular got tiring a lot quicker than some others. That’s not to say that enemies don’t spring nasty surprises at times - just try battling an Architect (a massive flying dragon-robot) - even at normal difficulty to find out how.

We were so hooked to the story that combat often felt like it was getting in the way, so we just resorted to a vanguard strategy, powering our way through levels with a shotgun and an omni-blade. This was amplified with our choice of team mates. Yes, much like previous games, there’s a host of aliens and humans to help you wreak havoc on the battlefield. Our favourites include Nakmor Drack - a Krogan war veteran who makes for an excellent squadmate along with the game’s angaran character, Jaal if you want someone to provide long-range rifle cover, or Cora, one of your earliest human colleagues in the game for biotics. 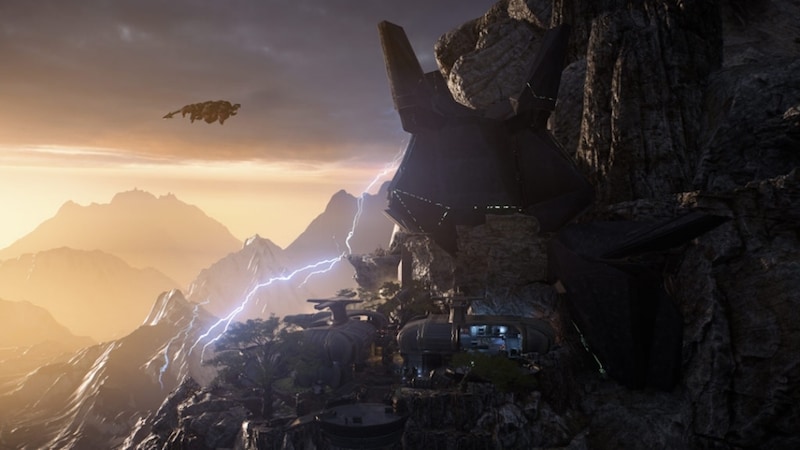 Characters and chemistry
In typical BioWare fashion, squadmates have their own chemistry. If you’ve played Dragon Age: Origins, you might remember Alastair and Morrigan arguing all the time. Similarly, Mass Effect: Andromeda has a nice way of telling you more about the characters who take on all kinds of foes with you wherever you go. For example, Turian squad mate Vetra and the aforementioned Drack get along surprisingly well and have a pleasant conversation every time and that tells you more about those two, some of the game’s lore (Drack is around 1,000 years old), and even about other characters in the game. Even when you’re walking around the Tempest - your ship, you catch characters chatting with each other and this adds to the immersive experience in the game.

Unfortunately, Mass Effect: Andromeda’s characters have terrible face animations. As real as chatter between two characters feels when you are listening to it, one look at their faces destroys that illusion. When talking about a close one’s death, characters look like they might be talking about breakfast. Their faces look oddly neutral no matter how happy or angry they are. This harms the game as some crucial moments in the game are totally ruined.

Logical fallacies
There are certain logical fallacies which started to annoy us as the game wore on. When you land on a planet, you’re given a six-wheeler called Nomad to drive around. BioWare took help from publisher EA’s Need for Speed team to perfect the driving experience and that’s a commendable achievement. However, everyone else on every planet appears to be zooming around in a shuttle, so why can’t we? The game offers some mumbo-jumbo about the weather being too harsh for any other vehicle. Even if you were to accept that, how does that explain raiders or aliens appearing everywhere via shuttle?

Then there are missions in the Nexus that will make you go from the Cryo Bay to the Operations area, then to the Habitation Deck, and then to the Docking Bay for no real reason. Many times you just have to run around to find certain people and talk to them. Humans have advanced to the point where they can traverse to another galaxy, but clearly not enough to develop a simple, secure communications tool that lets them talk to each other without running around a satellite-size ship. Similarly, there are missions that require you to go to specific points in the Nexus to do certain things - including downloading a bunch of films. Is BioWare really trying to tell us that humans have reached Andromeda but can’t download films to the ship computer the moment it docks at the Nexus?

Mass relays were a big part of the original Mass Effect trilogy as they allowed ships to travel instantly between star systems but they’re absent from Mass Effect: Andromeda. We aren’t entirely sure how all these species are traversing between star systems in Andromeda’s Heleus cluster instantaneously. That’s another thing the writers probably need to address. 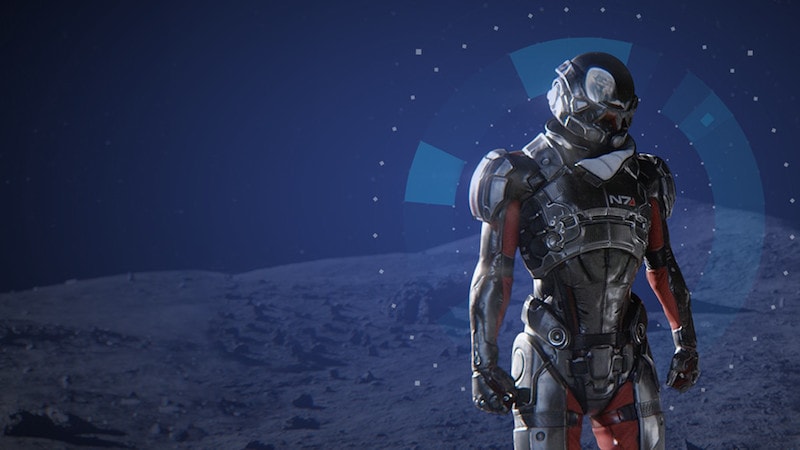 Performance
Mass Effect: Andromeda also suffers from some performance issues on the PS4. We noticed several stutters especially while driving around planets or and sometimes even while jumping. Mostly these would coincide with a large group of attackers popping up in the background. We also found a few bugs where our character’s feet got stuck in a mountain or other characters were repeating dialogues over and over.

The game also has painfully long loading screens at several points. Be it moving from one part of Nexus to another, going from one planet to the next, or sometimes even opening certain doors in some areas. Some of these doors take way too long to open, which leads us to believe that the game is trying to load things behind that waiting time. We feel that Mass Effect: Andromeda could use a few updates to iron out some of these issues.

Verdict
If you’ve never played any game in the series, then we’d recommend you catch up either by playing the game or reading the story. There are plenty of plot points that won’t make sense to new players if they don’t know everything that’s happened before. For fans of the series however, Mass Effect: Andromeda is a fantastic new entry to the franchise. There are several annoyances with the game, but, overall, BioWare has delivered yet another stellar role-playing experience with a fascinating story to boot.

Further reading: Mass Effect, Mass Effect Andromeda, Mass Effect Andromeda Review, BioWare, EA, Electronic Arts
Pranay Parab Email Pranay Pranay is in charge of podcasts and videos at Gadgets 360. Over the years, he has written over 500 tutorials on iPhone, Android, Windows, and Mac. He has also written in-depth reported features on the intersection of technology and culture, reviewed fitness wearables, been the social media manager, started two podcasts, and produced several tech videos. He loves travelling, particularly to places not frequented by tourists. He keeps running half-marathons across the country and hopes to complete ...More
Google Plans to Reduce Trust in Symantec's TLS Certificates Due to 'Continual Misissuance'
Samsung Galaxy S8's New Default Ringtone Revealed Ahead of Launch