Mario Tennis Aces for Nintendo Switch Is Tougher Than It Looks 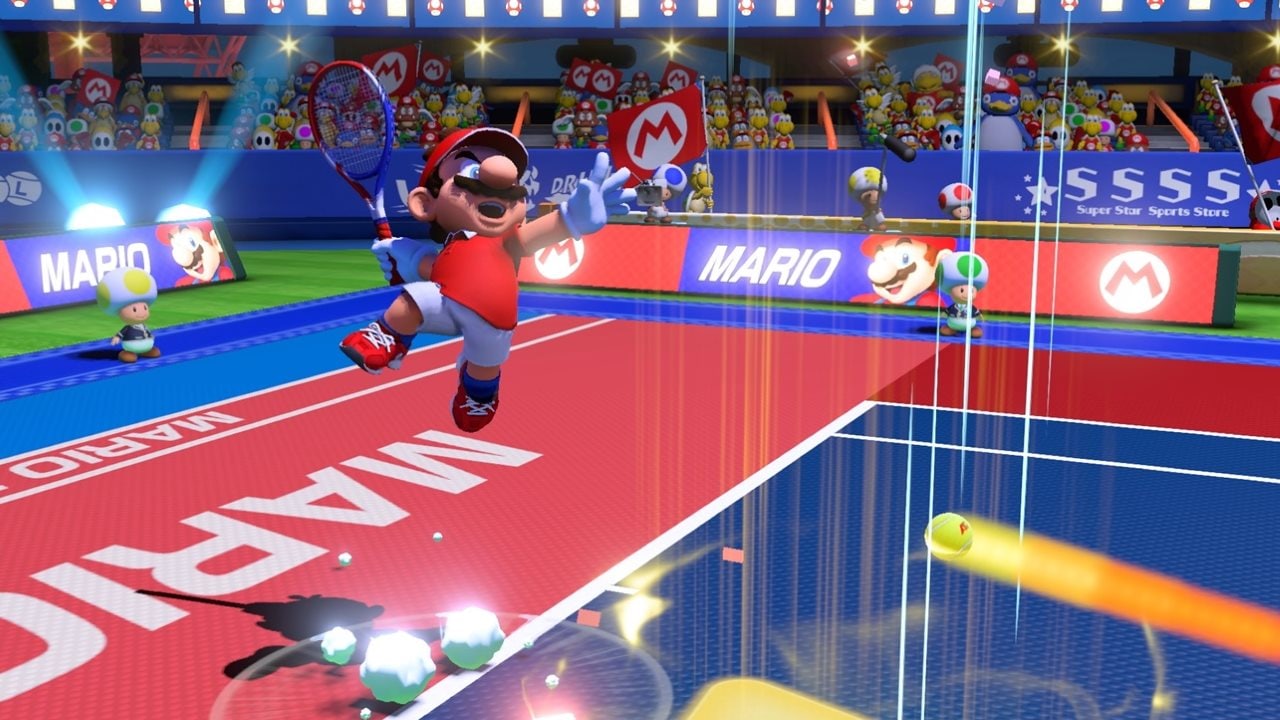 Thanks to a beta this past weekend, Nintendo gave Switch owners the first taste of its upcoming sports title, Mario Tennis Aces. Since it was supposed to be part demo and part test of the game's network code, players only had access to a portion of the single-player and online multiplayer action that'll be available in the release version, and had to be always online for all of it. We spent some time with Mario Tennis Aces and found it to be an exhaustive affair at times, because of how it keeps you on your figurative toes.

The game opens with a tutorial that runs you through every type of shot on offer. And it can be a bit overwhelming to keep track of everything. Beyond the standard top spin, flat, slice, lob, and drop shot that all tennis games need, Mario Tennis Aces also has several other options – Trick Shot, Zone Shot, Star Shot, and Special Shot – all of which are related in one way or another to something called the Energy Gauge, which builds up as you hit powerful shots and then allows you to perform the aforementioned shots.

Building up the energy meter through powerful shots requires charging a shot, i.e. holding down a button as the ball travels towards you. The caveat is that you can't move when you're charging a shot, which means you've to be in position to make a powerful return, otherwise your build-up is for nothing. Half the learning curve of Aces is understanding when to move around the court, and not get caught out as the ball is hit behind you for an easy winner.

And it's here that the first of those new shot types comes into play. Trick Shot allows you to make fancy returns, which helps build up your energy faster than the regular powerful shots. But it can be a gamble: make it and gain energy, or lose the point (and some energy) if you don't. Trick Shots are triggered by the right stick or the left stick and a double-press of X, and though we practised with the former, we slowly shifted to using the latter as moving your thumb from the buttons to the right stick didn't always afford us enough time, and an improperly-defined flick can be disastrous.

The next two – Zone Shot and Star Shot – are heavily interlinked. Once you've built up enough energy, a golden-coloured star shape will appear on the court as the ball travels towards you. Standing inside the star, you can trigger both Zone and Star via different ways. Hitting the right button/trigger allows you to enter Zone Shot, while hitting a regular shot standing inside the star triggers a Star Shot. Not only does it use more energy and is more powerful than Star, Zone Shot also has a first-person targeting mode for placing your return.

The targeting mode for Zone Shot can be operated using the left stick or by using the Switch's gyroscope. It also has a timer – the length seems to be determined by how early you arrived inside the star shape – in which you must decide where to place the ball. The targeting mode is common with Special Shot – activated by the left button/ trigger, it's the most powerful shot in Aces – which can only be used when the Energy Gauge is fully-filled. And unlike Zone Shot, Special Shot doesn’t need you to be in a specific area of the court.

Zone and Special shots have another thing in common, in that they cause damage to the receiver's racket if not defended properly. Zone Shot causes one point of wear, while Special Shot breaks the racket in one go. Rackets have three hit points, and each player has two rackets per game. To prevent damage to your racket, you need to learn how to block shots, which requires hitting the ball just as it just reaches you. But if you're not successful, it can mean the end of your game (if you're on your last racket).

That's not all. Aces also has something called Zone Speed, which sends the match into slow-motion but allows your character to move at normal speed. That helps you make returns that would normally be impossible, and stay in the rally. Activating Zone Speed depletes your energy meter, so you have to learn when to use it, and not waste what you earned in a rally by using it at the wrong time. When possible, try combining Zone Speed and Trick Shot as it compensates for the energy lost.

Mario Tennis Aces does put an awful lot of emphasis on powerful shots, be it services or returns. (With the former, it's about hitting the ball at the highest point of toss.) Technique isn't as important, as the ability to create angles is trumped by either Trick Shot or Zone Speed in most cases. On the other hand, powerful shots can push your player off balance if you don't prepare properly, and makes getting to the next return a lot less likelier. Thankfully, Aces will have an offering for classic tennis lovers at launch.

If you'd rather play without all the power-ups and stuff, Mario Tennis Aces will have a mode called 'Simple Class' in the release version, where it's purely about making shots. You'll still have the option to charge your shots. That will be a great way for people to pick up and play at parties, where they may not have the time to learn and master every type of shot. The launch version will also have a 'Swing Mode', where you can move the Joy-Cons like a tennis racket, à la Wii Sports.

The Aces demo had none of that, with all power-ups on being the only option in Online Tournament. Though Nintendo handed out points and will publish rankings, match-ups in Aces were free-for-all aka unranked. That resulted in widely-varied match-ups, at times against newcomers to the game, or those that had chosen to invest their entire 48-hour weekend into the new Mario Tennis title. The final game better have an option to choose between ranked and unranked, and accordingly hand out points. Otherwise, it’ll be unfair and annoying.

Nintendo's network seemed to hold up well during our playtime across the weekend, with lag rarely affecting our games. Though Aces doesn't allow you to narrow player search by region, it does show signal strength before (and during) the game, allowing you to decline the match-up prior to start rather than face a disconnection during play. And there seems to be a lot of interest in Aces if the demo is any indicator, given we found match-ups within a minute every time.

In terms of visual aesthetics, Mario Tennis Aces has the ultra-colourful look of Mario games. While the court colour depends on what surface you're playing on – the demo only had blue hard courts, but the launch version will have grass, clay, desert, forest, and snow in addition to airship, haunted house, and hexagonal tiles – the surroundings take after the dominant colours of the chosen characters. That means a whole lot of red for Mario, pink for Peach, and so forth.

Each character also has its own type of play. For example, Mario is an all-rounder, Peach is technical, Bowser is powerful, Toad is speedy, Waluigi is defensive, and Rosalina is tricky. Who suits your game best will depend on whether you choose to complement your play style, or compensate for your deficiencies. Each character also has a unique animation designed around their characteristics, which is shown when the Special Shot is activated.

From the time we spent with it, it's clear that Mario Tennis Aces is a well-designed title, whose surface children's appeal hides hard-to-master gameplay. Plus, the release version of Aces will have a lot more content to offer laterally, thanks to a story mode in 'Adventure Mode' that'll bring missions and boss battles, and a tennis-only versus CPU tournament. We can't wait to practice our skills and challenge our friends when the Mario Tennis franchise arrives on the hot-selling Switch in a few weeks.

Mario Tennis Aces will be available June 22 on the Nintendo Switch.