Racing games are in an interesting spot right now. Hardcore driving enthusiasts get their fix through games such as Forza Motorsport, Gran Turismo, and Assetto Corsa, while those who don’t care as much about an authentic driving experience can play awesome games such as Forza Horizon 3 or even mobile games such as Asphalt 8. It’s easy to assume that it’d be hard to carve a niche that appeals to everyone in this scenario. However, that’s just what Nintendo does best and has done so once again with Mario Kart 8 Deluxe.

Mario Kart 8 Deluxe is a unique racing game in so many ways. Most video game developers would want to make games that are easy to pick up and hard to master. Mario Kart 8 Deluxe, available on the Nintendo Switch, is on the extreme end of both these things. It’s so easy to pick up that even kids with no real gaming experience can play these and at the same time, it’s still hard to master even for experienced players. Basic controls are simple - press A to accelerate and B to brake, while using the left stick to steer. As you pick up skills, you’ll learn that you need to press R to drift while turning. This gives you a speed boost if you get it right - and that takes some practice. You can also press ZR to jump when you hit a ramp and that leads to your characters doing cool stunts while in the air.

So why would this game appeal to anyone who already plays a bunch of other racing games? First of all, you get to race as Nintendo characters such as King Boo, Wario, or Baby Mario — and all of these look great. Each character has a set of unique animations while jumping and after they finish a race. King Boo, a ghost, looks really cool as he floats over a scooter with his hands barely touching the handle. Similarly, Inkling Girl looks great when she’s zipping across tracks performing mid-air stunts.

Mario Kart 8 Deluxe's New Characters - What You Need to Know

Secondly, Nintendo is excellent at designing racetracks. You only have to try racing on The Legend of Zelda themed Hyrule Circuit or Neo Bowser City to experience this. In Hyrule Circuit there’s one place where the Master Sword from the Zelda series lights up as you pass by - one of the most gorgeous elements in a racetrack. There are floating racetracks where you can see an entire city below with a slightly blurry bokeh effect. 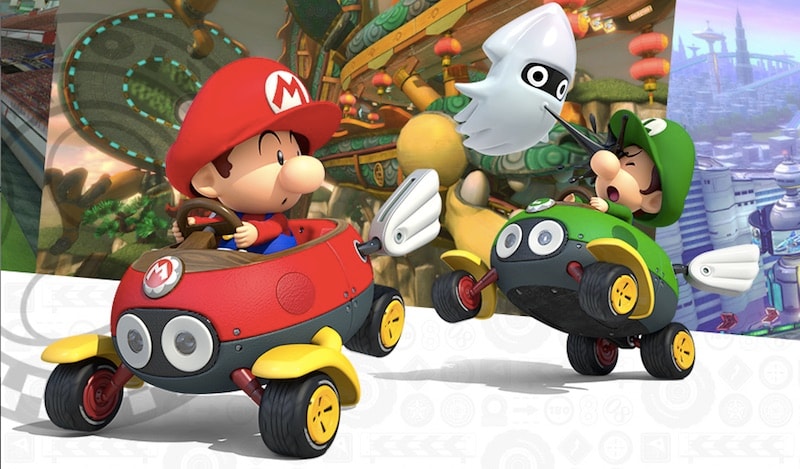 The shape of coins also changes in several tracks - from standard gold coins in some tracks, to green Rupees in Hyrule Circuit. The attention to detail in each track is stunning. The eclectic mix of tracks is so good-looking that we often felt like simply standing still and appreciating the effort track designers put into each course.

And then, there’s offline local multiplayer that allows you to play with your friends. It is perhaps the best way to play Mario Kart 8 Deluxe. It works great even if your friend is great at driving and you are not, because you can always enable Smart Steering and Auto Accelerate, which keep your kart from veering off-course and even the odds.

If, in spite of that, you find yourselves losing, just collect the power-ups along the way. Grab the pickup and Mario Kart 8 Deluxe will randomly assign a power-up to you with a slot-machine like animation on the top-left of the screen.

If you’re dead last, the game gives you some of the best speed boost power-ups available such as Bullet Bill, which turns you into an ultra high-speed missile charging up the track. If you’re second or third and chasing your friend for the trophy, you get shell power-ups that allow you to stop other players in their tracks.

This is a great balance mechanic that makes players with little or no skill feel highly involved in the game, and that is Mario Kart 8 Deluxe’s greatest strength. We played local multiplayer with a highly skilled player and ended up with an equal number of victories and defeats. There’s also a new Battle Mode that pits you against AI or other players, and the aim is to hit or catch as many players as possible, depending on the variant of the mode you choose. This mode was a lot of fun to play in multiplayer, but not as enjoyable when playing against AI. Throw in the variety of courses available even in Battle Mode, and you’ll start seeing just how many hours of gaming you can immerse yourself in.

The main racing modes are Grand Prix, Time Trial, and VS Race. Grand Prix has four tracks per cup, and if you win, you get a gold trophy. Time Trial lets you set fast lap times, and VS Race is where you race against your friends locally. These modes were a part of Mario Kart 8 on the Wii U as well, and they look gorgeous on the big screen when you connect the Nintendo Switch to a TV. We didn’t enjoy playing these as much in handheld mode, and we think the visuals are much better on the big screen.

Mario Kart 8 Deluxe Nintendo Switch: Everything Else You Need to Know

You can race on cars, buggies, or bikes, and each of these vehicles affects how your race goes. Bikes and light class characters such as Baby Luigi are better suited to courses that have sharp turns, and you’d want to choose cars for traditional race tracks. The difficulty curve rises quite a lot once you progress from 150 cc to 200 cc races. Only experts will be able to win races at 200 cc. By now, it’s clear that Mario Kart 8 Deluxe is a fantastic game for everyone. However, the one problem with this game is its online multiplayer mode.

We had a lot of connection issues in this mode. Many times we just couldn’t get this mode started in spite of being on a fast Internet connection. When we did get in, we were thrown out in the middle of a race due to a “communication error”. Nintendo needs to fix these teething issues before it starts charging people for playing online, which is expected to start from later this year. 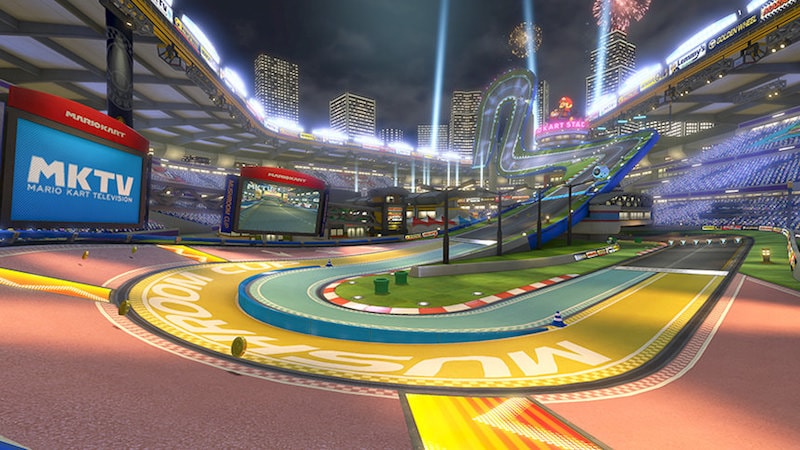 We also didn’t like racing with the Joy-Cons both in handheld mode and when the controllers where attached to the grip. If you don’t enable auto-accelerate, pressing A constantly for acceleration left a red mark on our thumb. Nintendo’s Pro controller is much better for this game, and we didn’t face any discomfort while using that.

Online mode aside, Mario Kart 8 Deluxe is yet another fantastic first-party title from Nintendo. It adds several refinements, new modes, characters, and racetracks to an already awesome game. Everyone from kids to senior citizens can play this game and have fun, and skilled players will require a lot of practice to master it. If you asked us to recommend one Switch game to anyone and everyone, our answer would be Mario Kart 8 Deluxe. It’s a shame that the Nintendo Switch isn’t officially available in India and several other markets but if it were, this game would be enough of a reason to buy the console.

We played a retail copy of Mario Kart 8 Deluxe on the Nintendo Switch. The game is available exclusively on Nintendo Switch at roughly Rs. 4,000 in the grey market ($60 officially in the US).

We discuss Mario Kart 8 Deluxe on this week’s episode of Transition. you can subscribe to it via iTunes or RSS or just listen to this episode by hitting the play button below.

product Nintendo has delivered a wonderful experience for beginners and advanced players with Mario Kart 8 Deluxe. 4.5 out of 5 stars