Life is Strange: Before the Storm Episode 1 'Awake' Review

The first time I saw Rachel Amber in Life is Strange: Before the Storm, there was a tinge of sadness. It wasn’t because of the moment – the new protagonist Chloe Price was enjoying herself at a punk-rock concert in an old rickety abandoned mill, for a fictional band called Firewalk (another reference to the video game series’ inspiration, Twin Peaks) – but rather owing to what I knew about her from the original Life is Strange, an episodic adventure game released in 2015 that merged time travel with teenage drama.

Back then, Rachel was Chloe’s best friend, who had disappeared under mysterious circumstances, and whose fate slowly became clear over the course of the five-episode story. As Max Caulfield, the photography enthusiast star, you learnt how important Rachel had been in Chloe’s life, more so with her childhood friend – Max – moving away. And so, when Chloe and Max finally figured out Rachel’s fate in episode 4, it was a heart-wrenching moment.

Seeing Rachel in the flesh for the first time – Before the Storm is a prequel story, set three years before the events of its predecessor – brought those feelings back to the surface. But at the same time, getting the chance to spend time with her and seeing how the two – Chloe and Rachel – developed such a tight relationship is endearing. It’s what makes this three-part new addition, the first of which became available on Friday, bittersweet from the beginning. Suffice it to say, if you dive into Before the Storm without playing the previous game, then the emotional impact and meaning of these scenes are lost, making the five-part Life is Strange a mandatory playthrough.

Titled ‘Awake’, the first episode of Before the Storm begins with the rebellious Chloe brushing with danger on the train tracks. Soon, you’re on your way towards the aforementioned mill to see the band perform, but the club bouncer is smart enough to see through your fake ID. Chloe doesn’t have Max’s rewind-time ability – who only appears via pictures and text messages here – that powered Life is Strange’s moments of high drama, and she has to instead rely on her ability to be cheeky to get what she wants.

In the game, it’s called “Backtalk” – the game’s new developer, Deck Nine, is American after all – which appears as a blue-coloured text box with grawlixes in them, next to the options in your dialogue tree during conversations. Once you select it, it triggers a mini-game of sorts, where you’ve limited time to choose from successive responses to fully aggravate the person on the other end. Get all of them right, and they will be frustrated and give in. But while that might give you a win in the short-term, it can also lead to undesired negative effects.

Meanwhile, Max’s love of photography – which served as optional achievements over the course of Life is Strange – has been replaced by Chloe’s love of vandalism. During the story, you’ll get the chance to create or add to graffiti in all sorts of avenues, including a dusty RV, the back of a school-board, or the poster for a stage performance. Sure, they are a way of getting you to cross Easter Egg-type checkboxes (it’s also why there’s a Collector Mode for players who missed any), but they also offer another peek into Chloe’s personality and wit.

You can pick from two choices on every occasion, placing you in control of Chloe’s reaction to each new graffiti situation. It’ll likely say more about you than it does of the character, though that’s exactly why narrative-driven graphic adventure titles foster such strong connections between the player and its cast, since they put you directly in charge of the protagonist, making the fictional decisions you take feel as real as your own life. 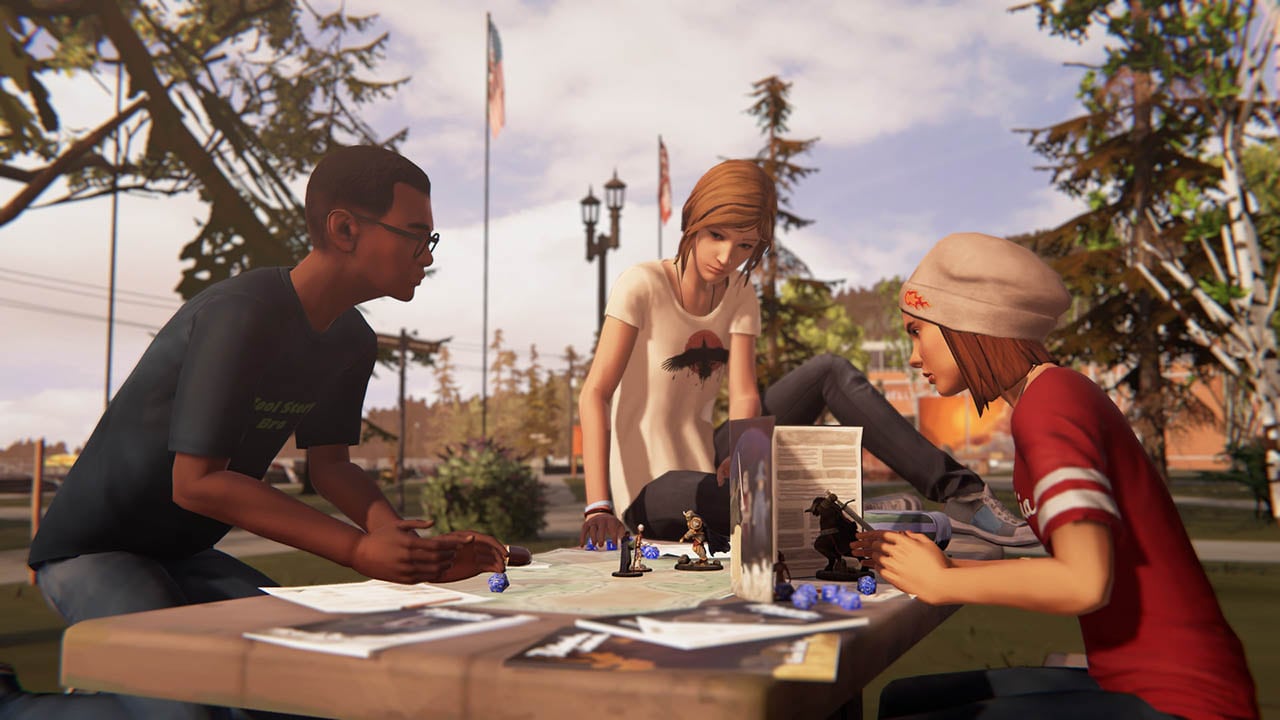 The branching story, at least on a micro level, further adds to that sense of realism. Before the Storm continues the ethos of Life is Strange, with the way you behave – or choose not to behave – not just affecting your friendships or the way people see you, but also how they communicate, and what they talk about. While the longer story arc is linear, just like the original, the prequel retains the open-ended exploration aspect if you’re willing to investigate and poke around, which can help you unlock new dialogue options and push the conversation in a direction you prefer.

Even the conversations themselves are optional sometimes, so you might easily end up walking past someone without knowing if there was an interaction to be had. Plus, even when you do interact with main quests – an early task involves Chloe picking up the Blade Runner director’s cut DVD from a friend – the length of your exchange is entirely up to you. You could walk away the minute you get what you want, or you can choose to say, play a Dungeons & Dragons game, that will help build new relationships.

The most important part of what is essentially an interactive TV show – each episode is a couple of hours in length, and would fit a 40-minute drama – is the writing. Fans of the original were wary after Square Enix confirmed the game at E3 this year from a new developer (Deck Nine) instead of the Paris-based Dontnod, which had crafted the setting of Arcadia Bay – a fictional town in the US Pacific Northwest – and an ensemble of relatable characters, with a suite of flaws, vulnerabilities, and motives.

Those fears were further augmented when fans found out that the voice cast had been mostly, if not entirely, replaced. Rhianna DeVries took over from Ashly Burch (Aloy in Horizon: Zero Dawn) for the role of Chloe, while Bootsie Park now voices her mother Joyce instead of Cissy Jones (Delilah in Firewatch). Thankfully, Before the Storm holds its own on both fronts. 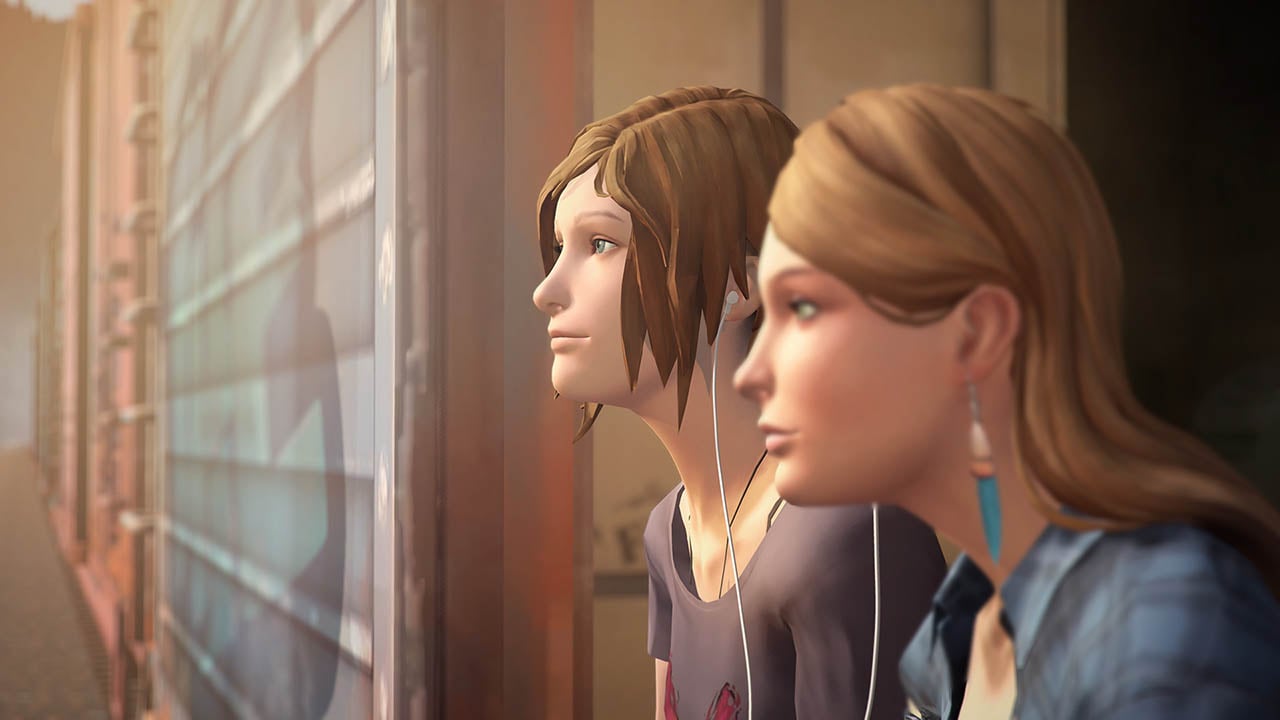 The first episode hits several emotional beats fleshing out Chloe, giving you a chance to understand the frustrated, rebellious 19-year-old whom you met in 2015's Life is Strange as Max, who has been deeply affected by the death of her father. And thanks to Dontnod’s important work in keeping both protagonists as female, the prequel’s writers – of which Burch was a part – can push the queer angle further in the new story. Rachel is a fascinating, enigmatic character and it’s her budding relationship with Chloe that powers the game so well.

At the same time, there’s an extremely thin line when it comes to wording teenage angst on the screen. Push it too much and you end up being sappy, or risk turning into a parody of yourself. Barring a few missteps, Before the Storm handles it quite well during its opening hours, though whether it’ll continue to maintain that delicate balance or effectively call-back to its bigger themes over its entire length remains to be seen.

One of the biggest complaints with Life is Strange was the poor lip-syncing in earlier episodes, which is crucial in complementing the performance of voice actors. Deck Nine has clearly been more aware of that from the start, and it helps sell the idea that these fictional characters are flesh and blood, and not just pixels on your screen. The graphics still have the low-detail-level of the original though, so the engine change – from Unreal 3 to Unity – is clearly just a technical decision.

Besides that, there is just one big gameplay change, which only applies to keyboard and mouse players. In Life is Strange, you interacted with things in your environment by pointing and holding down the mouse, and then dragging it to the action of choice. With Before the Storm, the latter bit is controlled by your direction keys (WASD), which brings the process slightly more in line with the controller experience.

Deck Nine continues the legacy of Dontnod with the dreamy enchanting music, working with British indie folk band Daughter to craft a soundtrack that fits the new protagonist, with more electric guitar and drums instead of the melancholic piano. Life is Strange: Before the Storm shows that it understands what pulled people into the nostalgia-fuelled Arcadia Bay, and creates an emotionally-charged intriguing opening chapter to a story that we’ll be keeping an eye on.

Further reading: Life is Strange, Life is Strange Before the Storm, Deck Nine, Square Enix
Akhil Arora Email Akhil Akhil Arora covers entertainment for Gadgets 360, interviewing stars such as Christian Bale and Anurag Kashyap, covering series premieres, product and service launches across the globe, and looking at American blockbusters and Indian dramas from a global socio-political and feminist perspective. As a Rotten Tomatoes-certified film critic, Akhil has reviewed over 150 movies and TV shows in over half a decade at Gadgets 360. When he is not completely caught up with new film and TV releases, Akhil ...More
Ather Energy CEO on What's Needed to Make India a Fully Electric Vehicle Nation by 2030
Apple Refusal to Approve India Spam App Antagonises Regulator

product The prequel to the much-loved original puts you in the shoes of Chloe Price, as you begin an unlikely friendship with Rachel Amber. 4 out of 5 stars

Life is Strange: Before the Storm Episode 1 'Awake' Review
Comment