Lara Croft and the Temple of Osiris Review: Bring Your Friends

Through the years we've seen the Tomb Raider series take many turns. From its pixellated debut on the PlayStation One and PC to the gritty reboot that graced the PC, PlayStation 3 and Xbox 360 last year, series heroine Lara Croft has had as many makeovers as Madonna, if not more. So much so, that her latest outing doesn't even have the term "Tomb Raider" in the title. Rather, it's called Lara Croft and the Temple Of Osiris. It's the second in a series of spin-offs that began with the highly successful Lara Croft and the Guardian of Light in 2010. Unlike the Tomb Raider titles, these Lara Croft games are played in a top-down perspective that is similar to games like Diablo. Signature elements of puzzle solving and running and gunning ancient foes remain, with the addition of multiplayer on the same console, and the result is a game that's much more arcade-like in its sensibilities. In 2010, this was a much needed change, and Guardian of Light jumpstarted the Tomb Raider franchise's return to glory, after years of increasingly bad games.

Temple of Osiris doesn't take too long to get you started. Unlike a lot of games that start off with a wealth of exposition, you'll find yourself from the game's opening menu screen to avoiding a rather angry crocodile god-slash-monster in a matter of moments. Lara Croft and her tomb raiding rival, Carter Bell find themselves working together along with two Egyptian Gods, Horus and Isis in an attempt to piece together Osiris, a god who was dismembered by Set, his brother. While it's light on the story, there's just enough of it to keep you hooked.

Along the way you'll visit ancient crypts, solve a host of puzzles, and gun down your fair share of baddies. The last of which employs a method similar to Geometry Wars and other twin-stick shooters. Simply use the left analogue stick to move, and the right stick to aim and fire. It works well with the game's top-down perspective and the camera keeps you in focus, without getting stuck behind walls and tight corners. There's a sense of weight and heft to the game's many weapons that range from an ancient staff that fires lasers to a rocket launcher. From the subtle delay between switching weapons to the pause when reloading weapons in your arsenal, Temple of Osiris, it adds a sense of deliberation that makes each shot feel impactful. It's a welcome, yet subtle addition that makes defeating the game's many scarabs, zombies, and other assorted disposable cannon fodder a satisfying experience. 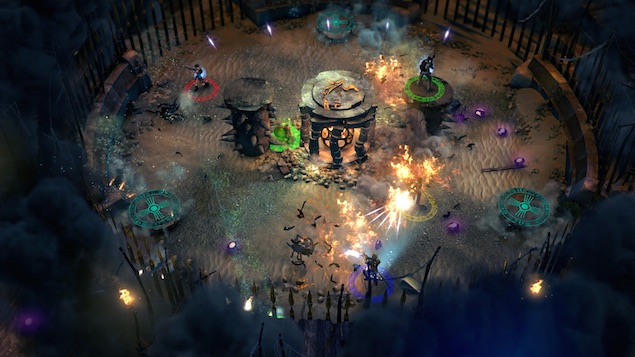 While the action in Temple of Osiris is very satisfying, there's more to the game than just running and funning. You'll solve more than enough puzzles too, as you progress through the game's many tombs. From simply shifting explosive balls from one area to another to blow up walls, to stunning a gigantic snake boss by using mirrors and lasers, the use of puzzles is a welcome change from the usual mindless killing of monstrous hordes that most other games adopt.

Temple of Osiris remains fresh over the course of the game because each area introduces you to new tools and powers at a steady pace, from using a torch to light braziers, to introducing the staff of Osiris that allows you to raise platforms and slow down time. In terms of presentation, it's serviceable. Temple of Osiris, like Guardian of Light, is meant to be a small downloadable game that you can pick up and play quickly - the previous game has even been released for iPhones and iPads, though we'd recommend skipping it unless you have an MFi game controller. That means that it isn't as graphically taxing or visually appealing as most games we've played this year but that doesn't make it any less fun.

What makes the Temple of Osiris brilliant though is playing it with friends. Today, most games only support online multiplayer gaming, through services like Steam, PlayStation Network and Xbox Live. Temple of Osiris however lets you play with three other friends in the same room - and this makes it an infinitely better experience. With a slew of chase segments that have you avoiding monsters and traps, the sheer amusement earned on seeing your friends fall to their doom whilst making a jump from one crumbling platform to the next is priceless. 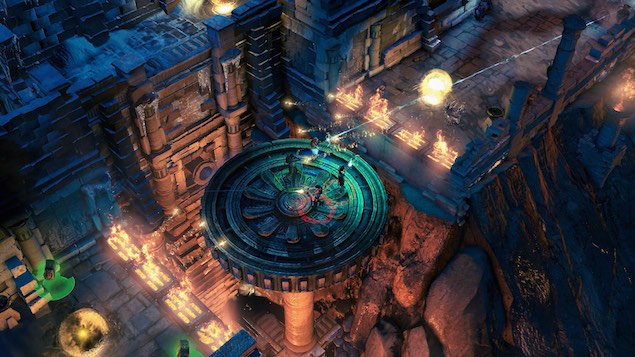 Playing with friends online is still a lot more fun than having a go at it alone, and the game's difficulty scales depending on the number of people playing together, so you'll never find it too easy. One thing that the game does really well is adjust its mechanics for multiple players. Puzzles require coordination and teamwork to solve; grappling hooks used to scale its many structures also let you create tightropes for your friends to traipse over. Magic spells that let you create a bubble around you act also as platforms for your comrades to jump on. There are workarounds for all this when playing solo, but the game really makes you feel like a team, and not just people who are looting through the tombs at the same time.

Speaking of loot, Temple of Osiris has a whole lot of it. These range from gems that let you open the game's many treasure chests, to power-ups that let your gunshots spread across a wider area. There is a wide range of these powerups throughout the game, but they don't feel as useful as they should. Throughout the game's short journey, you'll never feel compelled to equip the many baubles and knick-knacks you gain, because its difficulty is gentle at best. That's also partly the reason for the game's short duration. Clocking in at around five hours, Temple of Osiris isn't the longest game. And while it's a well-paced romp, there's very little reason to come back to it again once you've finished it. 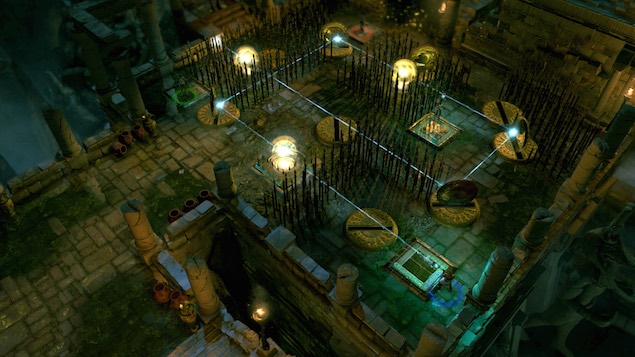 On the whole, Lara Croft and the Temple of Osiris is a solid experience that's almost worth the price of entry. Retailing at $20 (around Rs. 1,300) on Steam and sporting a similar price on Xbox Live and PlayStation Network, you're probably better off waiting for a sale before picking it up. It might not have the looks of the 2013 reboot had or its deep narrative, but it's an enjoyable little side story that should quench your thirst for raiding tombs until Lara Croft's next main adventure, Rise of the Tomb Raider later next year.