Announced at E3 2018, action-adventure game Just Cause 4 for PS4, Xbox One, and Windows PC puts you back in the role of series protagonist Rico Rodriguez. In Just Cause 4, you'll glide, grapple, and parachute your way across the exotic fictional country of Solis to liberate it from the grips of an ironclad dictatorship. Sounds familiar? That's because it is. Despite every game in the Just Cause series sporting the same premise, Just Cause 4 is perhaps the most bombastic expression of it.

Like past entries, Just Cause 4 has you aiding a local resistance to take down an oppressive ruler, though unlike its predecessors, it manages to keep things interesting. You'll reduce army bases to rubble, partake in elaborate chase sequences right out of 80s action movies, and sail right into the eye of a manmade storm. Just Cause 4's missions are a varied lot. Be it those that tie-in to the main story, or others that exist simply to give you new grapple hook modifications to play with, there's enough variety to keep you going.

And while half the fun is in its entertaining missions, the other half is in some new gameplay mechanics. Previous games had you using a grapple hook to latch onto surfaces, take down enemy soldiers, or simply tether explosive barrels together. This time around Just Cause 4 lets you use your grapple hook to attach balloons, rockets, and retractors to any in-game object. You can attach balloons to the top of a jeep, tank, or even an explosive barrel while putting rockets on the side and coupling it with a satellite dish using retractors to create a colossal flaming wreck in the middle of a firefight. These options give you new ways to complete objectives and add a welcome element of creativity to the proceedings.

Aside from a heady mix of missions and new gameplay mechanics, there's the traversal. You can switch between using a wing suit to glide across the game world, grapple objects allowing you to leap forward, or simply use a parachute to hover towards your destination. 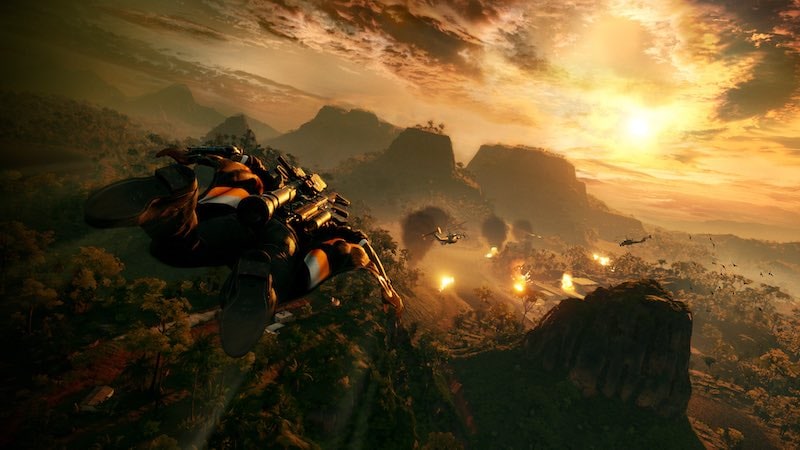 At first, swapping between different traversal options on the fly isn't as seamless or intuitive as Spider-Man PS4 or Sunset Overdrive thanks to the number of button presses needed to initiate them, but once you're used to it, traipsing across Solis is second nature while a new AR scanner that seems to be cribbed from Assassin's Creed makes it easy to find missions and challenges around you.

And speaking of Solis, it's perhaps the most diverse game world in the Just Cause series to date with areas ranging from snowy mountain bases, sunny urban city centres, dense jungles, and deserts. Each sport unique enemy types and challenges deal that keeps the action varied.

Where Just Cause 4 does falter however, is with its cut-scenes. Ever so often missions would be punctuated with moments between characters giving you a hint of what to expect next. These are bookended with loading screens which ruin the experience. The only loading screen you'll see outside of these interruptions is a short one when you boot up the game. Although Just Cause 4's cut-scenes go a long way in making its events feel cohesive, their execution is jarring at best.

Perhaps one of the biggest points of concern surrounding Just Cause 4 is how it plays. With Just Cause 3, publisher Square Enix forced you to sign-in to its services just so you can get access to its leaderboards. This would tank the game's frame rate and performance, forcing you to play offline. In Just Cause 4, Square Enix still tries to sign you in (complete with a GDPR clause because it's 2018), though there's no performance penalty this time around.

This caveat aside, Just Cause 4's performance is not too shabby. The visuals are fantastic with well-detailed characters and environments. Playing it on a laptop with an Intel Core i7-7700HQ processor (2.8GHz), an Nvidia GTX 1060, 128GB SSD, and 16GB RAM, Just Cause 4's frame rate stayed between 35 to 40fps in the most demanding of scenarios with all settings maxed out at 1080p. The keyboard and mouse controls for it work fine though a controller feels more natural for this kind of game.

In spite of trotting out a premise that's been done to death, Just Cause 4 remains fresh thanks to its creative gameplay features and varied missions. With explosions aplenty and stunning visuals, there's little amiss with this over the top entry in the series.

product Just Cause 4 for PS4, Xbox One, and Windows PC is out this week. Here's what you need to know before you buy it in our Just Cause 4 review.