The exploding barrel is a well-worn video game trope. Ever since we first saw these in Doom, these have been a handy way to clear rooms full of enemies with a single shot, as the resulting detonation eliminates them en masse. But what happens when an entire game world is filled to the brim with exploding barrels? The game ends up being Just Cause 3.

Taking place in the fictional island country of Medici, Just Cause 3's irreverent tone, cheesy dialogue, and goofball plot are all reminiscent of older action games and movies. It's highly derivative but enjoyable all the same. In Just Cause 3, you set the world ablaze as former special agent Rico Rodriguez, hellbent on freeing Medici from the iron grip of dictator Sebastiano Di Ravello.

With this comes the opportunity to run amok. The exploding barrel trope takes the form of transformers, satellites, and obviously, fuel tanks - almost every thing in Just Cause 3 can be destroyed in a chaotic haze of fire and smoke. 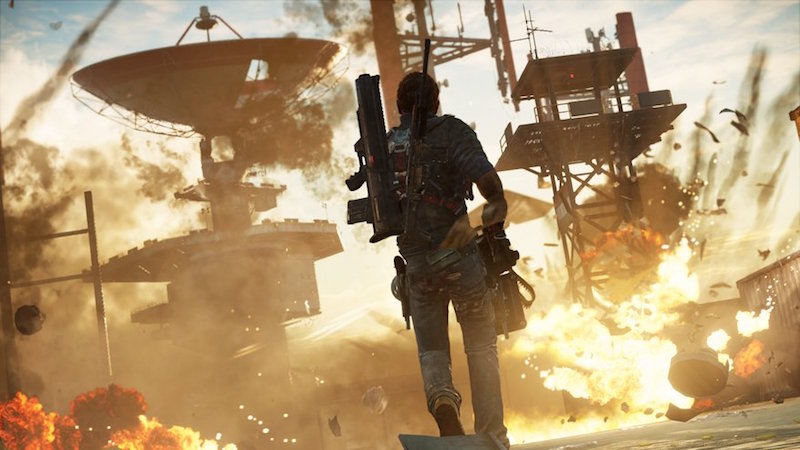 (Also see: Just Cause 3 Has More Explosions Than a Michael Bay Movie)

To make it easier to spread chaos, these exploding structures are coloured in white and red, making them stand out in all the different areas of the game. Borrowing from Mediterranean regions, Medici is replete with sunny beaches, fields filled with sunflowers, and some of the nicest looking video game water we've seen this year. It's perhaps one of the most gorgeous game worlds to wage a one man war against an authoritarian regime. Flora and fauna aside, the cities of Medici provide an ample challenge. The game's many traversal mechanics come in handy for taking down Di Ravello's statues, laying waste to his commanders, taking back police stations, or disabling monitoring installations to free its many towns.

In terms of getting from one location to another, there are a host of options available. Standard open-world transport such as cars, motorcycles, helicopters, boats, and later, planes are present and for most part, handle well enough. Our only grouse was that the cars don't handle as well as they should, and colliding into a tree at under 60 kilometres per hour had us ricocheting off it like a bumpercar. The game's less conventional choices, such as the grappling hook, parachute, and wing suit are a whole lot more entertaining to use. Using all three of them in conjunction had us move swiftly from one area to another with barely any fuss. They also came in handy when trying to destroy some of Just Cause 3's bigger military bases.

While the many civilian vistas of Just Cause 3 add variety, its military bases are where most of the fun is to be had. From small outposts to gigantic sprawling command centres occupying entire islands and ports, they're laden with all sorts of objects to destroy. From the aforementioned fuel tanks to radar antennae hidden underground, there's a ton to uncover and blow up. Along the way, the game throws a slew of disposable soldiers, helicopters, and even battleships to even the odds. These sections of the game provide the right balance of challenge and large, booming explosions as the pay-off for a job well done. 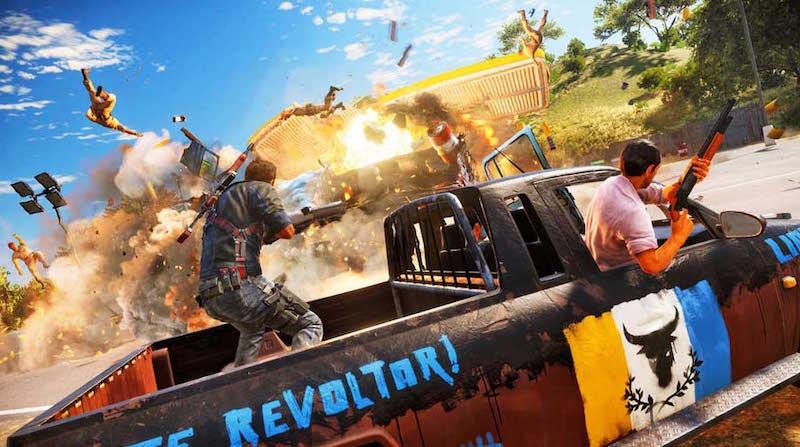 Through it all, the controls hold up quite well. With the action taking place in third person, they're not the usual gun and take cover fare we've been subject to in games like Gears of War and Uncharted. Rather, it harks back to a simpler time with an emphasis on running and gunning. It results in more arcadey, satisfying gunplay that allows you to focus on increasing bodycount, destruction, and little else. And when there are no bullets, tethering explosive crates to structures or using the grappling hook to kick foes ensures the pandemonium never stops.

It's obvious that Just Cause 3 is at its best when it allows absolute freedom and it does with such regularity that any single moment that serves to constrain our wanton streak of mayhem sticks out like a sore thumb. Though they're few and far between, they arise during the game's single-player missions. These involved getting to a destination within a stipulated time frame (or be greeted with a game over screen and forcing a retry) and escort missions to protect game's characters from damage. It's during these moments where the game's cracks begin to show. That's because at least on the PS4, Just Cause 3 is replete with loading screens.

There's an initial loading screen when you fire up the game, one when you start a mission, another after the cutscene of the mission, and one more on dying or restart a mission. While the first loading screen as you boot up the game is long, the loading time post-death is longer. From our experience, it clocks in at around three minutes. This is after the game's day one patch. 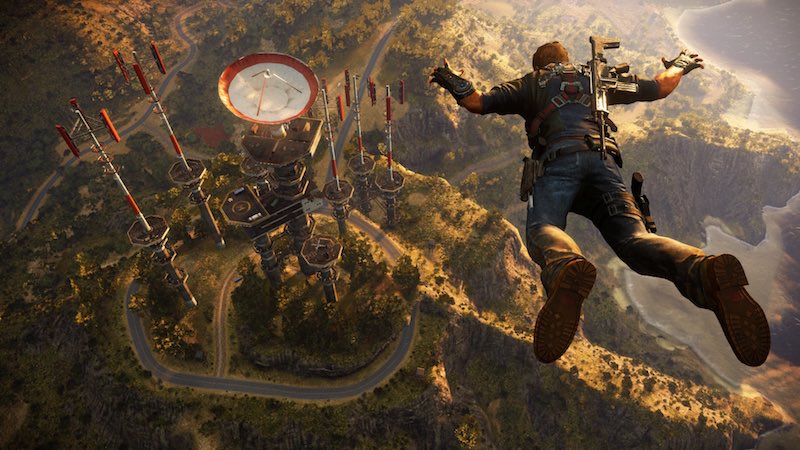 (Also see: Gamescom 2015 Was All About Power to the Players. Here's Why)

And though we're happy to report that the patch rectifies most of the game breaking bugs we touched upon in our impressions piece, it's not anywhere close to what it should be right now. Rico does tend to get stuck in walls on occasion, and when coupled with bugs, the aggressive enemy battalions and missile launching helicopters forced us to tolerate Just Cause 3's loading screens longer than what can be considered reasonable.

Furthermore, the game's frame rate is erratic. It manages to hold up in moments of absolute madness, albeit just. Oddly though, it takes a very visible tumble at times when we're simply driving across the countryside. Perhaps the biggest offender is the game's online component. Yes, you can play Just Cause 3 online, but no, not in multiplayer. Instead you'll compete with others in a gigantic leaderboard for a host of challenges such as using the grappling hook to travel the furthest or staying in the air with the wing suit for the longest time.

At this stage, its implementation is such that the game will try going online the moment you check out its menus even if you have started the game offline. And if you begin the game online and PSN goes down (as it did during Black Friday sales), the game will pause and try reconnecting immediately even if you're in the middle of a cutscene. 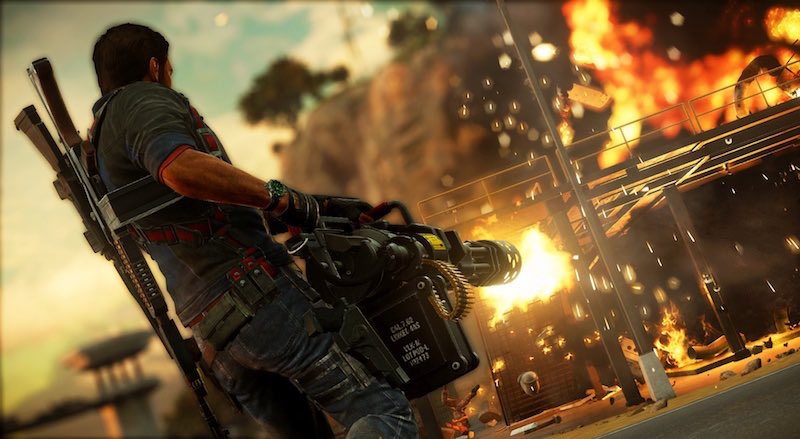 In our experience, the best way to play Just Cause 3 was with the Wi-Fi mode on the PS4 disabled and the Ethernet cable unplugged. We're unsure if the PC version is subject to the same concerns but on the PS4 (and the Xbox One, which fares worse according to some reports) it's not the best experience. One could argue that an update or two could alleviate matters but it's not anywhere close to what it should be at launch.

In a game wherein so much rests on smooth technical performance, Just Cause 3 feels like it could have used more time in development. It's an enjoyable romp bogged down by these issues. If you have higher than normal tolerance for long loading times, intrusive online connectivity, and erratic frame rate, you'll find Just Cause 3 worth its day one price tag. For the rest of us, waiting until there's clarity on these problems is advised.