Hue Is an Excellent Indie Puzzle Game You Must Play

It's rare that we find ourselves excited when we hear about puzzle games or platformers these days. Usually we pick these up with no expectations, because there are just too many of them for any new game to feel fresh. That is why Fiddlesticks' puzzle adventure game Hue left us surprised.

In Hue, you can change the colour of the world to solve puzzles. All characters except the titular Hue, who you play as, see the world in greyscale, and as you progress, you unlock colours one by one. Remember VVVVVV? We loved that game because it let you manipulate gravity and it was implemented really well. When playing Hue, we found ourselves surprised by how well the colour-changing mechanics were implemented. Hue is more of a puzzle game than a platformer, but it has elements of both.

The best thing about the game is that it has a really intriguing story. Hue's mother has left him letters strewn across levels and as you find them, you find out more about where Hue's mother could be. The quest to find Hue's mother lends purpose to solving puzzles and the story's woven in very well with the puzzles.

Hue starts in black-and-white, in a village with few people. Even at this stage we found the art striking. The game has no explainers or tutorials telling you what to do. You just start moving around, talk to characters, and figure out what to do in the game. This makes you discover things on your own rather than looking for things you've been told to find. It's a nice touch that works well in Hue. 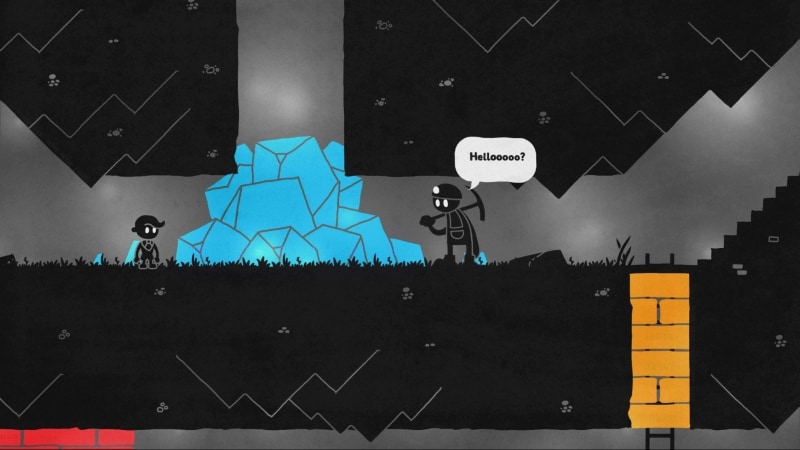 Puzzle design is another thing that really stands out. Change the background colour and you can walk through obstacles. If you see a red laser beam, just change background colour to red and it turns harmless. Similarly you can walk through walls, and crates. Sometimes you'll have to do the reverse - change background colour to something other than the colour of a platform. If you change it to the same colour, the platform disappears and Hue falls to his death. There are levels where both these mechanics are needed and those are some of the game's most memorable puzzles.

When you unlock more colours and solve puzzles, you progress to the next location. Sometimes going to a new location adds a way to solve puzzles, like changing the colour of crates. Hue doesn't give any hints here. You just try everything you can and stumble upon this puzzle mechanic. That is just one of the many “aha” moments we had while playing this game.

There are puzzles that make you change colours multiple times to jump up and across to the next platform. We encountered one such “tower climb” puzzle initially when we had unlocked three colours. We were expecting a similar, much tougher puzzle with all eight colours later, but it never arrived. That is because puzzles don't tend to repeat in Hue. While some puzzles are a bit similar, most feel fresh and present a different kind of challenge. This keeps the game from feeling stale.

The controls are intuitive too. We played the game on an Xbox One and found it to be a joy to use the controller. The right analogue stick lets you change colour. It has a tiny dot showing you which colour you've selected. The game also highlights that colour by making it larger. This makes it easy to select the right colour. The left stick or D-pad can be used for movement and you tap X to pull/ push and the A button to jump. We never had any issue with controls and rarely even hit the wrong button. We've played a few platformers where the controls feel a bit too unforgiving, where the margin of error is a bit too small, but Hue is not like them. It's generous enough for most people to play, with the difficulty stemming from the quality of puzzles rather than the reaction time afforded to you. 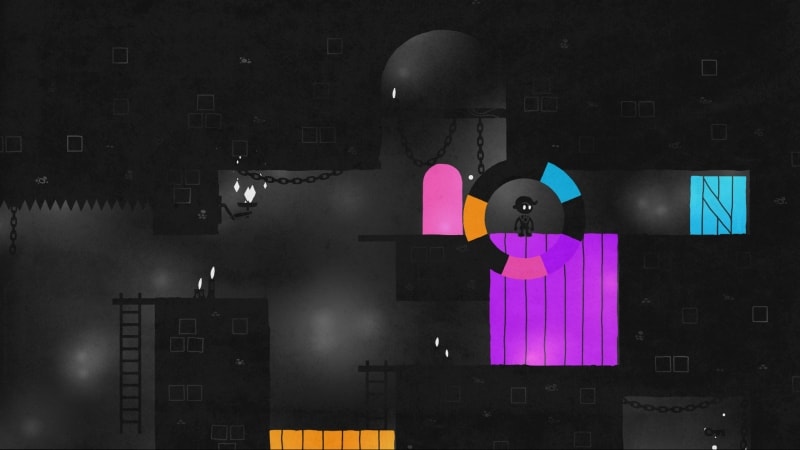 As we played the game we found that puzzles were becoming harder to solve. The last two locations have some of the best puzzles in the game. If you're looking for a cross between intelligently designed puzzles and a bit of a platformer challenge, Hue gets the balance just right.

Hue's soundtrack deserves praise too. From soothing, mellow tones to slightly peppy tracks, the mix of songs complements the game. Hue's mother's voiceover is another of the things we love about this game. The voice is soothing, and makes you want to discover her fate.

Hue has 28 collectibles or beakers as the game presents them as, strewn across various levels, which adds a bit of replay value to the game. We didn't find it an enticing enough prospect to go chasing after them. That is our only complaint with the game. Once you've solved puzzles there isn't enough incentive to return to any of them. It'll take most people at most a week to finish the game if you're playing for an hour or two every day. Once you're done, you most probably won't find yourself returning to levels to gather these beakers.

Overall, we were very impressed with Hue. It's a good example of how a fresh mechanic makes a puzzle/ platformer game great. We can wholeheartedly recommend this game, which is available on PS4, Xbox One, and PC, with a PS Vita release in September.

We played a review copy of Hue on Xbox One for this review. It's available on Xbox One, PS4 and PS Vita (combined purchase with Vita version unlocking in September) for Rs. 1,248, and for PC via Steam