Horizon Zero Dawn represents a rarity these days. You don’t often see big companies like Sony take a risk in developing a big budget console game that isn’t a sequel in an existing, successful franchise. Perhaps after five titles in the Killzone universe, developer Guerrilla Games was able to convince the company to try something a little different.

As we outlined in our first impressions, Horizon Zero Dawn takes place in what’s best described as a post-post apocalyptic future. Nature has reclaimed the earth with an abundance of flora and fauna, while giant robot dinosaurs roam the lands. Society has been reduced to a tribal state and that’s where the game’s protagonist, Aloy comes in.

Born an outcast, she finds herself quickly embroiled in a conspiracy that threatens humanity. There’s a personal stake in it too as it also serves as a vehicle for her to uncover her past. Of course, this means travelling across a world that can be best described as stunning.

As is the case with Guerrilla Games’ previous efforts, the production values are superlative. Horizon Zero Dawn’s environments are gorgeous. Over the course of the game you’ll travel from wide, sweeping grasslands to arid deserts to underground shelters, and the visual variety on display is astounding. It adds some motivation to progressing through the game’s many quests, not just to get through the plot, but to see what new areas await you. All of them have unique creatures to slay and missions to undertake.

Speaking of creatures, the robotic beasts of Horizon Zero Dawn are a sight to behold. From the T-Rex inspired Thunderjaw that requires a fair bit of thought and planning to overcome, to the gigantic Rockcrawler, a mechanical sandworm that wouldn’t be out of place in Dune, there’s a lot to keep you on your toes. The automatons of Horizon Zero Dawn are formidable foes, so if you’re not careful, you’ll find yourself dying often.

Thankfully, the combat system is accommodating. While most games distinguish between light and heavy attacks, Horizon Zero Dawn uses range as the parameter to distinguish between how you hit enemies. The bow and its variants such as the war bow, which lets you shoot elemental arrows to shock or freeze foes, and the tripcaster, which lets you set up traps, are crucial to your success. Sure, you can get close with your spear, but the lack of a targeting system to let you ‘lock on’ or single out your mark makes it an option best saved for landing the killing blow, or a contingency when you’re swamped with opponents on all sides. It’s a puzzling choice, but it does little to impact the moment to moment feel of combat. Felling humans or machines is enjoyable, with each blow having a sense of weight and impact. Be it laying traps or letting arrows fly, the combat in Horizon Zero Dawn is undeniably fun. Plus, it isn’t the only tool at your disposal. 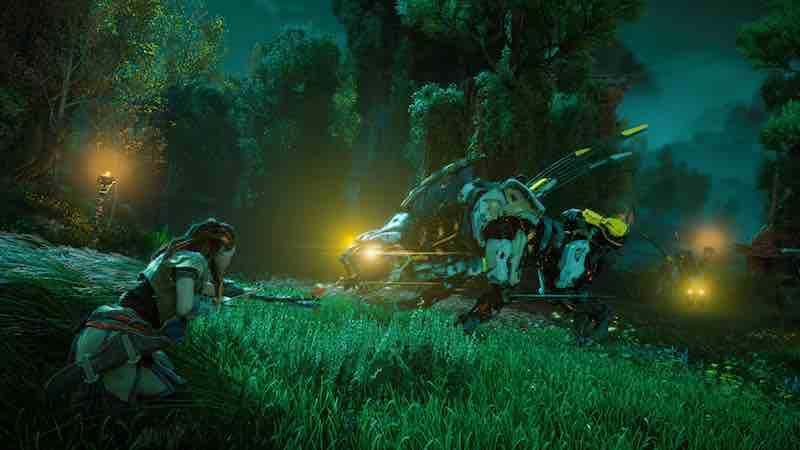 Taming the many beasts is possible and a valid strategy, adding another dimension to the combat, particularly in tougher battles. You can mount some of them while others will just assist you in a fight. You unlock the ability to ride different beasts. Peppered across the game world are Cauldrons — bunkers beneath the ground where these machines are made. Conquering them grants you access to a set of beasts to tame.

In addition to this, stealth is also viable for most part. Early on in Horizon Zero Dawn you get a device known as the Focus. It lets you map out enemy paths, allowing you to ambush or sidestep them completely. While we felt that it makes things a lot easier, it also strips the game of its challenge, and takes away from unlocking a host of abilities present in its well-rounded skill tree. You don’t get experience points for walking away undetected.

Like most role-playing games, finishing quests, killing monsters or bandits, and progressing through the story nets you experience points in Horizon Zero Dawn. However you don’t get anything for taking the pacifist route. So, if you’re looking to learn how to shoot three arrows at once, or simply to have more access to medicinal items, then you’ll need to get your hands dirty ever so often. This makes stealth more of a means to get an edge in combat, instead of a path to progress through the whole game.

Horizon Zero Dawn's approach to inventory management is equally subservient to combat. You have different satchels for different kinds of items. One for resources, one for ammo, one for weapons and so forth. They’re limited in capacity and need to be upgraded in order for you to carry more. A necessity given that you can craft an assortment of potions, arrows, and traps. Upgrading your satchels means finding the right item at the game’s many merchants, or more likely, exploring your surroundings and hunting down and killing beasts to max out what you can take with you. It’s not a bad thing mind you, but could be an annoyance if, like us, you’re burned out on Ubisoft’s style of inventory management in the Far Cry series. 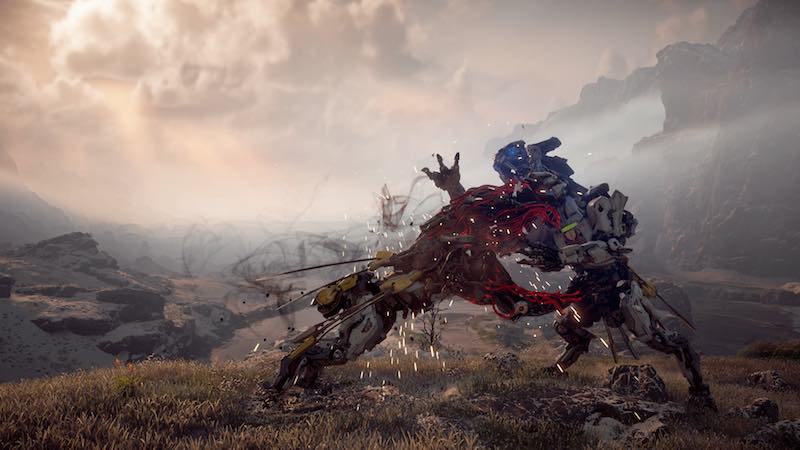 Furthermore, while the game’s main quests are by and large excellent, Horizon Zero Dawn's side-missions are far from that. Most of them have you fetching items for various non-playable characters (NPCs) and little else. Others, such as clearing an area full of hostile monsters are presented as tough tasks, in our case, requiring us to be 20 levels higher than what we were. We succeeded with ease. Much like Skyrim, you can make use of the game’s terrain and combat systems to damage them with no cause for concern. In this particular instance, we simply scaled a mountain overlooking our targets and spammed arrows till they were dead, allowing us to gain a handsome 18,000 experience points with little effort.

But these are nitpicks in the face of a solid game. The attention to detail is astounding. Most NPCs have unique personalities with their own backstories, such as a merchant ruing marriage, or a hunter whose greatest concern is if he smells of fish. These quirks make them a treat to talk to. The polish extends to their looks - they aren’t generic copy-paste 3D models. Rather, Horizon Zero Dawn brings you believable facial animations and convincing vocal performances. That’s not to say the main cast of characters isn't up to stuff - they’re just as wonderfully realised if not more so. If this is your first role-playing game, the interactions will probably spoil you - they’re that good. 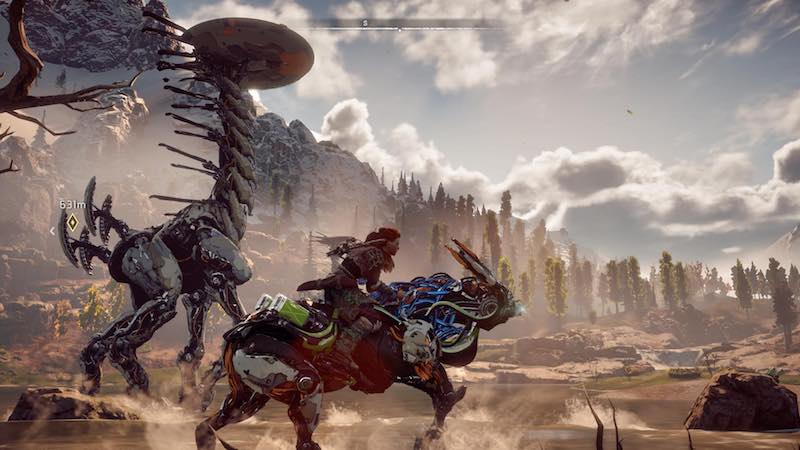 On the topic of interactions, Horizon Zero Dawn does, on occasion, let you choose your responses. They aren’t colour-coded "blue is good", "red is bad" kind of choices either. Instead your choices represent shrewd, honest, or angry responses. Unlike the one or two word description choices in Fallout 4 or the inaccurate summaries from many a Telltale game, they’re fairly on point and impact the game’s plot akin to The Witcher 3. While it might be tough to judge the impact of your choices immediately, they will colour your experience as you get to the end.

Without spoiling much, Horizon Zero Dawn is a near perfect narrative with spot on pacing, which doesn’t meander or have unnecessary filler portions like other games. Everything of consequence is explained and it doesn’t push itself to set up a sequel. Instead, all loose ends are tied up, which is a refreshing change from how most games are made these days.

Clocking in at around 30 hours if you were to stick to the main story alone, and much more if you were to experience everything it has to offer, Horizon Zero Dawn is welcome addition to a generation of games that’s seen developers push open-world tropes into many a title, some with barely any reason. The end result is a game that easily surpasses Guerrilla Games’ other works - yes, even Killzone 2. Horizon Zero Dawn is an essential for PS4 owners and role-playing game fans alike.

product Horizon Zero Dawn merges robot dinosaurs with bows and arrows to give you an adventure unlike any other on the PS4.