Hellblade: Senua’s Sacrifice is not what you’d expect from Ninja Theory, the developers behind Heavenly Sword, Enslaved: Odyssey to the West, and DmC: Devil May Cry. It features a darker tone than those games, and limited upgrades. But in this case, change is good.

The game’s laser focus on telling a dark story in a bleak world is in sharp contrast to the entertaining elements of its previous works. Suffice to say you won’t see anything remotely close to that conversation in DmC: Devil May Cry. What you get, instead, is a single, dire, desperate note through the duration of our seven hour playthrough.

You’re Senua, a Celtic warrior who traverses through Hel - a twisted realm where the dead reside, in an attempt to bring her boyfriend Dillion back to life. It’s a fragmented world pieced together by reality and the darkness - psychotic manifestations of her mind.

Along the way, you’ll encounter stone carvings that flesh out the game world, fiendish puzzles to solve, and encounter warriors who bay for your blood, all while paying close attention to the voices in Senua’s head, which represent different elements of her personality.

Not only do they provide narrative information, but they are also an invaluable source of advice that helps you solve puzzles and defeat the game’s bosses. The former consists of simply focussing on required shapes or visual elements, or navigating through an area in the correct order. They aren’t as much as brain teasers as they demand situational awareness.

If you treat these segments like a walking simulator such as Tacoma or Firewatch, you’ll find yourself stuck more often than not. Pay attention though, and you’re rewarded with more lore and detail on Senua’s quest, adversaries and more than a few bits on Norse mythology.

Speaking of which, most of the enemies you face off against are viking warriors. They’re no slouches either, with different types from the sort who use swords, shields, and axes, to others like the fire-wielding giant Surtr, and raven-inspired god of illusion, Valravn. They are a varied bunch and liven up the proceedings, requiring you to employ different strategies to defeat them. 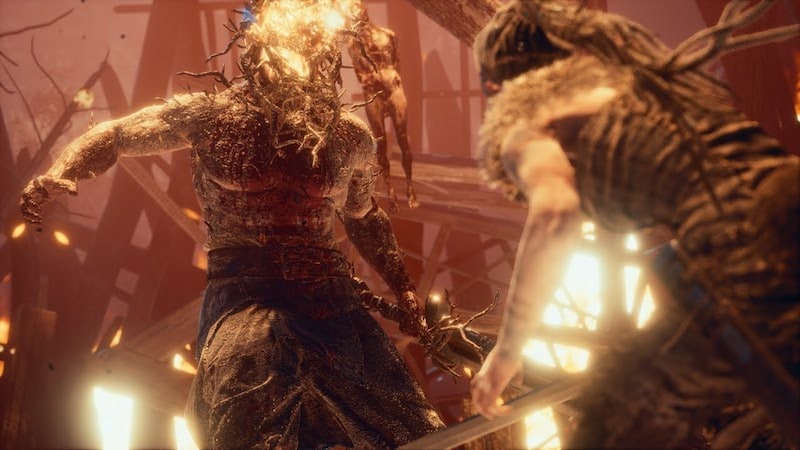 Unlike Ninja Theory’s previous games, you won’t have more than one sword and you can’t upgrade it either. But the combat stays fresh and opens up - granting you access to new abilities such as being able to slow down time, which comes in useful when up against multiple foes.

With speedy stabs to heavy hits, Senua might not be as skilled as say, Dante from Devil May Cry, but the moment to moment swordplay stays fresh, and like most action games, blocking an enemy attack at the right time opens up a window to counter. It feels solid and each encounter feels a lot more immediate with the camera closing in, allowing you to focus on one enemy at a time before moving to the next one. Despite the disparate elements of exploration and puzzle solving, battles flow naturally into the game’s structure rather than just being another bullet point on the game’s store page.

This is all tied together by a cohesive, gripping story that’s brought to life with fantastic voice acting, particularly from Senua’s guide for the journey, the Darkness that inhabits the world, and Druth. This is coupled with slick animations and motion capture that further add to the immersion.

Without spoiling much, Hellblade’s production values do a lot to bring its world, characters, and most importantly, its plot to life. To add to the immersion and focus on telling its tale, Ninja Theory opted to remove any form of meters or indicators, forcing you to rely on visual cues during combat and puzzle solving to progress. 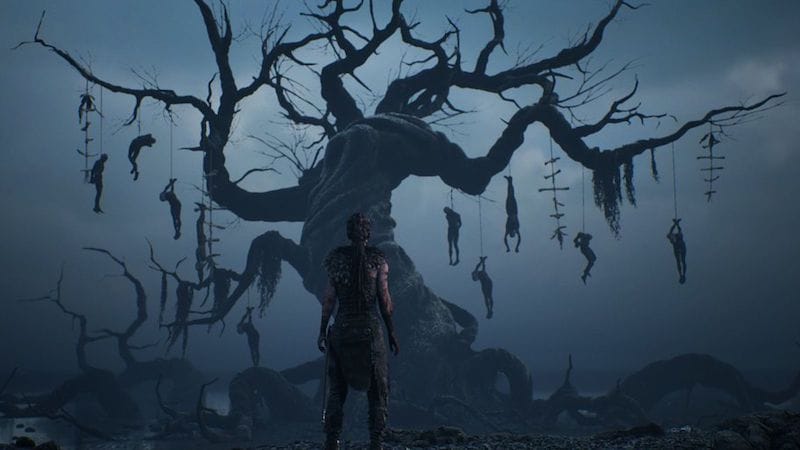 Speaking of visuals, Hellblade is a treat to look at. Be it mystical locales like the Sea of Corpses or glimmer on your sword when you execute the perfect parry, it’s a fantastic looking game and a showcase for the Unreal Engine 4.

However, it's not perfect. We experienced minor frame-rate drops on the PS4 Pro version of Hellblade and the controls could be better explained to players - the game comes with no form of tutorial, or any other handholding, which could put some players off.

Considering how good the combat is, some sort of endless mode that has you taking on Hellblade’s many nasties would be a welcome addition too - perhaps in the form of a post-release update? But given how inexpensive Hellblade is compared to the average AAA release, there’s little to complain about.

Marrying combat, narrative, and strong characters, Hellblade: Senua’s Sacrifice is greater than the sum of its parts, making it well worth its asking price. It might not be the sequel to DmC: Devil May Cry, but it’s a tense, dramatic experience that’s worth the price of entry.

product From the makers of DmC: Devil May Cry comes Hellblade: Senua’s Sacrifice. Is it any good? Find out in our review. 4.5 out of 5 stars