Forza Motorsport 7 is a simulation racing game has been in the spotlight ever since Microsoft announced the Xbox One X. It’s a first-party game for Windows and Xbox One, and one of the first to be optimised for the Xbox One X. The game promises a realistic driving experience coupled with stunning visuals, both of which hardcore racing game fans appreciate. With a wide variety of cars and tracks, Forza Motorsport 7 looks exciting on paper but does it deliver?

Forza Motorsport 7 has been developed by Turn 10 Studios, which Microsoft established way back in 2001 to develop the Forza series. If you played the excellent Forza Horizon 3 and came here hoping for more of the same, you should revise your expectations or take a U-turn. Forza Horizon 3 (Review) is an arcade racing game with little emphasis on realistic driving and more emphasis on building a festival in Australia, making insane jumps off cliffs, and driving on gravity-defying Hot Wheels tracks. Forza Motorsport 7 is the polar opposite. Here you drive mostly on racing tracks closed to traffic, and the emphasis is heavily on mimicking the driving experience found in real-world cars.

This means that casual racing game fans may not enjoy Forza Motorsport 7, but hardcore fans are bound to love it. However, we must commend Turn 10 Studios for the effort they’ve put into making this game approachable for everyone. By default the game has all assists enabled so it will do its best to ensure that your car stays on track and you get to have fun. If you want, you can disable these assists, that is if you enjoy manually changing gears, having a fine control on the car’s steering, and if you think you can corner a car without spinning it off the track. We’re not highly skilled at simulation racing games and yet we found ourselves having fun learning how to drive without assists.

The game has a pretty decent story to get you started. You’re a rookie who wants to win the Forza Driver’s Cup but there are no shortcuts to greatness, so you must start by winning the lowly Seeker Championship. Each championship or cup has several different types of races on offer and winning these earns you points. Upon reaching a points threshold (2,500 for Seeker Championship), you win the championship and move on to the next one. You’ll find yourself knocking over bowling pins with a Limo on a race track for points, driving vintage cars in a four-race cup, or even driving actual trucks on a closed racing circuit.

One issue is that for every race, your car’s parts are “homologated” (restricted to match your competitors) in order to keep things fair. This will irk hardcore fans as upgrades to your car could get negated before the race.

That apart, the variety of races and courses on offer is impressive and the overall driving experience is top-notch. You have to be a little dead inside if you don’t feel a rush of adrenalin while speeding through a long curve in a dark tunnel at 180 kmph. The weather effects add another dimension to Forza Motorsport 7 and make every race look beautiful. From sand blowing across tracks to pouring rain, every weather effect adds a lot to each race. We highly recommend that you switch the camera to the driver view for more realism. The controls follow the standard for racing games so you use RT to accelerate, LT to brake, and A to apply the e-brake. The controls are very responsive and we had no trouble using them whatsoever. 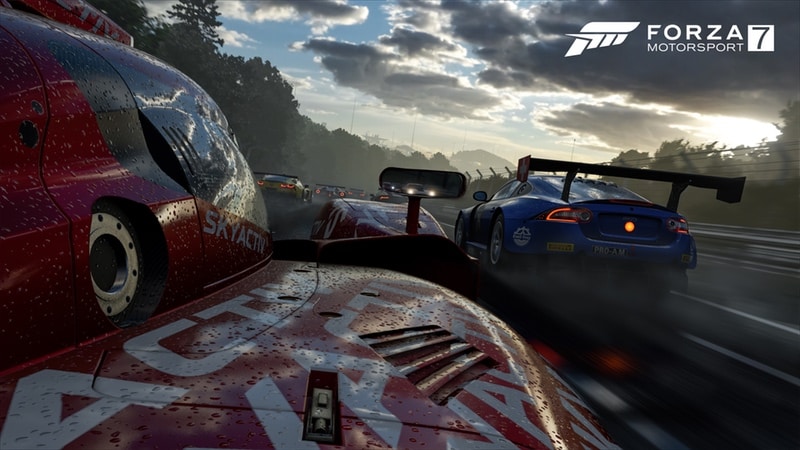 As is clear, there is definitely a lot going for Forza Motorsport 7. However as is the case with pretty much everything related to Xbox One these days, there’s a pretty big catch. First up, be prepared for massive downloads. Even if you buy the Xbox One version on disc, you’ll have to download around 50GB to play the game as Turn 10 Studios chose not to go for a multi-disc install. If you play this on an Xbox One X, there’s another additional 50GB to download as 4K assets are much larger.

Secondly, brace yourself for long load times and menu stutters on both the Xbox One and Xbox One S. On the Xbox One in particular, you really have to wait a lot before starting a race. The “Next Race” button is replaced with “Loading” so you can check out options and other menu options but it’s annoying if you just want to jump into a race. The PC version of Forza Motorsport 7 has performance issues too, and we hope Turn 10 Studios fixes all of these with a patch.

Finally, the scourge of loot boxes and micro-transactions has infected Forza Motorsport 7 too, and this is a big problem. The long loading time we just mentioned is when the narrator very casually reminds you that you have a lot of in-game credits to spend, so why not spend them on prize crates. This is another name for loot boxes, where you get to “win” mods (that add challenges to races for extra credits such as racing at night or in the rain), gear, or even new cars. These prize crates cost up to 600,000 credits and Turn 10 Studios plans to let you buy credits for real money soon. Anyone who’s played free-to-play games on smartphones won’t be surprised by this at all, but the real shocker is that you pay at least Rs. 4,000 up front to play Forza Motorsport 7. This kind of a gacha style lottery system has no place in a premium AAA game. 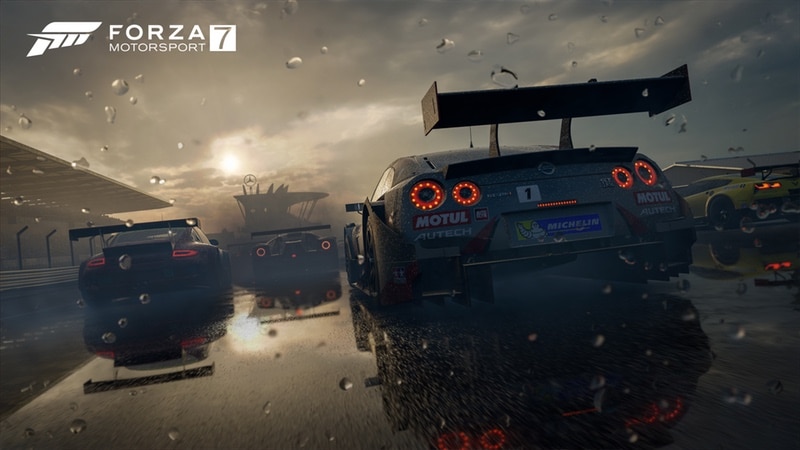 That’s not the only issue — even those who paid Rs. 6,700 for Forza Motorsport 7 Ultimate Edition aren’t getting a great deal. They get more cars, but the “VIP membership” included with this lets you double the credits earned for only 25 races. After that, it’s likely that you’ll have to pay again for VIP membership.

These monetisation decisions weren’t a part of the more casual Forza Horizon 3, and that makes us feel that Microsoft and Turn 10 Studios consciously chose to extract every penny out of hardcore racing game fans. They’re far from the only company to try this in AAA gaming, but it still is very sad to see such a great racing game being reduced to feeling like a free-to-play money grab.

If this doesn’t bother you as much as it bothers us, Forza Motorsport 7 won’t disappoint you. Sadly we just can’t look past the aggressive monetisation tactics used in the game. Forza Motorsport 7 is a fine simulation racing game in itself, which could have been legendary if not for the long loading times and micro-transactions.

Gadgets 360 played a review copy of Forza Motorsport 7 on an Xbox One. It’s available on Xbox One and Windows as a Play Anywhere title at Rs. 3,999

We spoke about Forza Motorsport 7 on Transition, our weekly gaming and pop culture podcast. You can listen to it via Apple Podcasts or RSS or just listen to this episode by hitting the play button below.

Further reading: Forza, Forza Motorsport 7, Xbox One, Xbox One S, Windows 10, Xbox One X, Forza Motorsport 7 price, Forza Motorsport price in India, Turn 10 Studios
Pranay Parab Email Pranay Pranay is in charge of podcasts and videos at Gadgets 360. Over the years, he has written over 500 tutorials on iPhone, Android, Windows, and Mac. He has also written in-depth reported features on the intersection of technology and culture, reviewed fitness wearables, been the social media manager, started two podcasts, and produced several tech videos. He loves travelling, particularly to places not frequented by tourists. He keeps running half-marathons across the country and hopes to complete ...More
Google Pixel 2 & Pixel 2 XL Launched, Price Starts at $649: Event Highlights

product Forza Motorsport 7 is an excellent simulation racing game held back by aggressive monetisation. 3.5 out of 5 stars