Forza Horizon 4 for Windows 10 PC and Xbox One does not hold back. From an enthralling opening section that does wonders to set up Forza Horizon 4's focus on the change of seasons to gargantuan spectacles of car versus hovercraft versus train action, developer Playground Games may have crafted one of the most enjoyable racing game to date. Set in the UK, Forza Horizon 4 has you racing through Spring, Summer, Autumn, and Winter.

You'll drive a host of vehicles from the utilitarian Mini Cooper to the exotic Lamborghini Huracan in an attempt to progress through the game's many races and events to claim the ultimate prize - a golden wristband to indicate your accomplishments as one of the greatest racers around. These include street races, dirt track events, stunt races that follow a storyline with you as a stunt car driver for a movie, and showcase events that put you against some the aforementioned vehicles like trains and hovercraft.

The first thing you'll notice is a distinct change in tone in Forza Horizon 4, a fact that is obvious from the game's opening moments. You’ll find yourself swapping cars and seasons in dramatic fashion, from wrestling with frozen lakes in a Land Rover Defender 90 to burning rubber in a McLaren Senna in the Summer.

Although the festival vibe of past entries exist, it takes a backseat to the racing and seasons you have to contend with. For example, your tricked out 2017 Nissan GT-R while an absolute beast during Summer is useless on icy roads, making the switch to a Subaru Impreza WRX-XTI a better bet.

It also means that the overall rating Forza Horizon 4 gives to each car is less important than choosing the right one for the current task at hand. And while Forza Horizon 4 lets you modify any car to suit any season, you'll have to delve deep into considering what you need such as adjusting suspension or changing tires. Thankfully, you'll unlock cars at a steady clip, making either option a viable strategy.

All along the way, you'll be forced to adapt your driving style. Be it making your turns earlier in Autumn to compensate for slicker roads or keeping an eye out for previously dry riverbeds turning into full-fledged streams that can sink cars with low ground clearance in Spring, you'll find yourself being more mindful than usual of the conditions as they have a direct impact on your performance. There are seasonal bonuses too such as snowmen dotting the map. Crashing into them nets you minor boosts to aid progression.

Speaking of progression, Forza Horizon 4 is not too dissimilar to The Crew 2 and Forza Horizon 3 in that you'll need to earn influence, which is this game's equivalent of followers. Nearly every action in Forza Horizon 4 helps you gain this — acquiring new vehicles, taking part in races, and even simply barreling through the English countryside crashing into everything you see. Even if you come dead last in a race, you'll gain a small amount of influence.

Initially, the goal is to gain enough influence to qualify for the next season and eventually, garner enough of it to make it onto the Forza Horizon roster, which gives you access to even more activities and a larger pool of competition as well as a weekly, automatic change in seasons.

Despite Playground Games designing progression through well-tested methods instead of delivering something new, it doesn't feel old or tired. This is thanks to the superlative driving that lets you customise aspects such as handling turns and ABS, you can tailor Forza Horizon 4 to suit your play style. Much like Forza Horizon 3, we felt it's best played as a pure arcade experience where car damage is simply cosmetic and the in-game physics aren't totally true to life. 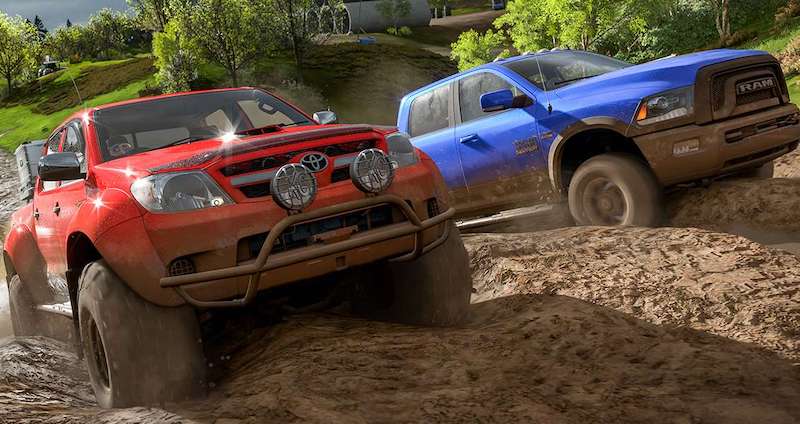 This is backed up by stellar production values. Particularly its lighting effects as you blast past forests with sun rays bouncing off your ride complete with reflections and little details such as specks of dust kicked off by your tires make each race compel you to come back even if you crashed into a dozen trees along the way.

In a year that's been threadbare for Xbox One exclusives, Forza Horizon 4 is perhaps the best looking game on Microsoft's consoles. Regardless what you're playing on, be it the original Xbox One, Xbox One S, or Xbox One X, you're treated to a visually arresting experience with the Xbox One X letting you choose between prioritising frame rate or visuals, which is always a nice touch. Though the loading times could be faster and the menus could be snappier as well, navigating the interface brought back memories of the original Xbox One at launch, not the most fluid or intuitive to use. Plus the process of claiming cars from the game's storefront could be less tedious than individually choosing them for download. Hopefully a patch rectifies these concerns.

Another area where Forza Horizon 4 falters is in its licenses. You won't find old favourites like the Mitsubishi Lancer or Toyota Celica here. Even manufacturers like Lexus are completely absent from the game. Granted Microsoft has made this issue known weeks ago but it doesn't soften the blow when you consider that Forza Horizon 2 and 3 had them.

Nonetheless, these issues melt away when you're jostling against a giant hovercraft in muddy terrain as you're sliding across a dirt mountain track or participating in a timed stunt race across the narrow streets of Edinburgh.

Forza Horizon 4 continues the series' tradition of marrying exceptional gameplay and visuals. The introduction of seasons adds a welcome element of strategy to make a wholly enjoyable racing game. If you own an Xbox One or play on a Windows 10 PC and have even a faint interest in racing games, Forza Horizon 4 is well worth checking out.

product Forza Horizon 4 for Windows 10 PC and Xbox One release date is October 2, should you bother with this racing game? Read our Forza Horizon 4 review to find out. 4.5 out of 5 stars