The most familiar and frustrating thing about Football Manager 2018 – the latest in Sports Interactive's annual series of management simulators – is that it's inconsiderate as always. This game has been around in one form or another since the early 90s, and seems to have only become more complex and uninviting over time. If the name didn't give it away, the game has you control every aspect a football club as its manager from dealing with players and staff to devising match tactics and seeing them come to life. Even for a football nerd who loves spending hundreds of hours shaping the destiny of a virtual club, FM 2018 is like coming up against a brick wall.

For those of you that are new to the series, every menu screen in FM 2018 – and there are a lot, given you spend most of your time staring at names, numbers, and charts – can be equipped with its own set of numbered yellow circles, which help introduce you to the hundreds of aspects that are crucial to the smooth functioning of your team. You can choose to dismiss them once you've grasped the fundamentals, or keep them around as a reminder.

At the same time, Football Manager must also continually cater to its existing, dedicated niche, which is why it needs to integrate new mechanics that further deepen the series in every way possible. One of the biggest additions is an all-new module called Dynamics, which details how your players relate to each other, the social groups in the team, and of course – their relation with you. There are team leaders that control the mood of the dressing room, and can cause chaos if you upset them.

To figure out how intelligently this had been coded, we created and installed a 24-year-old at the seat of Manchester United, one of Europe's biggest football clubs. Though FM 2018 warned us at the beginning that elder players wouldn't necessarily give us the needed respect – we were still given a great career background, which seemed dubious at best – it didn't seem to have any impact on the atmosphere, with most of the influence coming from managerial comments. 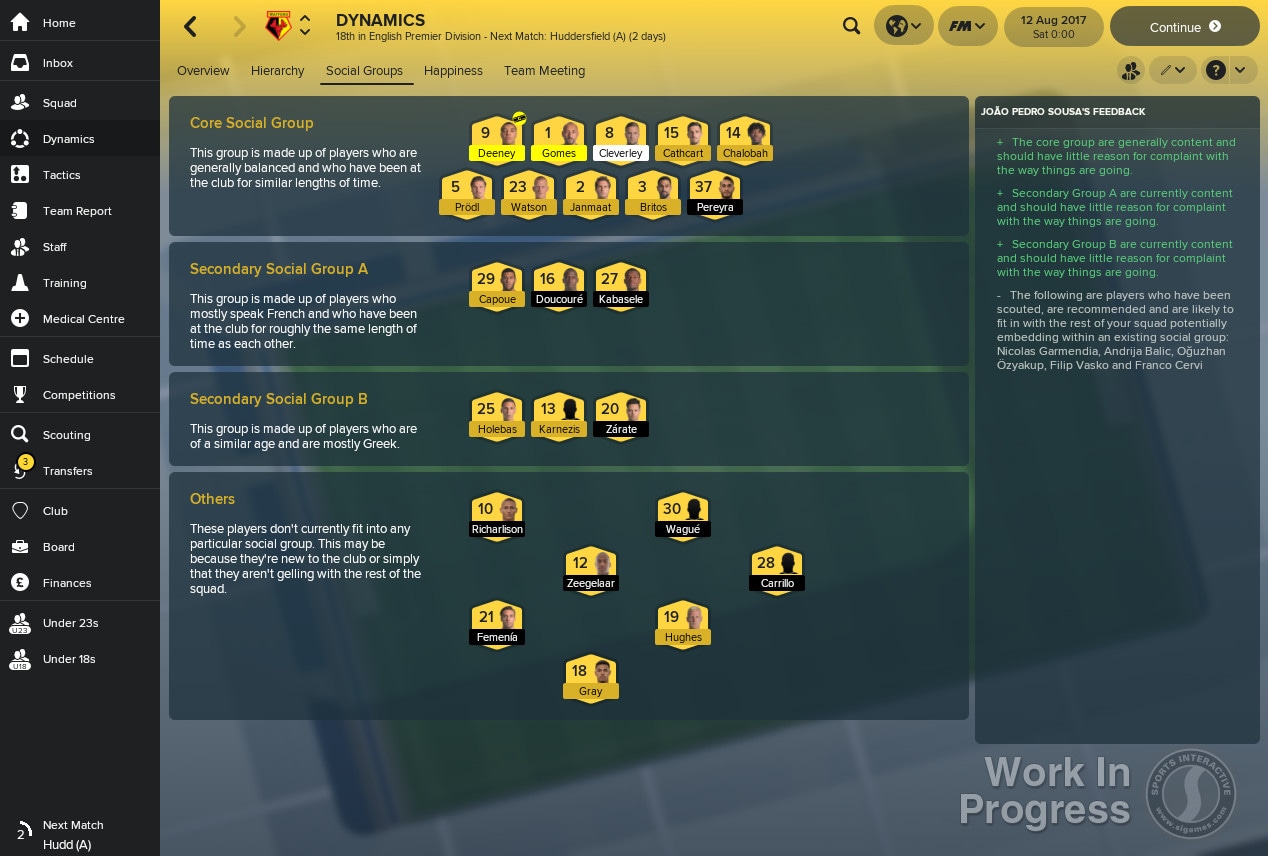 If anything, the Dynamics system pushes FM 2018 away from its footballing core, pushing it into the territory of The Sims, at the risk of making it a babysitting simulator. And given that the game hasn't yet made use of natural language processing and only allows you to choose from limited, stock responses, leaving squad morale and cohesion at the mercy of the AI feels restrictive and unfair.

The second big change is in the scouting department, which has been remodelled with more advanced filters, budget settings, and reports from the club's in-house data analysts. And in addition to the existing five-star rating system, scouts will now also provide an overall rating out of 100, which helps quicken the decision process: to bid or not to bid for a particular player. But the redesign has also tweaked how you get scout reports, in the form of different pages for each player, that you must address one by one.

It would've been much more convenient to display the stats in a list form – similar to how it used to be – which would let you run through the available options in a much quicker fashion than is possible with one player after another. The other problem is with the UX of the inbox scout reports, where the buttons keep shifting around after every action, which makes it tough to quickly browse through scout suggestions while keeping your eye on one or more stats.

Football Manager's scouting depth is still unrivalled, of course. For FM 2018, Sports Interactive relied on a total of 1,300 scouts from 51 countries, who helped create a vast database of more than 700,000 players, coaches, and officials from thousands of clubs and national teams. It's quite likely the most comprehensive collection there is, which is why the Premier League struck a partnership with the developer in 2014 for the data within, and TV pundits rely on it for their coverage and analysis. 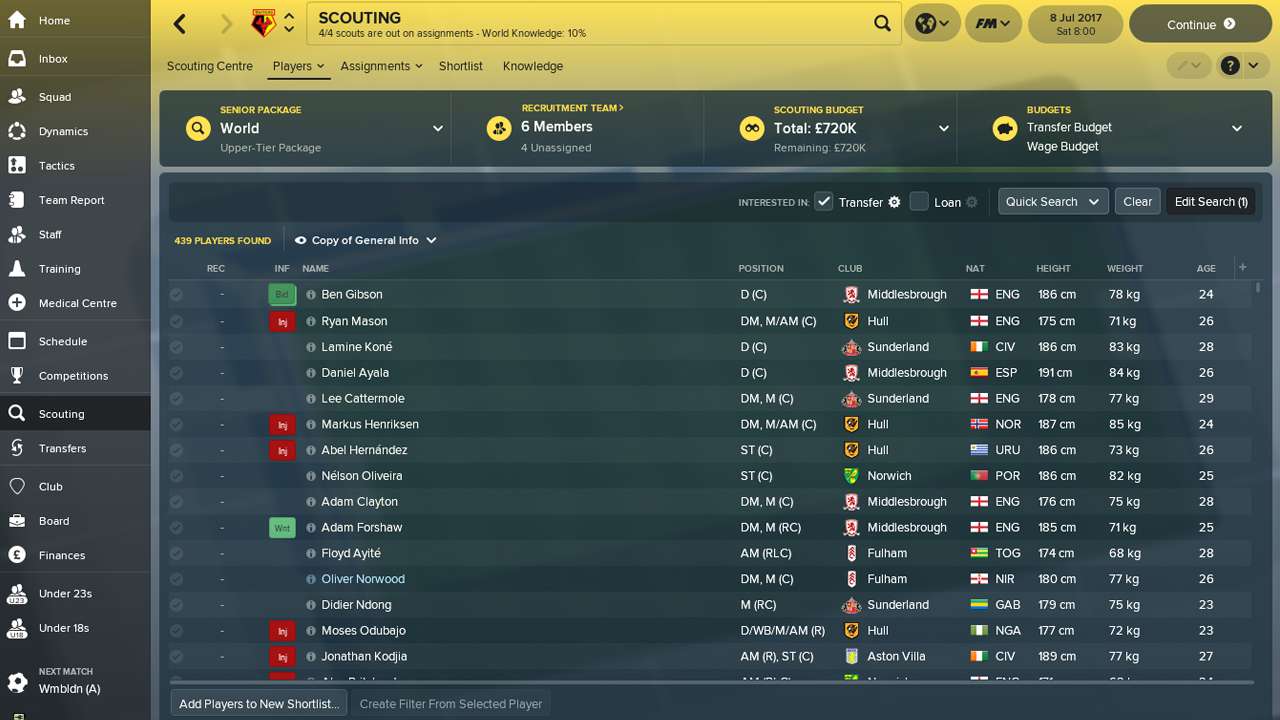 The wealth of the player database makes searching for hidden gems and prodigies one of the most rewarding aspects of Football Manager, in the hopes of coming across a teenager who has the potential of being the next Lionel Messi. Thanks to FM's level of realism though, it's very much possible that the future star you groom for years turns out to be homesick or have leadership problems, and ends up never achieving his potential.

With FM 2018, Sports Interactive is taking that realism a step further, for example including Brexit in last year's title. There's a possibility that generated players - the fictional ones that are created by the game once today's stars start retiring - will come out as gay, and the club's handling of the matter will affect revenue, morale and public relations. It's a good step from the developer, especially given the prevalence of homophobia in the sport, and why almost no known gay footballers exist.

It's disappointing then that Football Manager has yet to expand into women's football, which is something EA has already waded into with its FIFA franchise. Admittedly, it's much easier to code a randomised chance of a player being gay versus gathering hundreds of scouts to collect data on women's players from around the world. You can choose to create a female manager if you like – it's been around since FM 2009 – though it doesn't have any effect, and the avatars still look hideous no matter how hard you try.

Speaking of visuals, FM 2018 also boasts of a new match engine, designed with help from Total War developer Creative Assembly, which is a fellow subsidiary under parent publisher Sega. But you shouldn't expect anything on the levels of even past-gen FIFA, with the mo-cap animations still decidedly stocky, and player faces non-existent (on both team sheets and the pitch). Crosses are so bad often that they end up hitting the side-net, and players will sometimes freeze before another comes along and easily takes the ball off them. 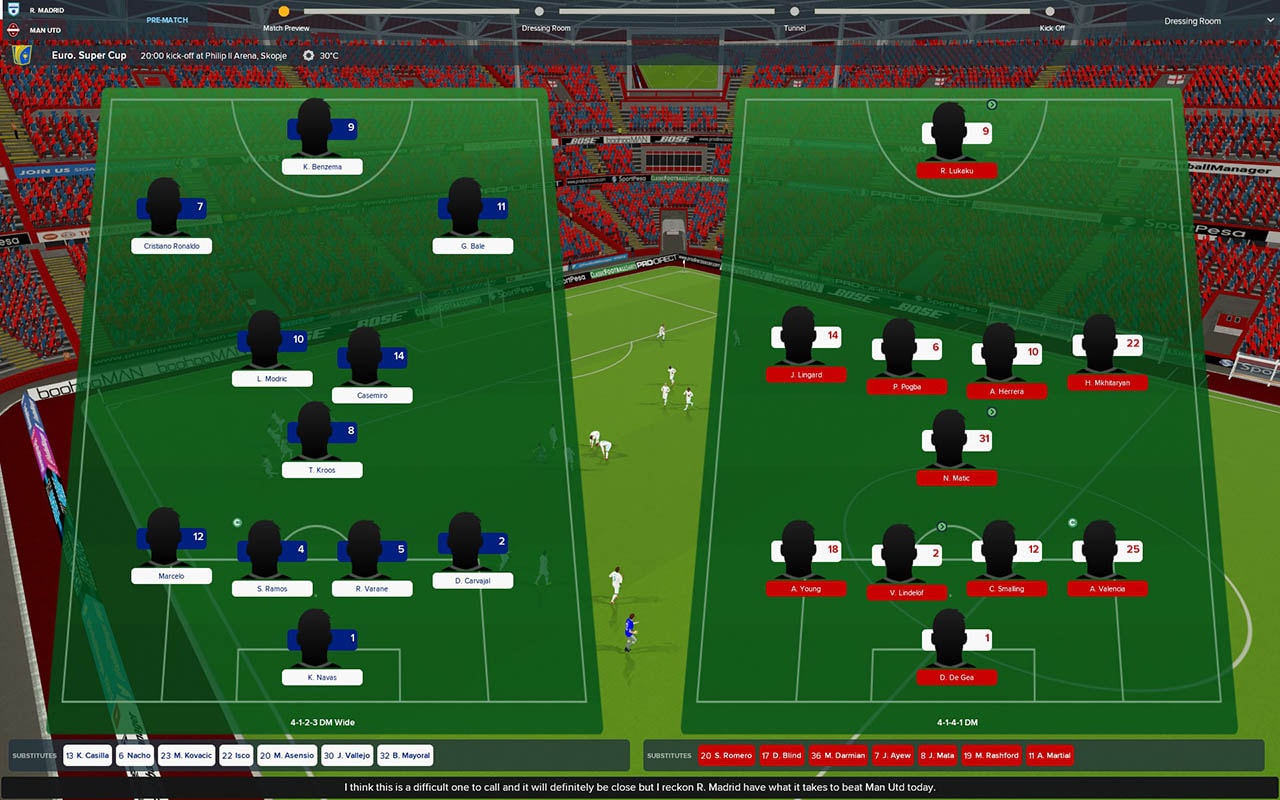 Graphics matter little for most FM players, who will spend most of their time clearing their inbox of new messages, fielding questions from journalists pre- and post-match and even sometimes in the tunnel, and reading up resumes of prospective club staff. But bugs exist in FM 2018's spreadsheet department too, where some dialog boxes refuse to go away if you don't press the desired button. It doesn't help that it's never obvious how you're supposed to do something, with simple options such as reversing unmade substitutions nowhere to be seen.

Other big changes include a redesigned tactics screen, which shows you which pitch areas you'll dominate and are vulnerable in, plus a pre-match briefing that lets you set out a tactical plan for the upcoming opponent; and a new medical centre, where sports scientists play a bigger role in helping you tweak training and avoid injuries. Unfortunately, the rate of injuries still seems to be on the higher side compared to real life, despite promises of "low injury risk" to our players.

But despite those various additions and changes, FM 2018 doesn't alter the game experience of its predecessor in any dramatic fashion. If anything, they seem to have resulted in a negative perception, what with the Steam rating hovering at "Mixed" barely a week since launch. It's likely a result of complacency, given there's little to no competition in its video game genre.

For those looking to rise through the ranks from amateur to professional football, or start at the elite clubs and prove your mettle, Football Manager 2018 provides more immersion – and demands even more dedication – than any other game in its class. It never makes you the centre of its world (unlike FIFA or PES, which provide wish-fulfilment fantasies) nor does it let you actually play sports despite being a game about one, but there's a certain charm about getting lost in its wilderness.