In our first impressions of the game we noted that while it sported a wealth of options, its frame rate was far from optimal. Has publisher Square Enix managed to rectify some of Final Fantasy XV Windows Editions glaring concerns in its retail build or is it more of the same? Let's find out.

Final Fantasy XV Windows Edition options
Firing up the game, we were treated to the same set of options present in the Final Fantasy XV Windows Edition demo with a couple of minor changes. For one, high quality assets - or the High-Resolution Pack, as it is called - are not enabled by default. Instead they’re a mammoth 65GB download separate from the main game’s initial 75GB download and can be toggled on or off.

Secondly, Nvidia’s bespoke Ambient Occlusion option, VXAO (short for Voxel Accelerated Ambient Occlusion) is now accessible — it was previously greyed out. Ambient Occlusion is a rendering and shading technique to calculate how much light is being cast upon any one point in a scene and Nvidia claims its method to be more authentic. Three other Nvidia-specific features — TurfEffects, HairWorks, and ShadowLibs are also present that enhance grass, hair, and shadows respectively, and were usable in the demo as well as the full game.

By and large, most would find themselves content with the settings on offer. From tweaking the frame rate with choices of 30, 60, and 120fps or dictating the amount of video memory used by the game, there’s enough room to tweak for performance or image quality. And on our test machine that consists of a Intel Core i5 3470 running alongside an Nvidia GTX 1070 with 16GB RAM and a 500GB SSD the game defaulted to its High preset with the frame rate capped at 120 and each Nvidia exclusive feature turned off. 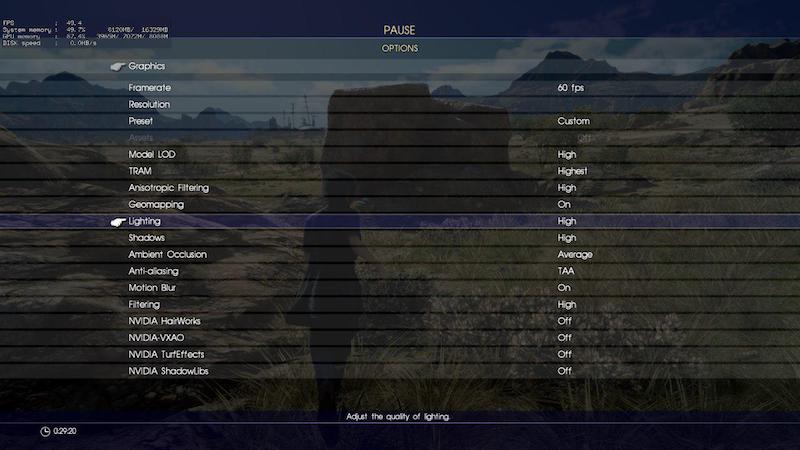 Final Fantasy XV Windows Edition frame rate
Playing the game in this state saw a highly inconsistent frame rate and jerkiness that was far from playable and in some ways, a lot worse than what we experienced in the Final Fantasy XV Windows Edition demo despite having crisp, sharp visuals that were nothing short of stunning. Ever so often, a seemingly stable 60fps would nosedive into single digits during combat or while simply traversing the game world.

However, we were far from deterred and decided to play around with the options available to us. We disregarded Final Fantasy XV Windows Edition’s presets such as Medium, High, and Highest and proceeded to calibrate each individual variable. The end result was a mix of maximum and medium options that still looked leaps and bounds above what the PS4 and Xbox One are capable of.

Setting Lighting and Shadows to High, Ambient Occlusion to Average, while keeping the Level of Detail (LOD) at its Highest ensured we didn’t lose out on too much of the graphical fidelity that makes Final Fantasy XV Windows Edition a visual feast. Be it summoning colossal allies in battle or simply exploring the world of Eos by car or foot, Final Fantasy XV Windows Edition ran at a stable 55 to 60fps at 1080p. This was with the Final Fantasy XV High-Resolution Pack turned off. Keeping it on resulted in an experience not too dissimilar to the demo.

Square Enix claims that the Final Fantasy XV High-Resolution Pack allows for an even better looking game with enhanced visuals particularly in its character models, cutscenes, and backgrounds. In our experience, you don’t miss out any major details by switching it off. Doing so allowed us to squeeze in an extra few frames to make the experience all the more palpable. More importantly, switching it off along with reducing Ambient Occlusion, allowed us to keep a consistent frame rate. This wasn’t the case in the Final Fantasy XV Windows Edition demo that had the High-Resolution Pack turned on by default as it was a part of its download.

Speaking of 4K, we were able to eke out 30fps with a similar mix of settings. It made for an even cleaner looking game. Although the performance penalty in terms of frame rate, particularly during Final Fantasy XV Windows Edition’s battles make it a non-starter. Simply put, the fluidity afforded at 60fps by sticking to 1080p make for a better experience through and through.

Granted you could up the eye candy even further by enabling each Nvidia option present - namely HairWorks, VXAO, TurfEffects, and ShadowLibs - but at 1080p it saw our frame rate stuck in the mid-20s and close to single digits at 4K. While they do make for a better looking game, they're pointless unless you have the latest and greatest gaming hardware.

Final Fantasy XV Windows Edition vs Final Fantasy XV PS4 Pro and Xbox One X
Compared to the PS4 Pro and Xbox One X versions, graphics in Final Fantasy XV Windows Edition are polished to a fine sheen, further blurring the line between CGI and what you see in gameplay. The consoles sport softer visuals, and while they look good, they appear to be held back by specifications that are inferior compared to a high-end PC. And although the Xbox One X version can go up to 60fps in its Performance Mode, it doesn't look as good as what this full-fat PC release has to offer.

Should you buy Final Fantasy XV Windows Edition?
Square Enix has made subtle yet crucial improvements to the game after its demo that make it a competent alternative to play Final Fantasy XV with one massive caveat: it is dependent on you not being averse to going beyond its presets and tweaking with the options present. With PC hardware prices seeing no sign of abating, your next best bet is playing it on the Xbox One X due to having a more consistent frame rate over the PS4 Pro version which is a distant third.

Though we wonder if it makes sense buying Final Fantasy XV at all given that Square Enix has plans to support it with content well into 2019. If you must have the definitive version of Final Fantasy XV in terms of content and updates, you’re better off waiting.