Set in the city of Midgar, Final Fantasy VII has you in the role of Cloud Strife, a mercenary in an eco-terrorist group Avalanche. What starts off as a routine bombing of a power plant owned by Shinra — a megacorporation that runs Midgar — spirals into an epic saga to save the world featuring a host of colourful characters such as Cait Sith, a cat that rides a giant stuffed toy; and Vincent, a shapeshifting vampire-like warrior with a mysterious past.

Along the way you'll battle an assortment of enemies in a turn-based fashion akin to games like Cosmic Star Heroine with its own twists such as being able to summon powerful monsters and pull off over the top attacks known as Limit Breaks. Furthermore, as you traverse through the game world you'll find yourself forced to battle enemies at random. While a defining characteristic of Japanese RPGs at the time, it is in sharp contrast to most modern day role-playing games that show enemies on-screen allowing you to avoid or engage with them as you see fit.

The gameplay holds up well. From exploring every nook and cranny of Midgar and beyond, to elaborate boss encounters, Final Fantasy VII is addictive as what it was back during its original release. It retains a lot of its old charm with a great musical score and an intriguing story that's still fresh even if you've played it before. 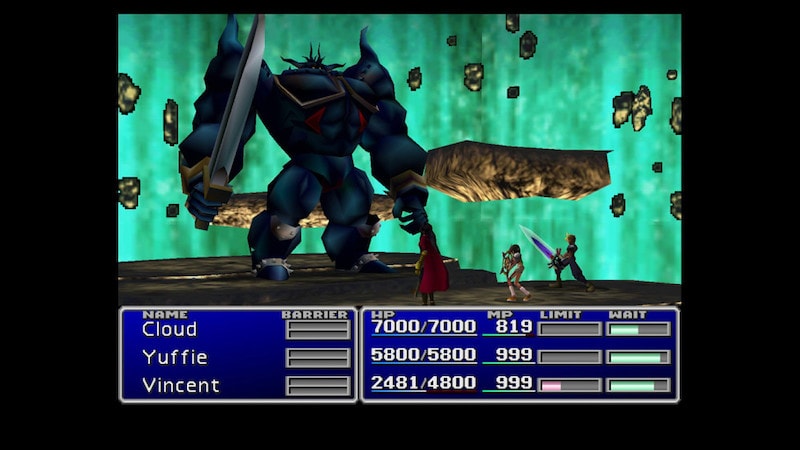 All of these elements are intact in Final Fantasy VII for the Nintendo Switch and much like its PS4 outing, it has some interesting additions.

Final Fantasy VII's download size on the Nintendo Switch seems to indicate a 1:1 port of what we got on the PS4, clocking in at around 3.3GB, roughly the same as the PS4. A quick check of its features appears to indicate the same.

You can turn off the game's random battles, speed up the pace of play by 3x to make exploring its many locales a brisk affair, and you also get a battle enhancement mode that is basically God mode — you get healed after enemy attacks and your characters have their most powerful moves at their disposal.

These modifiers are essentially what we experienced on Final Fantasy VII for the PS4 and they're welcome here as well. While the game's story is its high point, some of its elements tend to get in the way of it such as the aforementioned random battle encounters. By allowing newcomers to get straight to its best bits with minimal friction is fantastic while giving purists the option to play it just as they remember, Square Enix has ended up making Final Fantasy VII more accessible than ever.

Compared to the game on iOS and Android, the Nintendo Switch version lacks the max stats feature. What this means is, with the tap of a button your characters will be at the level cap of 99 with all abilities unlocked to use as you see fit. Granted that would speed up the proceedings in Final Fantasy VII, but the presence of a 3x speed mode on the Switch (which isn't on Android and iOS) works just as well to achieve the same goal.

Most crucially, Square Enix has managed to sidestep some of the issues that have plagued past re-releases of its classic RPGs. Unlike Final Fantasy IX on the Switch, you aren't met with ridiculously long load times and unlike Chrono Trigger on iOS, Android, and PC, you don't have to deal with an altered visual style that is more jarring than it should be, atop a myriad of technical concerns. Regardless of playing it in handheld or docked mode, Final Fantasy VII is a smooth, painless experience.

That said, it's not without its flaws. For one, the game is letterboxed with black bars on either side much like its PS4 release due to the differences in aspect ratio between the original PS1 release and what's being used now. Secondly, Final Fantasy VII is a game peppered with cinematics and lush, detailed backdrops. Though the latter holds up well, its cinematics look blurry and low-res, be it on the Nintendo Switch screen or on a bigger display.

It's disappointing that Square Enix hasn't figured out solutions for these issues after all this time as they plague other versions of the game too. They aren't dealbreakers by any means, but they make it tough to justify spending for Final Fantasy VII on the Nintendo Switch if you've experienced it on any other platform before. More so when you consider that there's nothing to make use of the Switch touchscreen. Perplexing when you consider that fully-functional mobile versions exist.

Regardless, if your only experience of Final Fantasy VII was restricted to the original PS1 release and you haven't checked it out on PS4, Android, iOS, or PC or you're new to Final Fantasy VII in its entirety, the Nintendo Switch version is worth checking out if you don't have the option to play it on any other device. There isn't too much to choose between various platforms at the moment.

All in all, Final Fantasy VII on the Nintendo Switch is an odd beast. At its core, it's a stable, fun retread of a well-worn classic. However we wish that there was more to it.

Gadgets 360 played a retail copy of Final Fantasy VII for the Nintendo Switch. The game is available now via the Nintendo eShop for $15.99 (around Rs. 1,100).