Far Cry 5 is an open-world first-person shooter for the PS4, Xbox One, and Windows PCs set in the US state of Montana. You don the role of a rookie deputy whose first day on the job has you trying to arrest Joseph Seed — the charismatic leader of a doomsday cult known as the Project at Eden’s Gate. Naturally, things don’t go as planned and you find yourself leading a resistance against Seed and his army. Far Cry 5 was announced just before E3 2017 and followed by a demo that, while entertaining, wasn’t as technically convincing as it could be - what with wonky gunplay and so so visuals. We were curious to see what the game would ultimately deliver, particularly after getting a peek at the thought process behind Far Cry 5’s development.

Unlike earlier instalments such as Far Cry 3, Far Cry 4, and Far Cry Primal, Far Cry 5 has you playing a nameless protagonist. You aren’t Jason Brody, Ajay Ghale, or Takkar, and you have no voice and no backstory to speak of. You’re quite literally playing an avatar of yourself with various cosmetic choices in terms of skin, hair, and clothes. As you’re soaking in game’s events minus any interruptions or monologues from the character you play as, they have more of an impact. Going with a silent hero turns Far Cry 5 into a very different experience. While you may feel robbed of an origin or even simply the wisecracks your character would make in past games, it gives the game’s varied cast room to shine. From bit players like conspiracy theorist Zip Kupka, to big bad Joseph Seed himself, you get a better understanding of their motivations and narrative this way.

However Far Cry 5’s silent hero isn’t the only trick up its sleeve. What’s also changed is how you progress through the game. In past entries, you uncovered vast swathes of territory to explore by climbing and activating radio towers, but you won’t have to do that anymore. The previous approach had become somewhat of a running joke and it’s something Ubisoft acknowledges here, by having one of your earliest allies tell you that you won’t be hunting for towers (save for one) for the duration of this experience. What this means is, exploring the vast world of Montana gives you a lot more freedom. Each region is controlled by one of Seed’s henchmen (or heralds as they’re known) and you’re free to tackle them as you see fit.

In order to do so, you’ll rescue members of the local resistance, bring down shrines and silos put up by the cult, reclaim outposts, and inevitably duke it out with each herald yourself. All of the aforementioned actions and story missions earn you Resistance Points. With enough of them, you’ll earn an audience with the herald at regular intervals, which will give you an idea of what you’re up against. These are tense moments shedding light into why cults are formed and add another dimension to these odd, sinister individuals.

Along the way you’ll use all manner of explosives, guns, and vehicles to wage war. Like in previous games in the series, you’ll use a pair of binoculars to scope out enemies before planning your approach. While you are rewarded for using stealthier means to get the job done, it’s more entertaining to call in an airstrike, or enlist the help of a ferocious bear to join the fray with the game’s Guns for Hire system. While this system was present in past games, its more meaningful this time around due to the larger, organised nature of the foes you’re up against. You’ll end up leaning on the Guns for Hire to aid you in tougher encounters, such as squaring off against an enemy fighter plane or a helicopter.

That said, Far Cry 5’s progression is not too dissimilar to another Ubisoft game — Assassin’s Creed Origins. You’ll find yourself indulging in many a quest to get to the next point in the story. The difference is that most of what you do in Far Cry 5 directly impacts the plot, while in Assassin's Creed, it felt like busy work before you can take on missions that push the story forward. Thanks to this, Far Cry 5 feels all the more natural as every outpost won, every silo blown up, and every resistance member rescued, all go towards taking you forward in one way or another. It extends to your own abilities or perks. Kill enough enemies with a specific weapon, call in a certain number of air strikes or just strangling an opponent to death earns you points that can be used to increase your health, carry more weapons, or even stay underwater longer.

Far Cry 5’s meaningful sense of progression is backed up by fun moment to moment gameplay. Guns feel responsive with an adequate amount of heft and weight, while driving vehicles is a tighter experience than in past games from the series. It doesn’t hold back in terms of the toys at your disposal, granting you access to everything from bows and arrows to rocket launchers (and even a gaudy armoured truck with guns called the Death Wish) at a steady clip. The game’s arsenal is one of the more generous ones in recent years.

All these features go a long way in keeping Far Cry 5 interesting. Granted, Ubisoft has waxed eloquent on how its choice of setting is still exotic, but the familiar-looking forests, farms, and enemy encampments would wear thin if not for all the creative ways you have to turn them into smouldering flames. Coupled with this being the lushest, most visually arresting locale we’ve seen, it staves off any sense of boredom.

On that note, Far Cry 5 looks absolutely gorgeous on the Xbox One X. From water reflections to expansive grasslands and even detailed character models, it’s a visual treat. Though it does suffer from one of the oldest issues plaguing open-world games — veer too far off the map and you’ll respawn, breaking immersion (pictured below). And considering that Far Cry 5 is in first-person, its cosmetic micro-transactions seem a bit redundant. Other than weapon and vehicle skins, purchases that give you a different look are wasted as you can’t see them.

In addition to this, Far Cry Arcade, which lets you create your own custom missions, is clunky to use with a controller. It tries to streamline the process with radial menus allowing you to choose between laying down different landscapes, but it’s far from intuitive to use. While we’re yet to check it out on PC, chances are that would be the way to go given that the flexibility of the keyboard and mouse are better suited for such tasks. 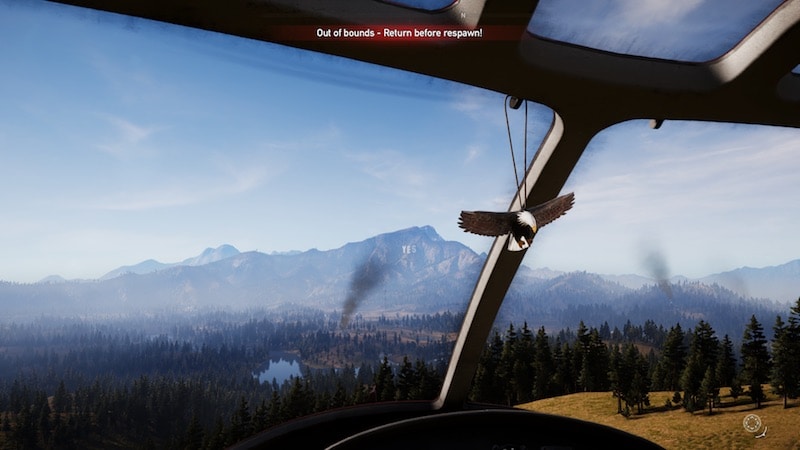 These issues notwithstanding, Far Cry 5 is a welcome entry in a series that’s been consistently entertaining over the years. The campaign is filled with memorable characters, robust progression, and action galore that all combine to make it a treat to play.

product Ubisoft’s Far Cry 5 release date is March 27 but is it any good? Find out in Far Cry 5 review. 4 out of 5 stars