With Far Cry 5 finally available for PC gamers the world over on Steam, and also Ubisoft’s own storefront Uplay, we took a look at what the PC version has to offer. The Far Cry series has had a mixed response on PC, with the very first game in the series (developed by Crytek) being a graphical showcase back in the day. Some later entries such as Far Cry 4 were far from optimised and prone to crashes and stutter at launch. Far Cry Primal fared a bit better in comparison but was just as taxing in its hardware requirements. All of this made us take Ubisoft’s claims of taking the PC version seriously with a gallon of salt.

Announced back in January, Far Cry 5’s PC specifications seem to be a lot more welcoming with support for video cards such as the GeForce GTX 670 dating back to 2012. That being said, you’ll need at least an Intel Core i5 class processor to get the game running, and 8GB RAM too.

Far Cry 5 PC graphics options
Much like the excellent Assassin’s Creed Origins, Far Cry 5 has a host of varied options to tweak. These include support for HDR displays and video quality settings that let you adjust fog, vegetation, and shadows. A field of view (FOV) slider is present as well, defaulting at 70 and going all the way upto 120, allowing you to see much more of the game world. Interestingly, the game lacks the dynamic resolution option that was present in Assassin’s Creed Origins. This method allows games to be as close to its maximum targeted frame rate. Its absence is odd considering that Far Cry 5 allows you to lock frame rate to 30, 45, 60, 90 and 120fps.

What is present and welcome though is a resolution multiplier. This allows you to play the game in 4K even if you don’t have a 4K screen. This means you can force the game to render at a higher resolution and scale it down it to your screen resolution. While this feature is present on the PS4 Pro and Xbox One X, it is switched on automatically depending on your display and not an option in the console version's menus. Here, it allows for greater granular control and customisation as you can use the slider for it to increase resolution accordingly. There’s also a handy benchmarking tool that shows off maximum, minimum, and average frame rates. 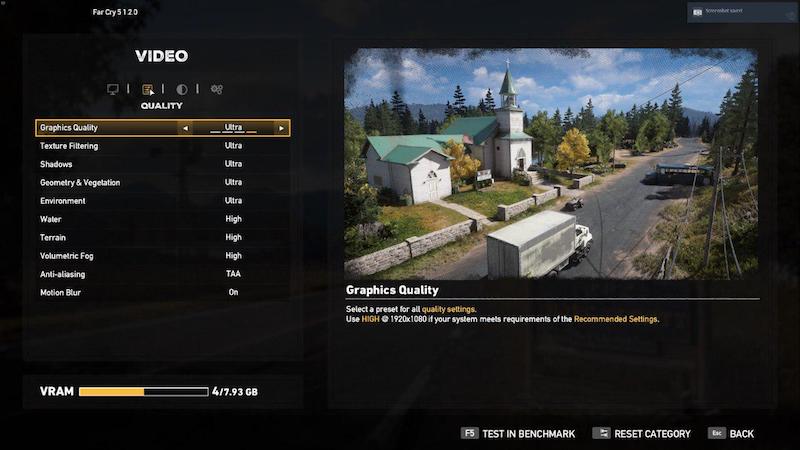 Far Cry 5 PC frame rate at 4K
For this game our primary test rig consisted of an AMD Ryzen R7 1800X processor (3.6GHz), 16GB RAM, an AMD Radeon RX Vega 64 graphics card, and a 256GB SSD on Windows 10 on an Asus 4K display. Using the latest drivers and with every preset set to their highest option and maxing out FOV at 120, we saw the game hit an average of 40 to 41fps in most scenarios and a minimum of 35fps with heavy explosions and action about with a maximum of close to 55fps while simply across the vast game world of Montana. It pretty much mirrors what we saw when we used the in-game benchmarking tool that averaged 42fps with a minimum of 37fps and a maximum of 52fps.

At 1440p with all details maxed out we saw a smoother experience. Far Cry 5 averaged 69fps with a minimum of 56fps and maximum of 83fps using the in-game benchmark. Playing it at these settings saw a similar minor difference of being a couple of frames higher like we did at 4K. Dropping the resolution down to 1080p saw a similar low of 56fps, while it maxed out at 99fps having an average of 73fps.

Despite having the capability to play the game well enough at 4K, we preferred playing Far Cry 5 at 1440p. At this resolution, the higher than 60fps frame rate made for a more responsive and smoother experience. The PS4 Pro and Xbox One X versions while also 4K capable can’t compete in terms of frame rate, sticking to 30fps. Now keep in mind that this is a game that’s enhanced for AMD PC hardware. Ubisoft recently announced AMD as its hardware partner for the game. But does that mean Nvidia and Intel users will get the short end of the stick?

Far Cry 5 Guns for Hire Missions Have a 'Gift for the Player': Ubisoft

Far Cry 5 PC performance on an Intel Nvidia PC
We were able to check out Far Cry 5 on our secondary machine that has an Intel Core i5 3470 (3.2GHz), 16GB RAM, an Nvidia GeForce GTX 1070, and a 500GB SSD. At 1080p with the latest drivers from Nvidia and every option set to the maximum (including FOV) we saw an average of 63fps in-game. Heavier scenes saw that drop to a still playable 40fps with the maximum frame rate being 85. The results were similar in the Far Cry 5 benchmark. If you’re running older hardware, Far Cry 5 is one game you won’t have to upgrade for.

Far Cry 5 PC vs Xbox One X image quality and frame rate
Sure, Montana looked more alive at Ultra settings, but dropping to Very High or even High showed off a game that at worst was on par with the Xbox One X in terms of reflections, smoke and certain other effects. However sharper textures on buildings, weapons, and character models as well as the bonus of a higher frame rate make Far Cry 5’s PC release the better of the two.

Far Cry 5 PC - should you buy it?
Far Cry 5 PC is exceptionally well optimised, running well on older machines. And clocking it at around a 30GB download size makes less taxing than most other big budget releases but it’s still a point of concern if you have a data cap or FUP on your Internet connection. The Rs. 3,499 price may be a pain point for some as Ubisoft’s prior Far Cry titles cost Rs. 1,799. However given that it’s a lot more generous in terms of what it can run on without having you to upgrade your PC (which is a problem in itself, due to high prices) Far Cry 5 is well worth the price of admission on PC even if you don’t have the latest and greatest.

Facebook Is Said to Delay Home-Speaker Unveil Amid Data Crisis
Redmi 5A to Go on Sale in India Today via Flipkart, Mi.com