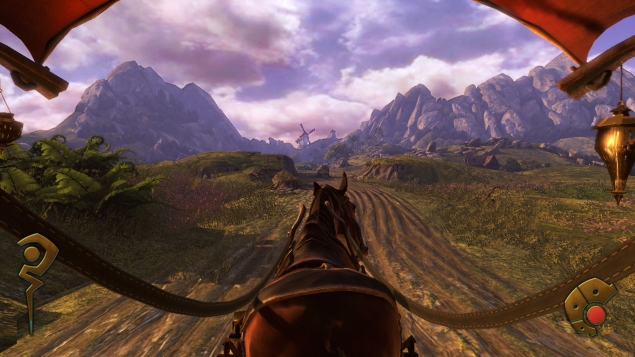 When the Kinect system was unleashed two years ago for the Xbox 360, there were promises that the camera-based, gesture-detecting gadget could turn users' bodies into paintbrushes, allow them to chat with a virtual lad named Milo, transform real-world skateboards into digital ones and transport wannabe Jedis to a galaxy far, far away.

The reality has been far less wondrous, setting an extremely low bar for "Fable: The Journey," one that this spinoff in the popular "Fable" fantasy role-playing series from Lionhead Studios easily gallops over with an enchanting gameplay mechanic that virtually outfits players' hands with a pair of magical gauntlets and the reins to a powerful horse.

"Fable: The Journey" (Microsoft, for the Xbox 360, $49.99) is set 50 years following the revolutionary events of "Fable III." The heroic bloodline has dried up and evil has returned to the realm of Albion. Unlike its wide-open predecessors, "Fable: The Journey" is a linear adventure where players serve as a daydreaming gypsy named Gabriel.

After he's separated from his caravan, Gabriel and his trusty steed, Seren, encounter blind seer Thersea, a staple in the "Fable" series who is again voiced by deliciously raspy "Harry Potter" actress Zoe Wanamaker. She guides Gabriel on a sweeping quest to reunite with his tribe and harness powers capable of taking down any foes that stand in his path.

The hand-based controls are assigned to a variety of actions that include spinning a crank to engage an elevator, cracking reigns to force Seren to trot faster, reaching up to a tree to pick an apple for her to eat, lifting a treasure chest lid up and wielding a Force-like spell to tug enemies across the landscape and thrust open closed passageways.

Other than the frustratingly slow first hour or so of the game, "Fable: The Journey" is impressively paced, seamlessly alternating between guiding Gabriel's horse-drawn carriage through picturesque vistas, leading him on intense high-speed chases and blasting magic out of his hands in ground-based, on-the-rails confrontations. There are a few puzzles, too.

The controls aren't perfect. Neither is sorcery, right? Sometimes an electric bolt or fireball goes flying off in the wrong direction on the screen. Such an issue would be unforgivable in a shooting game. It feels less severe here. The developers included an "aftertouch" ability that allows most spells to be redirected after they're cast.

The controls are certainly a departure from the other "Fable" titles, but "Fable: The Journey" retains the series' colorful aesthetic, rich storytelling and unexpected humor. The game finally answers several questions about the mysterious Theresa, who is far more fascinating than new protagonist, Gabriel, a paint-by-numbers reluctant hero.

As the game unfolds, Gabriel earns new powers that require more complex gestures to cast, and he can unlock stronger renditions of spells. He must also tend to Seren by feeding and watering her, plucking arrows from her coat and healing her wounds. It all helps to establish a bond of "Black Beauty" and "War Horse"-like proportions with the virtual stallion.

While there are a few stellar Kinect games "Dance Central," ''Fruit Ninja Kinect" and "Child of Eden" come to mind but "Fable: The Journey" is the first to successfully mix motion with emotion. It doesn't feel like it's fighting the technology and makes for an experience that, unlike most silly Kinect diversions, is truly complete. Three and a half stars out of four.