Nowadays, most games try to be everything, for everyone. We’ve seen this with Fallout 4, which borrowed liberally from Minecraft. We’ve seen it with the seemingly endless number of open-world titles from Ubisoft. We’ve seen it with each yearly instalment of Call of Duty that crams in three game modes in the hopes that you will like at least one of them.

And then there’s Dishonored 2, a game that's anything but mainstream, with a mature story, tight narrative, political intrigue, and a surprising amount of- detail in its steampunk world. Despite this, it does the best job of appealing to everyone.

You once again take on the role of Corvo Attano — the masked assassin and protagonist of the first game, blessed with supernatural powers - but this time you can instead choose to play the game as his daughter, Emily Kaldwin, who is the Empress of Dunwall, the city where the events of Dishonored took place. Dunwall finds itself in control of a nefarious force, forcing you to go on a journey to its surrounding isles, uncovering a sinister conspiracy. Along the way, you’ll infiltrate a dilapidated hospital holding morbid secrets, an intricately crafted mansion with many a hidden room devised by an evil genius, and a conservatory overrun by a coven of witches. Dishonored 2’s level design never ceases to amaze in terms of imaginative vistas and the many styles of play they accommodate.

Much like Deus Ex: Mankind Divided, here too you could run amok and stab everyone in sight, or simply slink past unnoticed. While the latter option does require a fair bit of trial and error, doing so results in what the game calls low chaos— the game world reacts favourably, with lax security in its last level, and an outcome that isn’t too grim. This forces you to think abut how you are approaching the game - whether you want immediate gratification by using the many powers that permit offensive play but lead to a darker ending, or a slower, more deliberate approach that requires you to study enemy movements before traversing from cover to cover, for a brighter conclusion.

Speaking of powers, Dishonored 2 builds on the occult elements of the first game. You can summon rats, stop time, or teleport from one area to another as Corvo, with a familiar set of powers from the last game. This is great for the stealth-minded player. Emily comes a different play style. With her, you can morph into a creature of pure shadow, sucking the memories out of those in your way with the Shadow Walk ability. Or you can link multiple targets, incapacitating them with a single blow making them fall like dominos, which is, incidentally what this power is called. 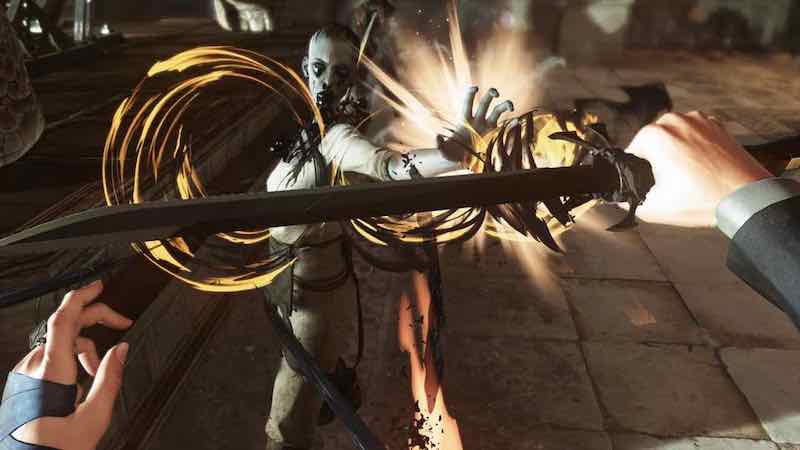 Like the first game, you’ll have a specific target to eliminate in each location, and it's up to you to figure out the best way to do this. Do you land a sleeping dart rendering them unconscious, allowing a speedy escape from a distance? Do you get up close and knife them, ensuring the job is done, all while defeating all the foes alerted to your presence? Or do you explore your surroundings and discover a third way to get rid of them, such as reducing their mental faculties to a pulp, or removing their access to powers? The sheer satisfaction of finding alternate paths to putting an end to a target, and their resultant outcomes, adds another layer of nuance to the gameplay.

Over and above this are Special Actions. These are essentially side-quests you can take on between main missions. Be it robbing black market stores, or reclaiming a body from the authorities, they’re welcome distractions that add some liveliness to the game world.

Combined with responsive controls, Dishonored 2 is great to play. Developer Arkane has managed a fine balance between accessibility for newcomers, while keeping fans intrigued for another round. We wish we could say the same for the narrative. If you want to know what's going on, you won’t just need to play Dishonored, but its DLCs as well; particularly The Knife of Dunwall and The Brigmore Witches. Series veterans will feel right at home though.

A much bigger issue is that the game’s PC performance is erratic. Poor frame rates, and multiple random crashes to desktop even on PCs with high-end video cards like the Nvidia GTX 1080, make for a nightmarish state of affairs given how well Dishonored 1 played. The difference is big enough to warrant avoiding it on the PC for now. While a patch is available in beta for the PC, early reports indicate it doesn't fix all of its issues. We'd recommend you play it on a console instead, or wait until the PC situation gets rectified.

With amazing moment to moment gameplay and great level design, Dishonored 2 is worth checking out provided you have the means to play it. Dishonored 2 iterates and innovates in equal measure, resulting in an almost addictive quality to the proceedings that few can match.

product Is Dishonored 2 as good as its predecessor? We tell you in our review. 4 out of 5 stars