Much like Destiny 2, Destiny 2: Forsaken begins with a bang. You're immediately dropped into a mission that has fan favourite robot Cayde-6 killed by this expansion's main antagonist, Uldren Sov. It's a bold move from Bungie, to get rid off one of the more entertaining characters of the game in service of its story that has you chasing after Sov in a quest for revenge. The stakes may not be as colossal as in Destiny: The Taken King or even Destiny 2's base game, but it gives old-timers the motivation to see Destiny 2: Forsaken's campaign to its end and newcomers to see what all the fuss is about.

Along the way you'll encounter the Barons — six bosses who you'll have to defeat before you can get to Sov. Squaring off against them is a varied affair. Be it vehicular combat onboard hoverbikes — or pikes as they're known in the game — against the aptly-named Rider or the close quarters brawl against the Hangman, they're far from the 'go to a location, shoot everything' approach to missions that Destiny 2's past expansions were rife with. 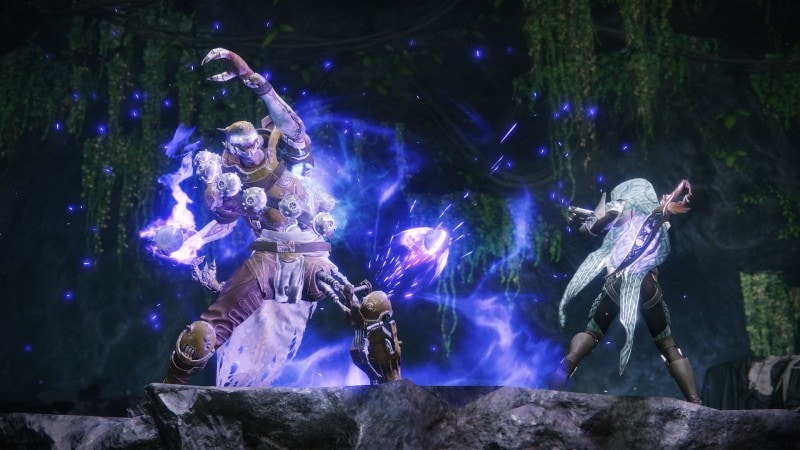 In addition to this, Destiny 2: Forsaken brings two new locations — Tangled Shore and Dreaming City. The Tangled Shore is an asteroid belt where the villainy of the known universe hang out with debris to connect each locale. There's an alien nightclub and a crashed space ship that you'll end up investigating. These environments give the Tangled Shore a lived-in, haunting feel to it, making it one of the more memorable spaces in the Destiny series. As for the Dreaming City? It's visually arresting — filled with mountains, towers, and a sinister pocket dimension brimming with secrets making it a bright contrast to the Tangled Shore and just as unforgettable.

As for its moment to moment gameplay, everything is as it should be. Shooting feels fun with Destiny 2: Forsaken's hand cannons, auto rifles, and sniper rifles sporting an adequate amount of recoil while its rocket launchers are just as satisfying. It's unchanged from the base game, which is not a bad thing.

What is bad however, is the lack of enemy variety outside of the boss fights. Sure, there's a new faction known as the Scorn, but they're very similar to one of the older foes in the game, the Fallen. This should come as no surprise as they were previously a part of the Fallen before being cast out, but Bungie could have done more to make them stand out and behave differently from most of the game's existing enemies.

Destiny 2 Microtransactions Can Get You Items That May Affect Gameplay: Reports

As for enemies, they find their way into multiplayer with a new mode called Gambit. Here two teams of six duke it out while taking down hordes of AI-controlled foes too. It's fast and hectic fun not too dissimilar to Halo 5's excellent Firefight mode with the major difference being the ability to direct enemies to the opposing team. While still early days for the mode, Gambit is a slick addition to Destiny 2's multiplayer suite that had us coming back in between sessions of its campaign.

Where Destiny 2: Forsaken falters however is with its pricing. You see, to play it you not only need the base game but its two expansions too. This means you'll be paying $60 in the US or Rs. 4,000 in India at the very least for the base game plus all expansions including Destiny 2: Forsaken if you never purchased Destiny 2 to begin with. And if you have Destiny 2 and none of its expansions, expect to pay nearly the same amount with the past expansions costing Rs.1,660 in India ($20 in the US) while Destiny 2: Forsaken sports a Rs. 2,500 price tag ($40 in the US). While its pay-to-win micro-transactions have been removed since launch, it's still tough to recommend due to this odd decision of requiring a purchase of the last two expansions to access this one. You should not have to pay the price of a brand new game just to get access to add-on content for an existing title.

All in all, Destiny 2: Forsaken is a welcome return to form for a series that's promised a lot and delivered little. There's a lot here to love despite some controversial choices in its lore, though its let down by a questionably mercenary pricing strategy. Unless you're already invested in the Destiny 2 universe, you're best served waiting for a price drop.