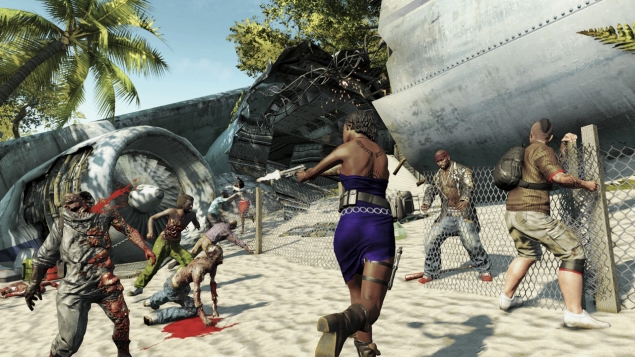 Zombie stories never have happy endings. So when the heroes of 2011's "Dead Island" made it out alive, you knew there had to be a catch.

The catch is that any video game that isn't a complete flop gets a follow-up these days. And as "Dead Island Riptide" (Deep Silver, for the Xbox 360, PlayStation 3, $49.99; PC, $39.99) begins, the zombie virus has infected the ship that rescued the survivors - and they soon wash up on another undead-infested tropical paradise, called Palanai.

So it's time for the old gang - Rapper Sam B, hotel clerk Xian, ex-cop Purna and jock Logan, along with a newbie, a Navy cook named John - to sharpen their machetes and get back to work. You can play as any one of the quintet, and you can team up with friends online to try to even the odds against the ravenous hordes.

The core zombies, called Walkers, are easy to kill mano-a-mano but can take you down quickly if they gang up on you. Other creatures can strike from a distance, throwing explosives or vomiting acid. The Suiciders, who explode if you get too close, are the deadliest until you scrounge up some firearms. The most troublesome new "Riptide" monster is the Screamer, whose wails render you briefly confused and powerless.

Your weapons start off simple - say, a baseball bat or a kitchen knife - but as you explore Palanai, you'll discover more effective tools of destruction, from machetes to machine guns. "Riptide" also carries over the original game's clever weapon-crafting system, so you can create increasingly baroque devices like an electrified samurai sword.

This is not a moody character drama like Telltale's "The Walking Dead," the landmark episodic game that won so many industry awards last year. Indeed, it's closer in spirit to the awful "Walking Dead" game Activision published this year it's all about the thrill of lopping undead heads clean off. The unapologetic gore and squishy sound effects are amusing for a while, but start to get old after about five or six hours.

That's when you realize "Riptide" is essentially the same game as its two-year-old parent. There are a few new additions, like motorboats you can maneuver around Palanai's swamps, but almost every mission is the same: get from point A to point B without getting eaten. A handful of sieges, in which all the characters defend a base from undead swarms, break up the monotony, but too often I found myself asking, "This again?"

Deep Silver is justifying the repetition by pitching "Riptide" as an expansion of the "Dead Island" world rather than a true sequel; perhaps its creator, the Polish studio Techland, has some genuine innovations up its sleeve for "Dead Island 2." But that doesn't excuse the fact that "Riptide" is beset by the same glitches that marred the original, including graphical hiccups, goofy artificial intelligence, inconsistent maps and disappearing inventory items.

Despite such sloppiness - as well as plotting that's ridiculous even by zombie-story standards - "Riptide" is amusing in spurts, especially if you can gather an online posse to deal with the hungry hordes. Still, I wish Techland had spent some time addressing the series' problems rather than just shoveling out more of the same. Two stars out of four.