Released last week, Champions of Anteria is one of Ubisoft’s newest intellectual properties. But that wasn't always going to be the case. The game was originally titled The Settlers: Kingdoms of Anteria, under development to rejuvenate the long-running city-building Settlers franchise and give it a fresh spin. That meant infusing real-time strategy into a series largely focused on resource optimisation, kind of like bringing Diablo to the world of Civilization V.

As you can expect, it didn’t go down very well. Players who were part of the closed beta said as much in feedback to Ubisoft, which prompted the change to Champions of Anteria in April, shifting the focus to strategy and characters. But the game originated as a Settlers title and had spent more time being one. And the fact that it continued to be developed by the studio behind every Settlers game ever, means that the final product, Champions of Anteria, feels muddled between something new and something old.

You start off with three “champions” in the game – Vargus, Nusala, and Anslem – with two unlocked at a later stage – Baltasar and Oona. Each is useful in different situations and to learn that, you get an intro mission teaching you who is powerful against whom; and whom they are weak against. Battles in the game are real-time, but you can hit pause whenever you like. The game also auto-pauses when new enemies approach you, to let you strategise and plan out your moves. You can queue actions for each character, be it moving, attacking, or selecting any number of the champion’s power-ups. Just as with other action RPGs of this kind, all power-ups have a cooldown effect, which prohibits you from reusing them for a limited time. Sadly, battling in Champions of Anteria is dull, repetitive and regularly frustrating. That’s down to a few reasons. One, your champions are heavily unbalanced, which causes the AI to chase after those it sees as vulnerable. Rather than facing enemies, you’ll spend your time trying to make one of your champions run around the place just to avoid attacks. Two, the variety of foes is severely limited, causing you to come across the same type of enemies. And three, only the selected champion’s abilities are available via keyboard shortcuts, which means you’ll be hitting the pause button more than necessary, just so you can queue actions with a different champion.

The last of those is possibly owing to the game’s earlier version. Kingdoms of Anteria was built to have a four player co-op mode, and would even you allow you to visit others’ kingdoms. But there is no hint of multi-player in Champions of Anteria, leaving you to control all three characters by yourself. Gaming is inherently more fun with others – even an average title such as Lara Croft and the Temple of Osiris worked better when you had someone by your side – and Anteria could have really done with same screen co-op. The game’s attempts at witty humour and dry sarcasm – the champions continuously joke about hero poses and how no foe presents a solid chance – do little to fill that void.

It is what it is
Winning in battles gets you loot and Renown, both helpful in expanding your influence and rule. Your final aim is to capture the whole of Anteria and make it part of your kingdom. You can only initiate one instance of battle per move, with access available to areas only in your immediate surrounding. Your kingdom, even when it starts to expand, continues to be counted as a single entity so you won’t have to calculate turns required to reach a certain place.

If you take on something that isn’t already owned by any faction, there is no retaliation and you only need to deal with bandits. But if you step on land that someone claims the right to – there are other tribes in Anteria as well – you’ll have to defend your prize the turn after you capture it. 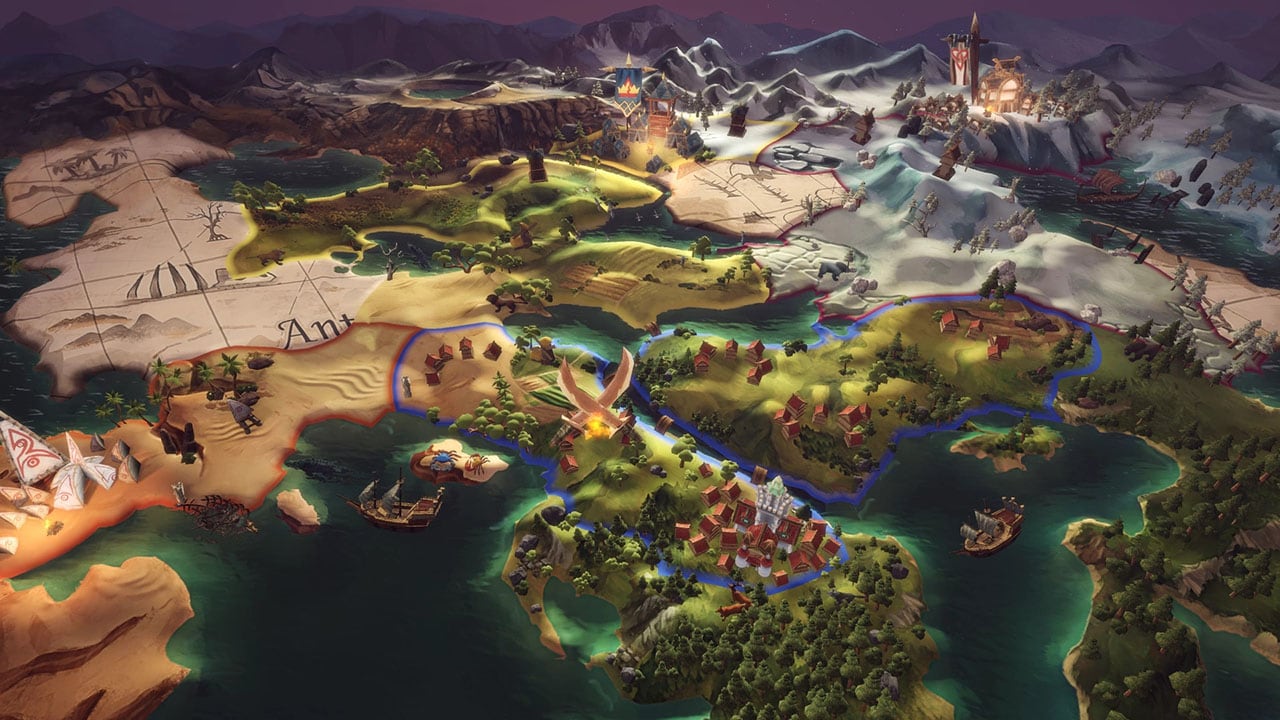 The other half of the game revolves around city building. While the name might have been changed on the front, the game still retains elements of the Settlers franchise, albeit in a limited fashion. To level up your champions, give them new abilities, build potions and weapons, you have to collect and manage seven different variables in addition to loot and Renown.

Out of the seven, there are five elements that are the defining attribute of your champions: Metal for Vargus, Nature for Nusala, Lightning for Anslem, Fire for Baltasar, and Water for Oona. These five elements interact in a zero-sum fashion, just as in rock-paper-scissors, with each cancelling out one and getting trumped by another. The other two are called Building material and Villagers, which can be increased by way of constructing specific buildings.

To gather these seven variables, you will need to plan what buildings should be built where. For example, constructing a Water material building near the river nets you more of that resource, while putting together a woodcutter (for Fire) and quarry worker (for Building) in the same area brings down total production. You also unlock better and newer buildings, potions, abilities, and weapons through a centralised skill tree, which works entirely on how much Renown you can afford to spend. 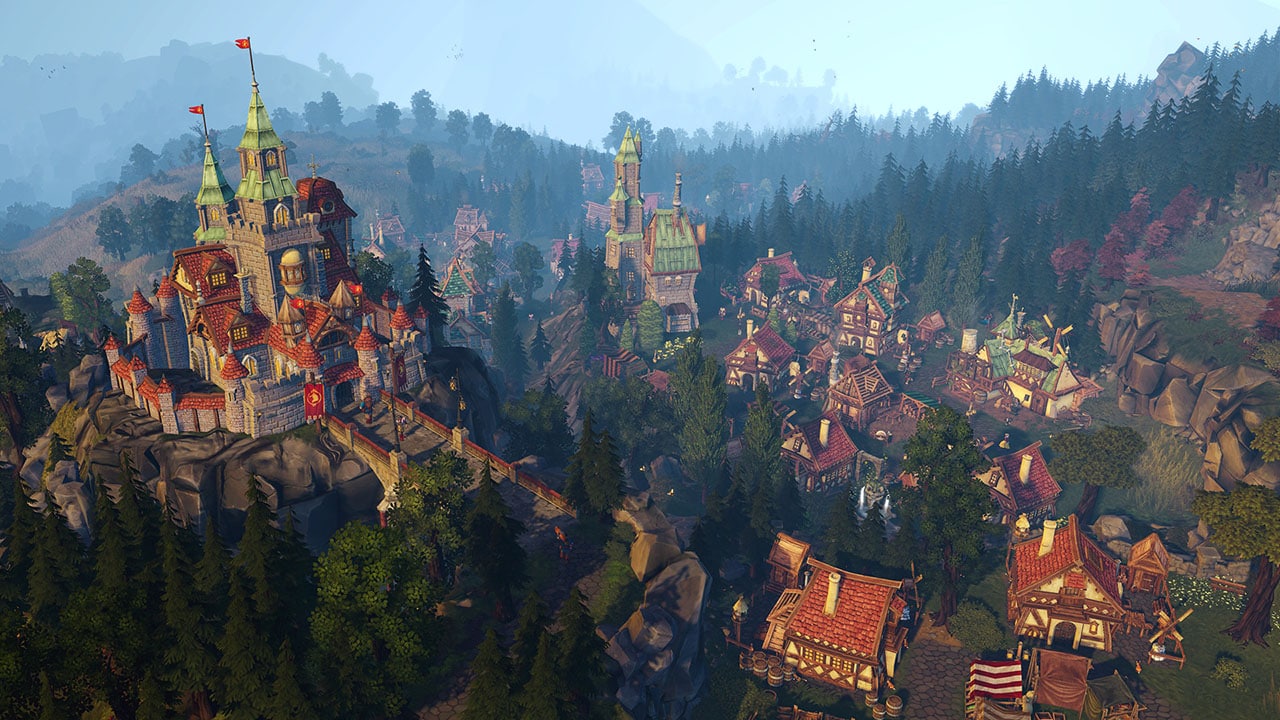 Your village, and by effect your kingdom, looks great visually in the isometric view the game affords. The people actually go about their day, and aren’t there just to fill the world you see. The best part of it though remains the animation of a new building being constructed. There is a certain charm to watching timber frames being put together. It’s a shame then that you’ll spend most of your time in battles rather than the city building elements.

Owing to the shift in development course, Champions of Anteria comes off as a confused title. It’s got its fingers in two completely different pies, and it can’t pull off even one of them properly. Its cookie-cutter approach to battles, along with the highly constrained city building elements, make it a rather forgettable experience. Thank God it doesn’t bear the Settlers name.