Call of Duty: Infinite Warfare’s inspirations are obvious. The influences of Destiny, Mass Effect, and even the 2007 classic, Call of Duty: Modern Warfare (the remaster of which is bundled with special editions of the game for good measure) are all present and accounted for in a sci-fi romp that’s as enjoyable as it is derivative.

Set in an unknown time in the future, you are in an era of robot soldiers, grenades that create anti-gravity fields, and shotguns that transform into dual-wielded pistols, and of course, space travel. All of this serves the game's premise, which - no surprise here - sees humanity at war with itself.

The Settlement Defence Front (SDF) - consisting of humans who have made Mars their home - attacks the Earth’s United Nations Space Alliance (UNSA) during a military parade. This results in all but two UNSA space-cruisers, the Tigris and the Retribution, destroyed. A series of events leads to you, Jack Reyes - a UNSA lieutenant - being promoted to Commander of the Retribution, tasked with stemming the tide against a relentless adversary.

(Also see:  The Best Call of Duty Game Is Available Again, But Does It Hold Up?)

From a slick opening mission that takes place on Jupiter’s moon, Europa, to raiding enemy cruisers for equipment and intel, Infinite Warfare manages to cram in a fair amount of variety. Not all of it is exactly original though. Sniping enemies across an asteroid field sounds unique, but in practice it's similar to the classic All Ghillied Up mission from Modern Warfare. Perusing through the tight corridors of the Retribution and interacting with your crew reminds us of Mass Effect. There’s a sense of familiarity that we can’t shake off.

This extends to the game's presentation too. It is replete with gorgeous sights, peppered with visuals that would fit right in with Destiny and pulp fiction sci-fi. There are also a fair number of cut-scenes in Infinite Warfare, which give it a more cinematic feel, something its predecessors lacked while allowing for witty banter between you and your crew. It makes them a whole lot more endearing than this game's villain, SDF leader Salen Kotch, played by Game of Thrones’ Kit Harrington.

All of these go a long way towards masking a formula that’s essentially been unchanged for the longest time. You can hack robots, throw explosives that tell you how many enemies were wounded or killed during the blast, and of course shoot a seemingly endless number of disposable soldiers right between the eyes. Some weapons have secondary modes, such the aforementioned shotguns that turn into pistols are welcome as is the Claw energy rifle that lets you inflict damage off ricochets. Gadgets galore such as a self-driving mech, grappling hook, and jetpack add another dimension to the combat. But the moment to moment gameplay doesn't feel as fast-paced as Black Ops 3, and is instead in the vein of older Call of Duty games, so if you're looking for something a bit twitchier, you won't find it here. And while the arsenal on offer is varied, they appear to have the same recoil, range, and modes as you'd expect from previous entries. 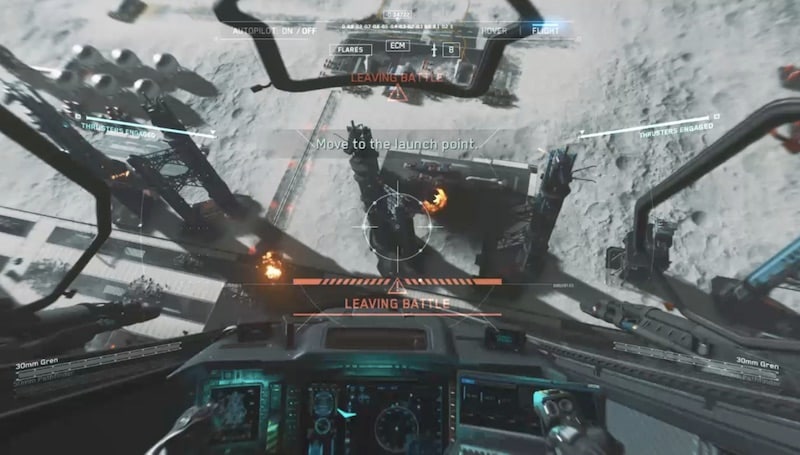 However, the big differentiator this time around is aerial combat. More often than not, missions end with battles in space. You’ll control a transforming space fighter called the Jackal, in sequences that have you locking on opposing pilots, gunning them down, and avoiding their fire, along with bigger ships to board or destroy. In terms of controls, it is simple enough, making good use of the left analogue stick to activate boosters and triggers to shoot, launch missiles, or flares to distract heat-seeking missiles. Complete with landing sequences that have you following a set path, it’s easy to get the hang of, with little to come in the way of the action. If you were expecting flying segments as difficult as GTA V, think again.

Before you know it, Infinite Warfare’s campaign has a sense of routine to it. Pick a mission from your map, customise you weapon load out as well as that of your Jackal’s, go forth and conquer, rinse and repeat. There are some side quests that flesh out the story. These involve raiding enemy ships and scuttling them, giving you better gear to take on the main missions. They’re nice additions but simply pad a campaign you can blitz through in under seven hours.

When you’re done with that, there’s Zombies. Much like Black Ops 3’s take on the mode, it’s entertaining, albeit with a caveat: you really need to play this with others. Although they ooze charm thanks to stellar voice acting and presentation, there's only so much variety in fighting through infinite zombie hordes. Playing it solo is dull and dreary. Throw in three friends though, and it's a blast through and through.

(Also see:  Call of Duty: Infinite Warfare Pre-Orders and Price Up in India) 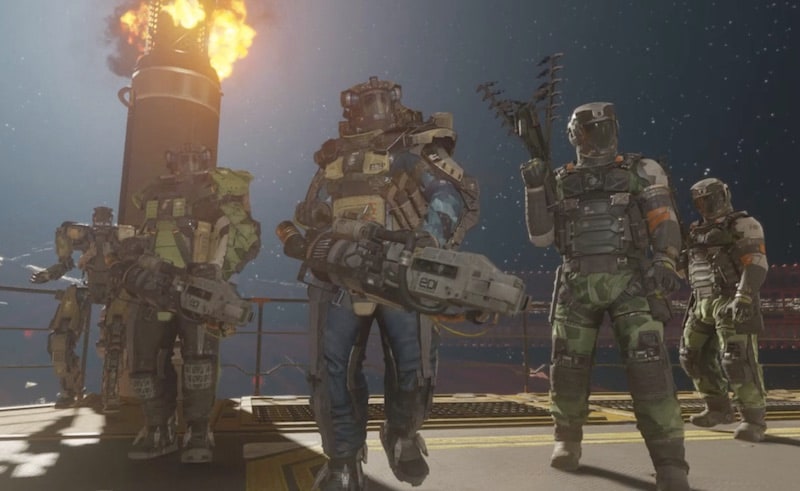 While developer Infinity Ward has dug deep to make Infinite Warfare’s single-player campaign a memorable (if hodgepodge) affair, we wish we could say the same about the multiplayer. There are classes known as Combat Rigs akin to Black Ops 3’s Specialist system. These range from the bog standard jack-of-all-trades Warfighter, to the speedy Synaptic who revels in quick kills. Despite attempts to liven up the proceedings with persistent abilities known as Traits, an interesting challenge system, and a plethora of guns, it feels generic. More so in a year that’s seen more unique, and earnest attempts from games such as Overwatch.

What makes matters worse is the game’s microtransaction model that allows players to buy weapons with better stats and upgrades. It reduces what should be a premium experience into a pay-to-win affair that shows an utter lack of respect for its customers. Though Activision claims that you will be able to craft these weapons later on, it would result in an imbalance in the player base, where skill could be dictated by spending more money in-game than others.

Nonetheless, online multiplayer was smooth and getting into a match was pain free with zero lag - no surprise since it’s early days for the game. How it holds up after release will be something we’ll be watching closely.

As it stands, Infinite Warfare is a mixed affair. The single-player is entertaining enough to keep well worn gameplay mechanics from getting stale, while the multiplayer and monetisation model are glaring points of concern. If you’re one of the many legions of fans of the series, this will do little to change your mind. But if you’re on the edge or simply looking to get it for Call of Duty: Modern Warfare Remastered (which will be sold separately later), we’d recommend waiting it out.

Gadgets 360 played a retail copy of Call of Duty: Infinite Warfare on the PS4. The game is available on the PC, PS4, and Xbox One from Rs. 3,499 onwards.

product Is Call of Duty: Infinite Warfare as good as the games it takes inspiration from? Find out in our review. 3 out of 5 stars