BlazBlue: Cross Tag Battle is a 2D fighting game featuring characters from games such as Persona 4 Arena and Under Night In-Birth, anime such as RWBY, in addition, of course, to the BlazBlue series of games. Ahead of the June 5 release date for the Nintendo Switch, PS4, and Windows PC, we spent some quality time with BlazBlue: Cross Tag Battle on PS4 and Nintendo Switch to be able to tell you what to expect.

The first thing that strikes you about BlazBlue: Cross Tag Battle is how fresh it looks. Though the BlazBlue games have been around since 2009, the cel shaded stylings still stand out with colourful visuals and intricate animations. BlazBlue staples like Noel Vermillion and Ragna Bloodedge look great as do those from Persona 4 Arena such as Chie and Yosuke. While characters in BlazBlue: Cross Tag Battle span across multiple franchises, the art direction is good enough to ensure a sense of cohesiveness in terms of proportions as well visual design such that you won’t be faulted for thinking they’re all from the same fictional universe.

At the same time, each of the character’s moves — from standard attacks to over the top combos have enough flair to remind you where they’re from, particularly in the case of Persona 4 Arena fighters summoning their personas — spirits that let their users wield amazing strength. 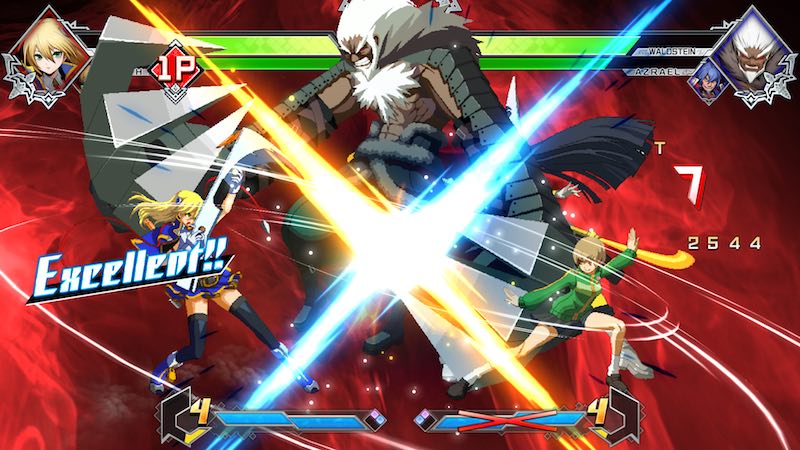 However, this stellar presentation isn’t without its flaws, at least on the Nintendo Switch. Playing as a character from RWBY such as Ruby or Weiss against those from any other series shows off a subtle difference in the quality of character models. Specifically, those from BlazBlue, Persona 4 Arena, and Under Night In-Birth look slightly low-res in comparison, particularly during the intro sequence for each match and in sections when all characters are perfectly still, which, admittedly, isn’t very often.

It isn’t a dealbreaker by any means and tends to rear its head particularly when you play in docked mode. That said, the PS4 version didn’t suffer from such issues thanks to that version of the game sporting anti-aliasing which the Nintendo Switch version lacks, making the PS4 the platform of choice if you’re a stickler for sprites.

In terms of gameplay, all fights are two on two similar to Marvel Vs. Capcom: Infinite and you can choose characters from different universes. You can pull off light attacks, heavy attacks, throws, and even call in your ally in battle to perform some devastating combos. It’s easy enough for newbies to partake in with a few moments of brilliance on each button press, while those looking for depth will revel in its Reversal Actions and Clash Assaults. The former lets you land a hit when your opponent is on the offensive, while the latter lets you multiply the amount of damage done with well-timed button presses.

Thanks to a series of detailed tutorials referred to as Tactics Mode that explains each and every technique. This includes instructions on how to weave past projectile attacks as well as the invincibility granting Resonance Blaze. All this means there’s enough for fighting game veterans and newcomers alike to partake in. 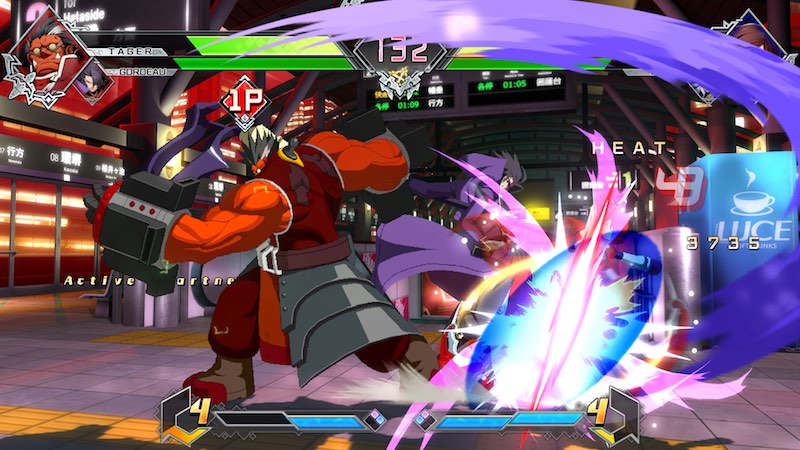 Aside from Tactics Mode is BlazBlue: Cross Tag Battle’s story mode. It puts most fight game campaigns to shame, which isn’t saying much considering how poorly its been done in most games of this generation in the genre outside of Injustice 2. That said, the script is entertaining enough and features multiple paths allowing you to obtain different endings similar to visual novels. This gives you the chance to play as characters you may never have considered otherwise. You don’t have to be a fan of any of its featured franchises to understand its plot either. Without spoiling much, it’s definitely one of the game’s highlights.

Apart from a stellar story mode, there’s multiplayer, both offline and online. While the former is straightforward versus matches on the same console, the latter had some interesting quirks. Playing BlazBlue: Cross Tag Battle online on the Nintendo Switch was a lag-free affair if you don’t skip the introduction cinematic prior to a match. If you do, it introduces some obvious stutter to the game. This wasn’t the case on the PS4 version of the game which ran fine regardless. Hopefully, the Nintendo Switch gets a patch to rectify this.

All in all, BlazBlue: Cross Tag Battle is an excellent fighting game. Thanks to gorgeous presentation, robust mechanics, and an entertaining story mode, it stands out as one of the better, if not the best fighting game this generation. It might not have the lineage of its competition, but it’s got more than enough to warrant a purchase.

Gadgets 360 played BlazBlue: Cross Tag Battle on PS4 and Nintendo Switch. The game is available on PS4, Nintendo Switch, and Windows PC priced at $50 (around Rs. 3,354).