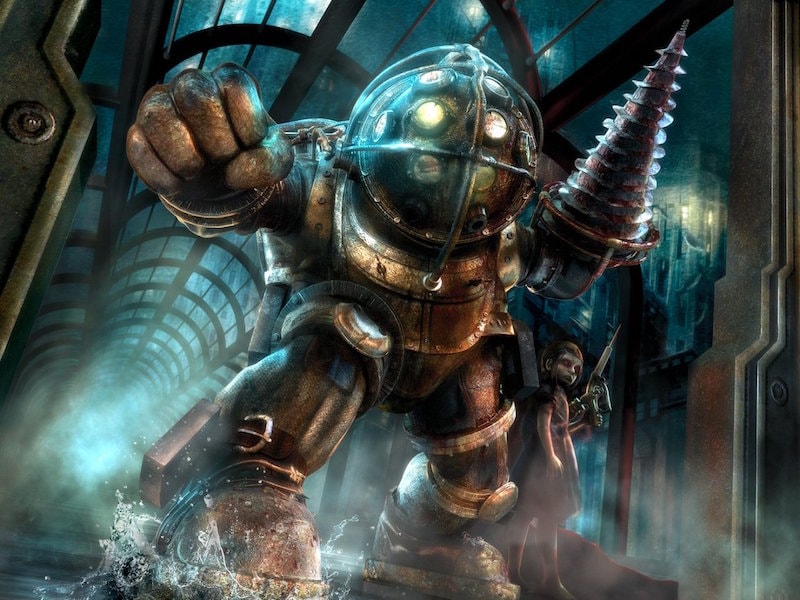 Bioshock was one of the standout series of previous console generation, and the games fused political and philosophical thought with over the top action as you set deranged drug-addled foes alight with fire from your finger tips. Like most of the PS3 and Xbox 360’s greatest hits, BioShock, BioShock 2, and BioShock Infinite now find their way to the PS4, Xbox One, and PC as BioShock: The Collection.

The core gameplay across all three games is the same with a few minor differences. You’ll explore unbelievable, yet fully realised, vistas, uncover plot points via recorded messages or the odd cut-scene, gun down enemies with an assortment of fire-arms or use plasmids (or vigours as they’re called in BioShock Infinite) that let you electrify or incinerate your enemies, or even summon a swarm of bees to devastate your opponents. The series still holds up well from a gameplay perspective, even though the first game debuted nearly 10 years ago. As for each individual release? Is the visual upgrade enough to warrant checking this trilogy out?

(Also see: BioShock: The Collection Cannot be Live Streamed on the PS4 and Xbox One)

First up is the game that started it all - the original BioShock. Without spoiling much, you find yourself in Rapture - an underwater husk of a city complete with an 1950s art deco aesthetic and a failed, mysterious ruler named Andrew Ryan. As you uncover its many secrets, you’ll realise how many games borrowed from BioShock and its predecessor - System Shock - with audio logs telling a story and an atmosphere that’s immersive to the point of being oppressive. It looks every bit as good as it was the first time around.

From dilapidated restaurants to the hulking Big Daddies - guardians of this one time paradise - Bioshock is a treat for the eyes. The only complaint is an awkward control scheme that’s unintuitive compared to the games that succeeded it, requiring you to press the triangle button to jump, and holding down the left analogue stick to crouch. It worked for its time, but not having the option to pick a control scheme more in sync with the modern times is disappointing. However, it’s the only game from the three that lets you toggle field of view (FoV) to increase depth, though again the implementation is a little odd, as most games instead offer a slider to allow users to select the FoV they are most comfortable with.

Next up is BioShock 2 - the black sheep of the series for many. People felt that a return to Rapture took away the novelty factor, and also, the game introduced a multiplayer mode which was not well received. Bioshock 2 takes place 10 years after the events of the first game, and in our opinion, manages to hold its own with some new gameplay additions - namely putting you in the role of a Big Daddy rather than a mere human, as you set to stop a sinister cult led by Dr. Sophia Lamb. Bioshock 2 is an interesting take on the first game’s premise and is highly underrated. It too benefits from the reworked graphics and additional horsepower of current generation consoles. While you can change the controls here, it misses out on the FoV toggle of the original.

Finally we have BioShock Infinite. It forsakes the underwater 1950s stylings of the first two games for Columbia - a city in the clouds. Along with familiar gameplay mechanics from the first two games you’ll find yourself using a hook to zig-zag across firefights via rails. It gives another dimension to the combat as you search for Elizabeth - a girl held captive by Zachary Comstock, a self-proclaimed prophet. While the first two instalments look a lot better than they did compared to their initial release, Infinite just gets sharper edges and improved lighting. That's not to say there was no work done it - it’s just that there isn’t a massive difference compared to how it played on the PC during its initial release in 2013, which also explains why it didn’t get a re-release on PC.

Speaking of the PC version, it’s home to a host of issues. The games' visuals haven’t improved as much as you’d expect and keyboard and mouse support isn’t what it should be what with mouse sensitivity not working - an issue that was there with the first game, making a comeback. It doesn’t help matters that both BioShock and BioShock 2 are missing options such as field of view and advanced graphical settings which are expected for a modern PC release, though 2K claims it will release an update to fix these problems. On all platforms, the frame rate dips below 60 frames per second every now and then, even on our GeForce GTX 1060-powered PC.

Despite all of these issues, 2K has packed in a host of extras with BioShock: The Collection. These include all the downloadable content (DLC) from the games and commentary featuring series creator Ken Levine. BioShock 2’s multiplayer mode is missing which should surprise no one considering the number of people who played it was pretty much zero.

If you have a PS4 or Xbox One, BioShock: The Collection is the best way to experience the series if you never played them before. For existing fans on consoles, it’s a convenient compendium for a series that’s begging for a new entry.