Big Ant Studio is one of the few companies in the world that makes cricket games for PC and consoles. With Don Bradman Cricket 17 and Ashes Cricket under its belt, the company has now released Big Bash Boom, the official cricket game for Big Bash League, Australia's premier T20 cricket tournament.

While the focus of Ashes Cricket was on realism, Big Bash Boom's highlight is over-the-top gameplay. You can do crazy things like score 12 runs off a single ball (pretty much impossible according to the rules of cricket), bowl a 200kph delivery (the fastest ever recorded in world cricket is around 161kph), and even set the pitch on fire so the opposition can't run between the wickets.

These outrageous features set the tone for Big Bash Boom. The game doesn't take the rules of cricket too seriously and tries to make itself accessible to those who don't follow the sport. This approach reminds us of the FIFA Street series of games, which were football games with crazy power-ups and Shaolin Soccer-esque team moves. In Big Bash Boom, all players and umpires look like 3D caricatures with extra large heads and small bodies.

The animations in Big Bash Boom feel like an evolution of the Big Bash Cricket mobile game. When you've sweetly timed a shot and it's heading into the stands for a six, you can see a glowing trail behind the ball. Sometimes, if you hit a yorker length delivery for a six, there's a slow-motion cutscene that shows you launching it into the air. The array of shots you can play has been carried over from Ashes Cricket, but the realism has been toned down. Even if you don't hit a ball in the perfect area, sometimes it will sail through for a six. We noticed this even on hard difficulty — something that was quite tough in Ashes Cricket. The cinematic scenes in Big Bash Boom are also nicely done. Get out without scoring and your batsman will be mocked by a giant dancing rubber duck as they walk back to the pavilion. This adds a fun element to the game, which is nice to have. 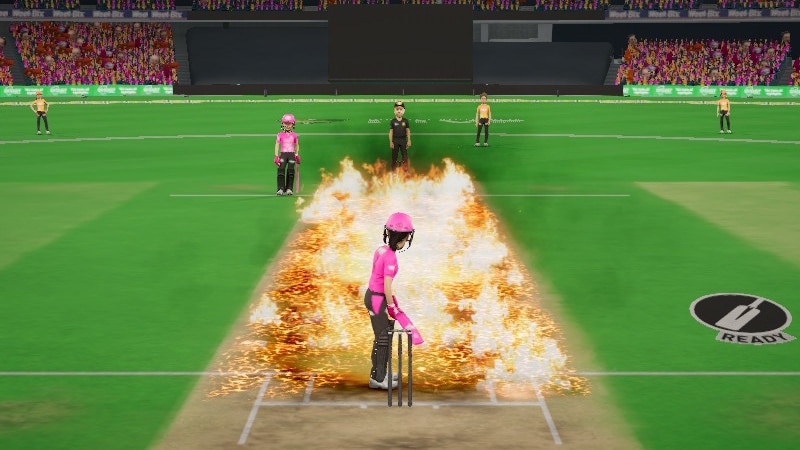 Power-ups let you score a lot or stop the batsmen from scoring.

The gameplay in Big Bash Boom is pretty easy to pick up. For batting, the left analogue stick decides the direction of the shot and each of the four buttons on the controller plays a different kind of a shot. A little bit of trial and error will help you figure out which shots work best and most people will move to hard difficulty really quickly because the other two difficulty levels are way too easy even for beginners.

Bowling is a lot more challenging especially in hard mode because the pitch of the ball keeps changing. So you have to keep adjusting it with the left stick while the bowler is running in and hit another button to ensure that you don't bowl a no-ball. Before all that you can choose from eight different types of deliveries per bowler. The game shows you four at a time and you can hit the shoulder buttons to see four more styles of deliveries. The animations for bowling aren't anywhere near as great as those for batting. We'd have loved to see a meteor-like flaming trail behind a delivery bowled at 200kmph for dramatic effect, but there's no such joy to be had with Big Bash Boom.

We do love the power-up system in Big Bash Boom. Keep the score down in an over while bowling, or score a lot while batting, and your power-up meter will fill to the brim, after which you can enable the power-ups. Each of these is enabled after really cool animations that remind us of ultimate moves in fighting games such as Injustice 2. Power-ups allow you to score more runs, prevent the batsmen from running, and much more. These vary with the team you choose.

While batting and bowling are fun, fielding is almost completely automated in Big Bash Boom. When the ball is with any fielder, you can press a button to throw the ball to the keeper's end or the bowler's end, and other than that there's nothing you need to do while fielding. We still find this to be the weakest point of the game, and it's honestly a bit baffling to see this year after year in Big Ant Studio's console games. In Big Bash Boom, we've seen the keeper diving to the right and somehow catch a ball that went six metres to the left. The ball is thrown to the keeper and she magically catches it without moving her hands at all. Fielders appear to be ball-watching way too many times, and sometimes even though they appear to have successfully taken a catch, the batsman is somehow not out. 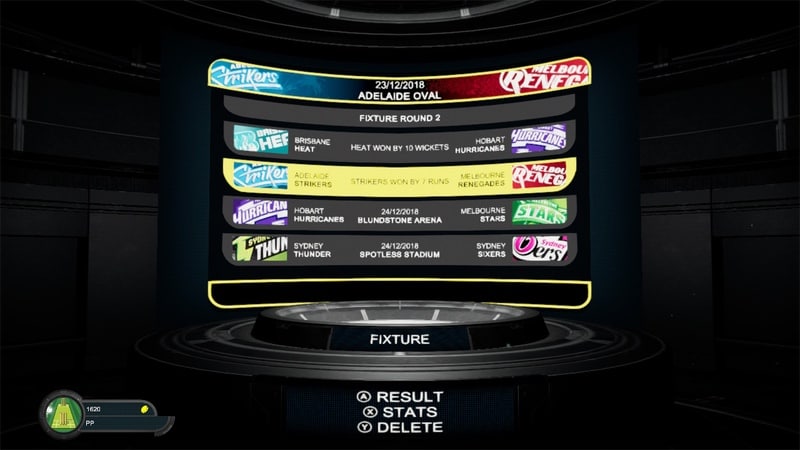 Big Bash Boom has low-res menus on the Nintendo Switch

Having said that, the core loop is quite fun with Big Bash Boom. You can play one, five, 10, or 20 over matches, which is great. However, even a simple five-over match takes half an hour to complete due to some strange design choices. After every single delivery is completed, you will see a splash screen with the words, “BIG BASH BOOM.” This is probably expected on a mobile game, but not in a premium game for consoles. We got annoyed with these splash screens within minutes. We were also very disappointed with the performance of the game on the Nintendo Switch. All cutscenes were very laggy, and basic things such as starting a match or the interval between two innings took way too long to load. The menus in-game also looked pretty low-resolution and we could barely read the names of the players on the customisation screen. When you scroll through a list of players, the caricatures next to each player name take time to load too. It looks just a bit better in docked mode, though long loading screens are still prevalent.

Even if you ignore these performance issues, which is a big task, Big Bash Boom has a lot of flaws. The game has just two main modes — casual and tournament. There's a third mode where you can customise the players' attire or other in-game elements such as the ball. These are unlockables that can be obtained through in-game currency earned by playing the game. You can also unlock new celebrations simply by playing. All this is good, but is purely cosmetic. Once we chose a potato instead of the ball, but didn't notice any difference in gameplay. We do feel that quite a lot of these items take too much grinding to unlock, and the game isn't addictive enough for this to be overlooked.

Big Bash Boom could have been an excellent over-the-top game to play for fans of Big Bash League. However, in its current form it feels like it was rushed to the market without enough testing, and suffers a lot because of that. We love the cutscenes, and the core batting and bowling experience in this game, along with the power-ups. Unfortunately, the fielding AI, overuse of splash screens, performance issues, and unnecessary grinding make Big Bash Boom feel tedious to play and a downgrade over some of the achievements of Ashes Cricket.