Set in a world where magic and science coexist, your airship has crash-landed on an unknown continent. Your crew is scattered across the land, and it's up to you to find them. What starts off as a basic fetch quest of reuniting your not so merry band of adventurers, turns out to be a much grander tale, naturally.

Along the way, you’ll explore mysterious dungeons, square off against haunted suits of armour, anthromorphic wolves, and giant robots, while visiting a slew of locales. From a fishing wharf led by a talking shark called Fishmonger, to a town that is host to an eccentric plague mask-wearing merchant, Battle Chasers: Nightwar’s settings have no shortage of interesting non-playable characters (NPCs). Not only do these characters sport fresh designs, but they are well-voiced too.

Backed up with a suitably epic soundtrack and fantastic comic book-inspired visuals (no surprise since it’s based on a 90s comic by the same name), the production values of Battle Chasers: Nightwar are surprisingly solid, to say the least. It's even more impressive when you consider that the developer, Airship Syndicate, is just a twelve person team.

All of this complements the core gameplay loop of combat and exploration exceedingly well. In terms of the latter, you’ll navigate your party across a map, encountering enemies along the way in addition to finding dungeons teeming with lore, loot, and of course, combat. In Battle Chasers: Nightwar each dungeon consists of about eight to ten rooms, drawn from a pool of around 30 to 40 possibilities. What this means is, you don’t see everything the first time around ensuring multiple playthroughs result in better gear.

If you’re in it purely for the story - as a decent chunk of information related to the world, important events, and its inhabitants are found in these areas - fret not, as the game helpfully indicates when you’ve collected each story note, and doesn’t repeat them, which we experienced first-hand after going through areas several times.

A large part of Battle Chasers: Nightwar has you up against an assortment of monsters, thieves, and other such enemies in need of a stern beating. With turn-based combat that’s not too dissimilar to older Final Fantasy games and Chrono Trigger, it’s easy to get a hang of what to do - simply attack or defend when it’s your turn. 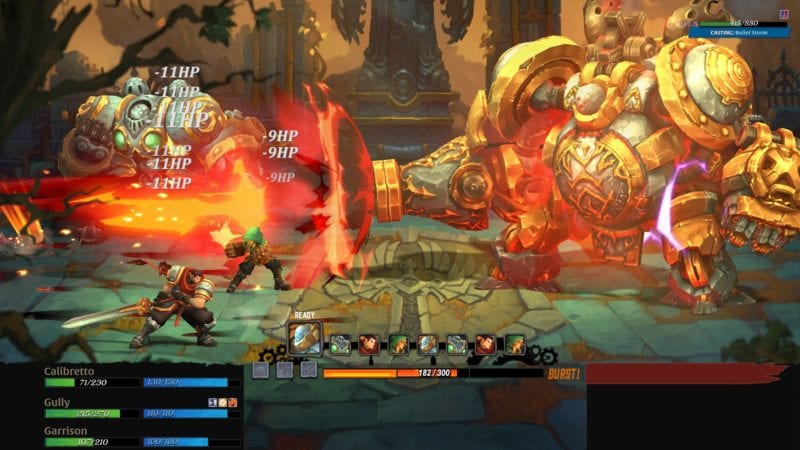 But to call Battle Chasers: Nightwar’s combat a clone of classic RPGs would be doing it a disservice. There are a slew of little improvements that make for a drastically better experience. Being able to see what spell your opponent plans on casting allows you to pre-empt them by using defensive skills such as Parry, while standard attacks give you Overcharge (a surplus of magic points), allowing you to use better abilities as the battle proceeds. And then there’s Burst - a common meter shared between your characters. When it's full, any of them can make use of Burst to execute a devastating attack, or heal your party, depending on the character that uses it.

These tweaks and additions to standard turn-based combat make Battle Chasers: Nightwar extremely refined and surprisingly fulfilling. You’ll find yourself resorting to variety when in fights because Overcharge doesn’t carry over to the next battle, making it a waste not to use, and defensive abilities like casting a shield that are rarely used in other games end up being considered seriously, because you know when you’re going to be on the receiving end of monumental damage.

Delving deeper into the game’s menus, you’ll notice each character has their own traits and perks that can be modified as you see fit. Do you think war golem Calibretto is of better use by healing your squad instead of gunning down foes? You can simply allocate all his trait points to boost those abilities. It adds a level of customisation that gives you a good amount of control over how you use your team in battle.

As for the characters themselves, they’re a diverse bunch. From the straight talking, no nonsense swordsman Garrison, to the sarcastic, 500 year old wizard Knolan, their varied personalities come to the fore in their interactions leading to some welcome banter. They aren’t as chatty or complex as say, some of the characters from Dragon Age: Inquisition, but there’s more than enough to keep you invested during Battle Chasers: Nightwar’s duration. 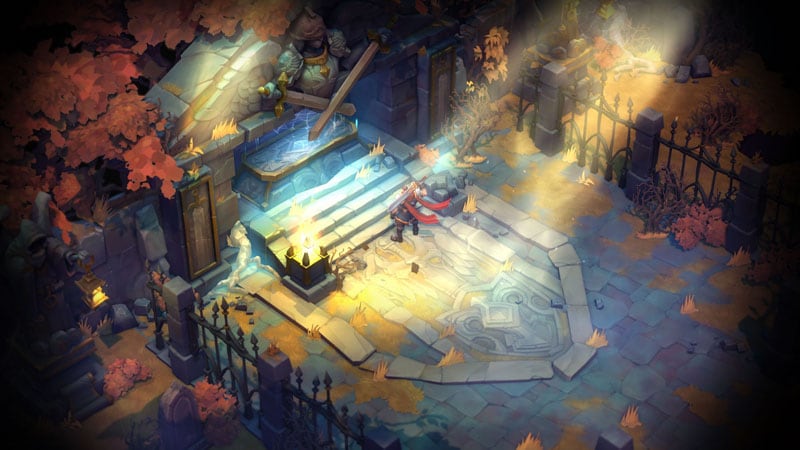 However its not perfect. At the time of writing this, we’ve noticed some long loading times on the PS4 version of the game when entering areas or in some combat sections. Granted console games running the Unity engine have their fair share of teething issues, but this is minor compared to others who have seen their entire progress erased and multiple crashes.

Historically, games developed in Unity have had fewer issues on the PC, making it the platform to play Battle Chasers: Nightwar on. Having said that, Airship Syndicate is working on a day one patch, though it remains to be seen if these bugs are indeed ironed out on consoles when the game hits on October 3.

It clocks in at around 20 hours not including side-quests, which considering its Rs. 899 ($30 in the US) price tag is pretty good value for money, at least on the PC. Battle Chasers: Nightwar’s PS4 version’s India price is Rs. 2,475 doing it no favours. A Switch version is in the works as well.

If you can stomach its technical imperfections, the addictive loop of combat and exploration combined with a great roster of characters, and excellent production values make Battle Chasers: Nightwar well worth checking out. It might not be the biggest release of October but it’s definitely one of the most enjoyable yet.

product Inspired by Final Fantasy, is Battle Chasers: Nightwar from Darksiders veteran Airship Syndicate any good? We tell you. 4 out of 5 stars